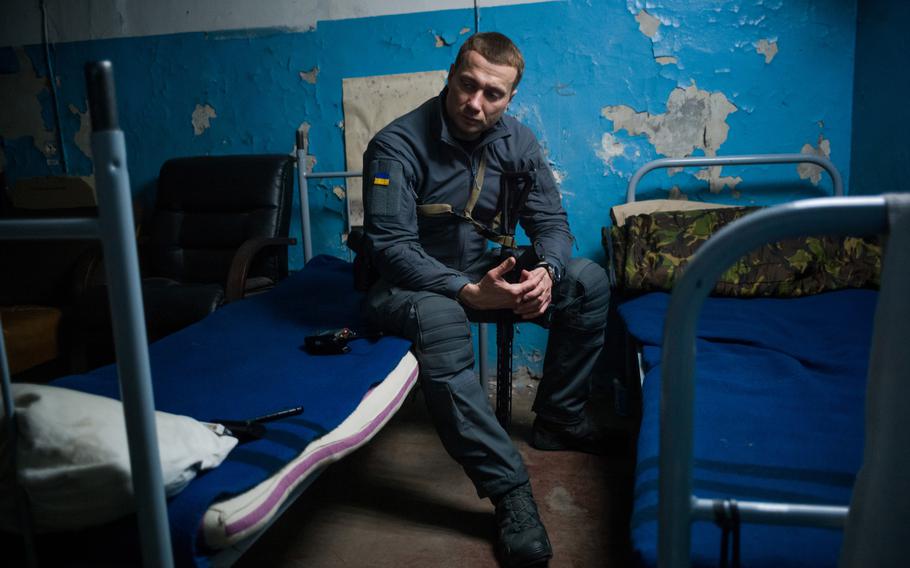 Pavlo Kyrylenko, governor of the Donetsk region, sits on a bed in a bomb shelter in Kramatorsk, Ukraine, on March 29, 2022. (Wojciech Grzedzinski/The Washington Post)

As Russia appears poised to capture Mariupol more than six weeks into the invasion, the governor of Ukraine’s Donetsk region said Friday that while Ukrainian troops remain in control of the strategic port city, Mariupol “has been wiped off the face of the earth” by Russian forces.

Pavlo Kyrylenko, the governor, told CNN that troops are still “courageously defending Mariupol” against the Russian forces that have bombarded the city on the Sea of Azov, leaving it in ruins.

“The enemy cannot seize Mariupol. The enemy may seize the land that Mariupol used to stand on, but the city of Mariupol is no more,” Kyrylenko said. “The city of Mariupol has been wiped off the face of the earth by the Russian Federation, by those who will never be able to restore it.”

Russian troops have laid siege to Mariupol for more than a month, cutting its citizens off from food, water, heat and humanitarian aid with few exceptions. Russian troops have been carving sections of the city from Ukrainian control.

Analysts are predicting it will probably become the first major Ukrainian city to fall in the coming week. Occupying Mariupol would give Russia control of the Sea of Azov coast and serve as a land bridge between Russian-held territories in eastern Ukraine and the Crimean Peninsula, which Russia took from Ukraine in 2014.

The situation in Mariupol remains “complicated,” Oleksandr Motuzyanyk, a spokesman for Ukraine’s Defense Ministry, said Friday at news briefing. Motuzyanyk claimed that Russia is still focused on attacking industrial areas and the port of Mariupol, and that invading forces intensified their shelling in using a Tu-22М3 long-range bomber to attack the city for the first time.

“But the Russians have not managed yet to fully take control of the city,” he said.

The ongoing destruction in Mariupol comes as the United Nations has renewed calls for civilians to be given safe passage out of the besieged city. Humanitarian agencies have been trying to facilitate safe-passage corridors out of Mariupol for weeks, with mixed success. Around 100,000 people are still believed to be inside the city that had a population of 450,000 before the war began.

“Tens of thousands of civilians in Mariupol — which has been an epicentre of horror since the conflict began — and in other locations around Ukraine have now endured 50 days of violence and shelling,” Martin Griffiths, U.N. undersecretary general for humanitarian affairs, said Thursday in a news release.

Griffiths added, “I urgently call on the parties to the conflict to comply with their obligations under international humanitarian law to protect civilians, homes and civilian infrastructure across Ukraine.”

While Ukrainian troops have slowed down Russia’s efforts to claim Mariupol, Russia’s Defense Ministry claimed a further advance on Friday, saying its forces are now in full control of Mariupol’s Ilyich Iron and Steel Works.

But Ukrainian forces in Mariupol are maintaining their hold on the Azovstal steel plant, one of the largest metallurgical factories in Europe. The Azov Battalion, one of Ukraine’s most skilled — and controversial — military units, defended the sprawling steel plant in the city’s east against repeated assaults this week, according to the Washington-based Institute for the Study of War. A photo shared by a reporter for the Kyiv Independent newspaper appeared to show smoke billowing from the heavily industrial area.

Azovstal is run by Metinvest, which produced about 45 percent of Ukraine’s steel output last year. The company, which produces millions of tons of iron, steel and finished rolled products per year, is owned by billionaire Rinat Akhmetov, Ukraine’s richest man.

Eduard Basurin, a pro-Moscow separatist leader, said Monday that he expected Russian forces to use “chemical troops” at Azovstal to “smoke moles out of their burrows,” the institute reported. The Azov Battalion, which is associated with far-right nationalism, later claimed that Moscow had used chemical poison against troops in the region. The United States and several international organizations are investigating the allegation.

By many accounts, Mariupol has experienced some of the invasion’s worst atrocities. In March, Ukraine accused Russia of striking a maternity hospital there; videos and photos of the aftermath show children and bloodied pregnant women fleeing. A week later, a drama theater where hundreds were sheltering was bombed — even though the word “children” in Russian had been painted on the floor outside.

Mariupol Mayor Vadym Boychenko told the Associated Press that at least 21,000 people have been killed in Mariupol, with bodies “carpeted through the streets.”

On Friday, Kyrylenko said that Ukrainian and Russian forces may engage in a major battle in Mariupol in the next several days. He noted that while Russia has suffered losses in armor and personnel in Mariupol, the governor had “not seen a full-scale offensive in all directions as we expected” and that the city remains under Ukrainian control.

“The Ukrainian flag flies over the city of Mariupol,” he said.

Looking forward, Kyrylenko told CNN restoring Mariupol one day is “only something Ukraine can do.”

“That is something the Russians will never be able to do,” he said. “So the city of Mariupol is no more.”

The Washington Post’s Julian Duplain and Paul Sonne contributed to this report.