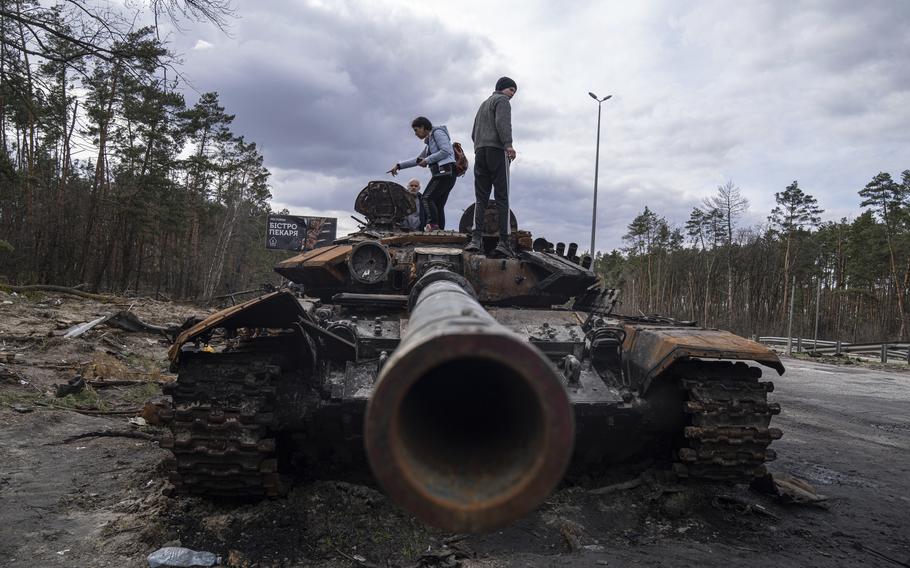 Local residents stand atop of a Russian tank damaged during fighting between Russian and Ukrainian forces in the outskirts of Kyiv, Ukraine, on Monday, April 11, 2022. (Evgeniy Maloletka/AP)

Reports of the chemical attack circulated on social media, prompting chief Pentagon spokesman John Kirby to release a statement that noted the U.S. was aware of the reports but could not confirm their accuracy.

“These reports, if true, are deeply concerning and reflective of concerns that we have had about Russia’s potential to use a variety of riot control agents — including tear gas mixed with chemical agents — in Ukraine,” Kirby said late Monday.

The defense official on Tuesday said the U.S. continues evaluating the allegations and are “taking it seriously.”

“The Russians have a history of using chemical agents, and they have shown a propensity in the past,” said the official who spoke on the condition of anonymity.

On March 10, Russia falsely claimed it found evidence of a U.S.-supported biological weapons program in Ukraine. The official warned at the time that the accusation could mean Russia intended to use such weapons themselves.

“We have picked up indications that the Russians could be making these false claims about U.S. and Ukrainian work in biodefense as a way of creating a pretext of their own to perhaps use these kinds of agents in an attack,” the official said at the time.

The southeastern Ukraine city of Mariupol also has been subject to continued airstrikes as the Russians focus their attack on the eastern part of the country, which is home to the separatist Donbas region.

Capturing Mariupol would offer Russia logistical benefits because it is south of Donbas and on the Sea of Azov, Kirby told reporters Tuesday at the Pentagon.

“Our assessment today is that Mariupol is still contested and that the Ukrainians are still fighting to defend [it],” he said. “It's a major port city [and] would provide [Russia] unfettered and unhindered land access between the Donbas and Crimea."

Russia has controlled Ukraine’s southeastern Crimean Peninsula since it last invaded the country in 2014.

After more than five weeks of assaults throughout Ukraine, the Russian Defense Ministry last week said the war was launched to “liberate” the Donbas region. However, U.S. officials believe Russia first intended to take the Ukraine capital of Kyiv but changed focus to the east after making little progress in capturing it.

A 40-mile-long Russian military convoy moving toward Kyiv in the war’s early days was stalled about 15 miles outside the capital city for more than a month after food and fuel shortages, as well as Ukrainian resistance attacks, stopped Russian tanks and troops from advancing.

That convoy never made it to Kyiv, which along with Chernihiv is now free of Russian ground troops after Russia switched focus to eastern Ukraine, a senior U.S. defense official said last week.

Russia launched a new convoy into eastern Ukraine over the weekend, which includes personnel and armored vehicles. It is moving south and is now about 37 miles north of the eastern Ukraine city of Izyum, the official said.

“We do assess that it's moving, but not at breakneck speed,” the official said. “We think it's also intended for resupply — perhaps an effort to amend their poor performance and logistics and sustainment in the north.”

So far, the U.S. has seen “no indications” that the Ukrainians have attempted any attacks on the convoy, which is “staying on highways and avenues,” the official said.

Since the start of the war, Russia has launched more than 1,540 missiles, the official said.