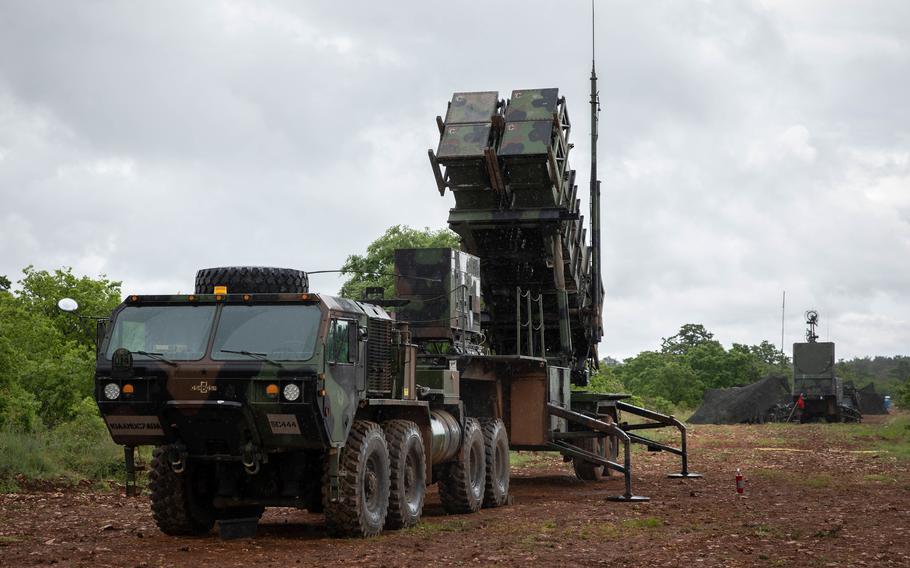 Pictured here is an Army Patriot missile system of the 5th Battalion, 7th Air Defense Artillery that arrived in Croatia on May 17, 2021, to participate in DEFENDER-Europe 21 associated exercises Astral Knight 21 and Immediate Response 21. The Pentagon announced Friday, April 8, 2022, that the U.S. is deploying a Patriot missile system to Slovakia, along with troops to operate it, after Slovakia sent a long-range, anti-aircraft battery to Ukraine. (Sgt. Alexandra Shea/U.S. Army photo)

WASHINGTON — The U.S. is deploying a Patriot missile system to Slovakia, along with troops to operate it, after Slovakia sent a long-range, anti-aircraft battery to Ukraine, chief Pentagon spokesman John Kirby said Friday.

Ukrainian officials have been asking other countries to donate the S-300 anti-aircraft system, which is a Soviet Union-era equivalent to the U.S. Patriot missile system, to help beat back the Russian invasion that began Feb. 24.

Kirby did not say how many U.S. troops would accompany the Patriot missile system to Slovakia, but he said the deployment would help ensure “that their air defense can be preserved” as Russia continues its war on neighboring Ukraine.

“It's part and parcel of the larger effort that we've been doing now for quite some time to bolster NATO's eastern flank and improve our deterrence and defense capabilities there,” Kirby told reporters at the Pentagon.

It remains unclear when the deployment will begin and how long it will last, but he said it will be “temporary.”

“We’re grateful for [Slovakia’s] willingness to help out Ukraine with this critical need particularly as the war in Ukraine now enters a new phase with a stronger focus by the Russians on the Donbas [region],” Kirby said.

For the past week, senior U.S. defense officials have said Russia is now focusing more on the eastern region of Donbas, home to separatist cities Donetsk and Luhansk. Russia recognized these cities as independent of Ukraine days before invading the country.

The shift of focus comes as all Russian fast-response ground units that once surrounded the Ukraine capital of Kyiv and a second northern city Chernihiv moved back to neighboring Belarus to resupply and refit their forces, a senior defense official said Thursday.

"There's just nothing left of the [units that left Ukraine] except the handful of troops and maybe a small number of vehicles, and they're going to have to be reconstituted or resupplied,” the official said Friday. “We've seen others that are down 30% manpower, or even higher."

However, Russia still has about 80% to 85% of the troops and combat equipment it initially deployed for the invasion six weeks ago, according to the senior U.S. defense official.

Now that combat power will be focused on the Donbas region, it could make Russian forces more lethal than when they had sent units to attack multiple cities in northern, southern and eastern Ukraine, the official said.

“That’s going to be concentrated now in a more confined smaller geographic area [in the Donbas,]” the official said. “Earlier on in this invasion they were working on three massively separate lines of access."

Since the start of the war, Russia has launched more than 1,500 missiles at Ukraine, the official said.