Sen. Duckworth calls for ‘nonpolitical’ probe into 20 years of failures in Afghanistan 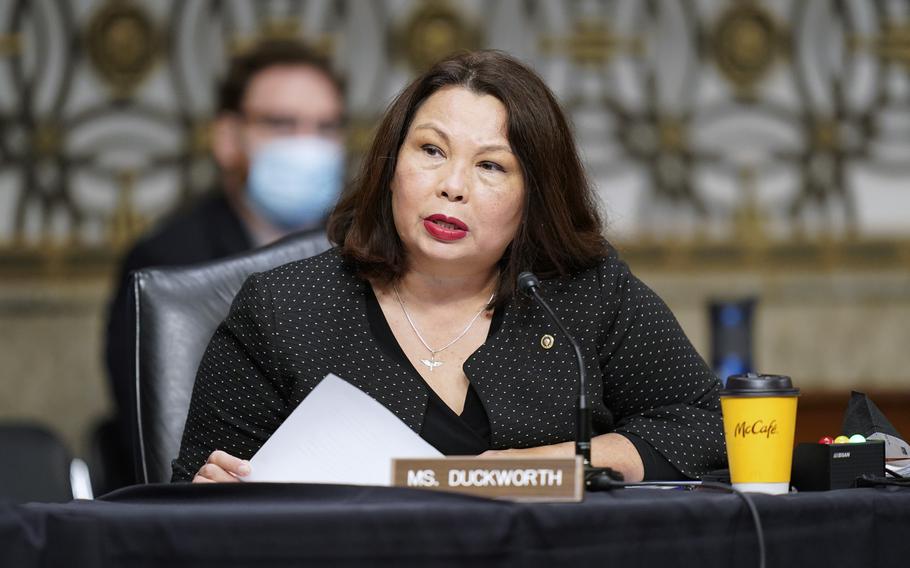 Sen. Tammy Duckworth, D-Ill., introduced legislation on Thursday to create an apolitical commission to study 20 years of American war in Afghanistan, an effort she hopes would keep the United States from repeating mistakes made during years of conflict after the 9/11 terrorist attacks.

The Afghanistan War Study Commission would be charged with taking a “deep dive” into every aspect of the war, including top level strategic decisions, combat operations, efforts to train Afghan forces, intelligence work, diplomatic efforts, congressional oversight and corruption in the U.S.-backed Kabul government, Duckworth said Wednesday. She will offer the bill as an amendment to the fiscal 2022 National Defense Authorization Act, the must-pass annual legislation that sets Pentagon funding and policy priorities.

“What we need to do is really glean all the lessons learned,” said Duckworth, an Army veteran. “You know the [military’s] war colleges are going to be looking at this forever. So, what I want to do is create this commission that will not have anybody leading it who was in a … decision-making position [on Afghanistan] during the 20 years.”

She said the commission would be molded in the form of the independent, bipartisan 9/11 Commission set up in 2002 to examine the terrorist attacks that launched the next two decades of war in Afghanistan. The body would examine the entire war from the initial U.S. invasion in the weeks after 9/11 until the last soldiers left just before midnight on Aug. 31.

Commissioners would be “experienced policy professionals” chosen by the chairpersons and ranking members on the House and Senate Armed Services, Intelligence, and Foreign Affairs committees, according to the legislation. President Joe Biden would also add one member to the panel.

Duckworth also noted the panel would have to maintain a nonpolitical nature, a lesson that she said she learned from serving on the Select Committee on Benghazi — the congressional panel the spent nearly two years probing the deadly 2012 attacks on a U.S. facility in Benghazi, Libya. That committee, she said, became bogged down in politics instead of a thorough examination of incident.

The Pentagon has said about 800,000 American troops served in the war in Afghanistan. Among them, 2,461 were killed in action and more than 20,000 others were wounded. Duckworth understands those kind of sacrifices. The retired lieutenant colonel in 2004 was permanently crippled when her Black Hawk helicopter was struck by enemy fire in Iraq and crashed.

The senator said there was support for her effort within the Democratic caucus and she had begun to reach out to Republican colleagues to pitch the idea.

There is at least some appetite among House Republicans to form a commission to study the war. Reps. Elise Stefanik of New York and Rob Wittman of Virginia introduced legislation in August to establish a 9/11-style commission to probe the Afghanistan war.

The calls to study the efforts come after the chaotic withdrawal from Afghanistan, where the Taliban took control of virtually the entire country in a lightening offensive in August, months after Biden announced the withdrawal of all U.S. troops by the end of that month. The U.S. evacuated some 124,000 Americans and allies from Kabul in a massive and dangerous airlift operation in the final weeks, as the Taliban returned to power for the first time since American troops ousted them in 2001.

In hearings this week before the Senate and House Armed Services committees, Pentagon leaders described the outcome of the war in Afghanistan as a “strategic failure,” but they said American troops fought admirably throughout the effort, including in its final days.

Army Gen. Mark Milley, the chairman of the Joint Chiefs of Staff, told members of the House Armed Services Committee on Wednesday that the war had been stalemated at least six years before Biden decided to end U.S. involvement in Afghanistan.

“Strategically, the war is lost — the enemy is in Kabul,” Milley said. “This was a 20-year war and it wasn’t lost in the last 20 days or even 20 months, for that matter. This was the cumulative effect of a series of decisions that go way back.”

Duckworth’s commission would study all of those failures, from al-Qaida leader Osama bin Laden’s 2001 escape from American troops at Tora Bora to the Aug. 26 bombing at Kabul’s airport by Islamic State terrorists that killed 13 U.S. service members.

The commission will “provide a vital and actionable product” for public release to ensure Americans learn from efforts in Afghanistan, the legislation states.

Duckworth said she would not speculate for now about how long the commission might need to examine the war. She said she expected members of the panel would divide up the different aspects of the war to examine individually or as smaller groups.

“I think this is something that when we form the commission, we find the right people to lead it, and we talk with them to see what they think is doable,” Duckworth said. “There’s a vast amount of information that is available … and I would want the person who is leading the commission to have a real say into how they want to structure the work that the commission is going to be doing.”