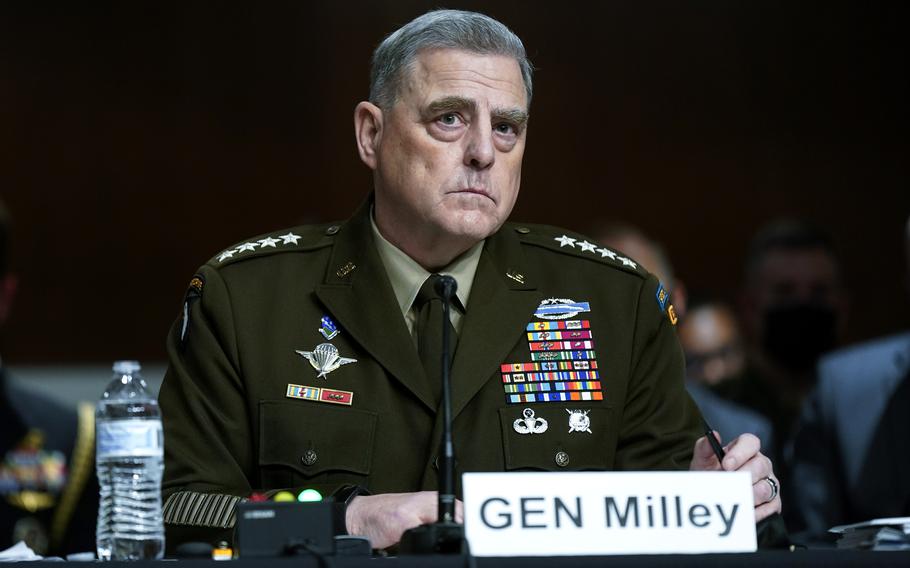 Chairman of the Joint Chiefs of Staff Gen. Mark Milley listens to a Senator’s question during a Senate Armed Services Committee hearing on the conclusion of military operations in Afghanistan and plans for future counterterrorism operations, Tuesday, Sept. 28, 2021, on Capitol Hill in Washington. (Patrick Semansky/AP)

WASHINGTON — Army Gen. Mark Milley and Marine Gen. Frank McKenzie told senators Tuesday that they were against withdrawing all U.S. troops from Afghanistan for fear the country would fall to the Taliban.

The generals said they believed about 2,500 troops should have remained in Afghanistan to prevent the fall of the Afghan government. However, Milley, chairman of the Joint Chiefs of Staff, and McKenzie, the top U.S. general in the Middle East region, declined to tell members of the Senate Armed Services Committee whether they advised President Joe Biden to keep troops in Afghanistan before he made the decision in April to withdraw American forces from the country.

McKenzie, the commander of U.S. Central Command, said it would be “reasonable for the committee to assume” that Biden was informed of the generals’ opinion.

That’s counter to Biden’s claim that no military advisers warned against withdrawing from Afghanistan in an Aug. 18 interview with ABC News.

“No one said that to me that I can recall,” Biden told ABC News when asked whether he was advised to keep 2,500 troops in that country.

“The president of the United States lied to the American people about the advice that you gave him about the military judgment that you provided him,” Hawley said.

Milley said he had been against withdrawing from Afghanistan since last fall when then-President Donald Trump considered ending the war before his term in office expired. Trump on Nov. 11 issued an order to withdraw from Afghanistan “no later than Jan. 15, 2021,” Milley said, but Trump rescinded the order two days later “after further discussions regarding the risks associated with such a withdrawal.”

“My analysis was that an accelerated withdrawal, without meeting specific and necessary conditions, risks losing the substantial gains made in Afghanistan [and] damaging U.S. worldwide credibility,” McKenzie said.

While not admitting to counseling Biden against the withdrawal, Milley said it is the president’s prerogative to decide whether to adhere to military leaders’ advice. When asked why he didn’t resign after his guidance was ignored, Milley said it would have been “an incredible act of political defiance for a commissioned officer to just resign because my advice is not taken."

“This country doesn't want generals figuring out what orders we're going to accept and do or not. That's not our job,” Milley said. “[Civilians] having control of the military is absolute -- it's critical to this republic."

But Defense Secretary Lloyd Austin said Tuesday that keeping U.S. service members in Afghanistan for another year would not have meant peace for the country as President Donald Trump had earlier agreed to withdraw from the country by May 1.

“If you stay there at a force posture of 2,500, certainly you’d be in a fight with the Taliban and you’d have to reinforce yourself,” Austin told senators. “This was not risk-free and the Taliban ... were committed to recommencing their operations against our forces [had we not left].”

Sen. Elizabeth Warren, D-Mass., said the withdrawal was “long overdue” and “was conducted in accordance with the advice of his military advisers who planned and executed every step of this withdrawal”

“One more year of propping up a corrupt government and an army that wouldn't fight on its own was not going to give us a different outcome,” she said.