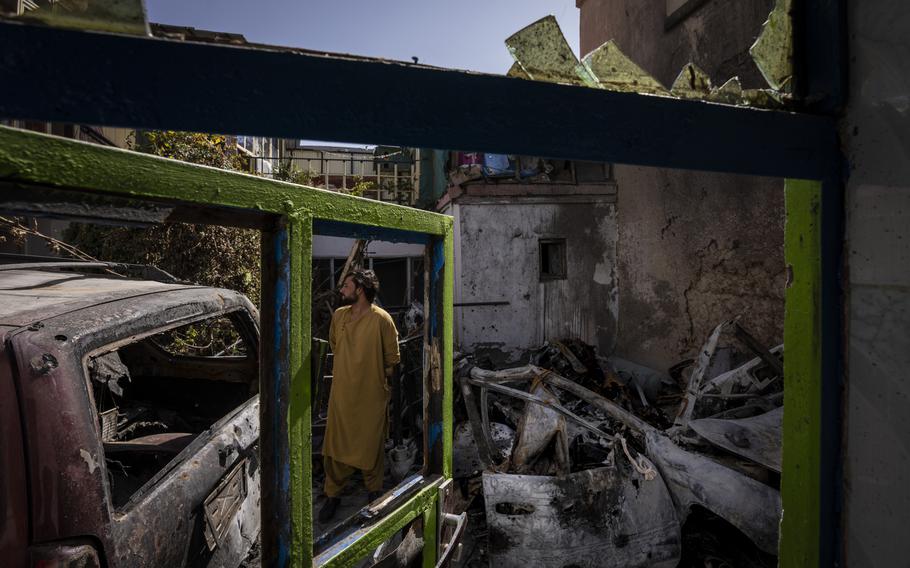 In this Sept. 13, 2021, file photo, an Afghan inspects the damage of Ahmadi family house in Kabul, Afghanistan. A U.S. drone strike killed 10 members of the family, including seven children. On Sept. 18, 2021, they demanded Washington investigate who fired the drone and punish the military personnel responsible for the strike, said Emal Ahmadi, whose 3-year-old daughter Malika was killed Aug. 29 when the U.S. hellfire missile struck his elder brother’s car. (Bernat Armangue/AP)

The review, which is separate from one underway by the Air Force ordered last week by Defense Secretary Lloyd Austin, will determine whether the strike “was conducted in accordance with DOD policies and procedures,” according to the announcement. “Specifically, we will review the pre-strike targeting process, the damage assessment and civilian casualty review and reporting process, and the post-strike reporting of information.”

The strike on Aug. 29 was the last known U.S. airstrike in Afghanistan before the last American troops left Kabul just before midnight Aug. 31. Defense officials originally said it had disrupted an imminent suicide attack against Hamid Karzai International Airport, where 13 U.S. service members were killed in an ISIS attack three days earlier as they helped evacuate Americans and their allies from the country after the Taliban takeover Aug. 15.

Military leaders had earlier claimed the strike killed an Islamic State fighter, but an investigation by U.S. Central Command last week revealed civilians were the only casualties in the attack.

The latest evaluation will be conducted with CENTCOM and U.S. Special Operations Command, but “additional organizations and locations” could be tapped to join as the investigation unfolds, according to the announcement.

“I offer my sincere apology. As the combatant commander, I am fully responsible for this strike in this tragic outcome,” McKenzie said.

The first review of the strike was announced Monday, when chief Pentagon spokesman John Kirby said Austin had ordered a review of the CENTCOM investigation that determined the strike had killed civilians. Lt. Gen. Sami Said, the Air Force inspector general, is leading that review.

Said's investigation will “study the degree to which any policies, procedures, or targeting mechanisms may need to be altered going forward, if any” and “what levels of accountability might be appropriate,” Kirby said.