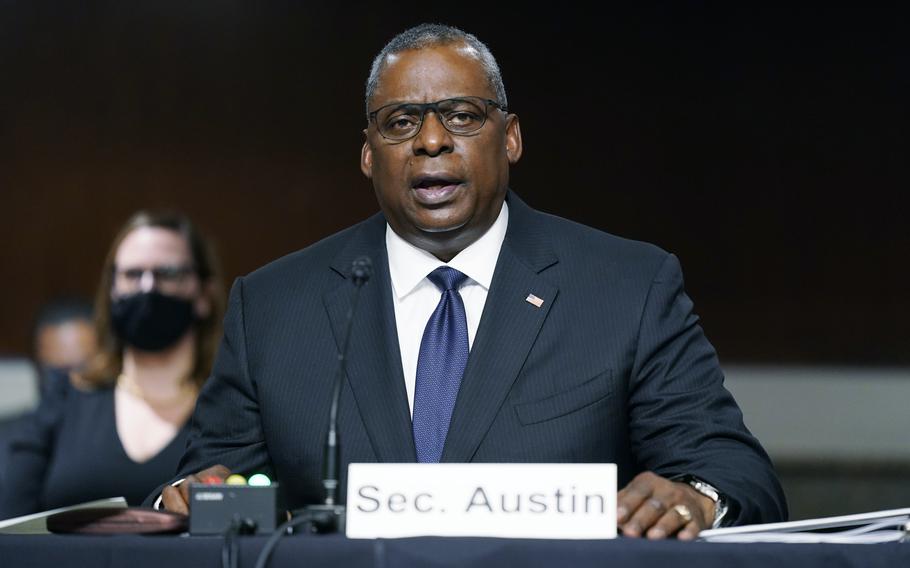 WASHINGTON — The Taliban’s rapid takeover of Afghanistan came as a surprise to defense officials who had spent months planning the evacuation mission from the country, Defense Secretary Lloyd Austin told the Senate Armed Services Committee on Tuesday.

The Pentagon began planning for the possibility of a noncombatant evacuation from Afghanistan “as far back as this spring,” Austin said, though no one predicted the Afghan government would fall before U.S. forces left on Aug. 30.

“The fact that the Afghan army that we and our partners trained simply melted away, in many cases without firing a shot, took us all by surprise and it would be dishonest to claim otherwise,” he said.

The fall of the Afghan government and its military made an already difficult evacuation mission more challenging, Austin said, noting “in the span of just two days — from Aug. 13 to 15 — we went from working alongside a democratically elected, longtime partner government to coordinating warily with a longtime enemy.”

“Noncombatant evacuations remain among the most challenging military operations, even in the best of circumstances. And the circumstances in August were anything but ideal,” he said. “Extreme heat. A land-locked country. No government. A highly dynamic situation on the ground. And an active, credible and lethal terrorist threat.”

However, though the Pentagon “absolutely missed the rapid 11-day collapse of the Afghan military and the collapse of their government,” senior officials knew Kabul would eventually fall to the Taliban, said Army Gen. Mark Milley, chairman of the Joint Chiefs of Staff.

Still, Austin said the forces were ready for the evacuation mission because he had ordered in mid-May that U.S. Central Command, which oversees operations in the Middle East region, prepare for that outcome.

“Two weeks later, I began prepositioning forces in the region, to include three infantry battalions,” he said. “On the 10th of August, we ran another table-top exercise around a noncombatant evacuation scenario. We wanted to be ready. And we were.”

The evacuation mission, which began Aug. 13 — just two days before the Taliban captured Afghanistan’s capital of Kabul — was numerically a success with more than 124,000 Americans and U.S. allies, including Afghans, evacuated from the country before the last U.S. troops left Aug. 30, Austin said.

“It was the largest airlift conducted in U.S. history, and it was executed in just 17 days,” he said. “Was it perfect? Of course not. We moved so many people so quickly out of Kabul that we ran into capacity and screening problems at intermediate staging bases outside of Afghanistan.”

However, congressional lawmakers have criticized its execution, which Austin said in its first days saw “several” desperate Afghans clinging to the sides of military aircraft at the Hamid Karzai International Airport in Kabul and falling to their deaths. In the evacuation’s final days, 13 troops died when Islamic State terrorists detonated an explosive vest and fired into the crowds at the airport’s Abbey gate on Aug. 26.

“To be clear, those first two days were difficult,” Austin said. “We all watched with alarm the images of Afghans rushing the runway and our aircraft. We all remember the scenes of confusion outside the airport.”

Austin admitted the military was unable to evacuate everyone, saying the government is “still working to get Americans out who wish to leave.” When U.S. forces left Afghanistan, between 100-200 Americans who wanted to leave remained in the country, Secretary of State Antony Blinken said at the time.

Sen. Jim Inhofe, R-Okla., said Tuesday that the military at President Joe Biden’s command “did the unthinkable” by leaving Americans behind.

“The American people deserve answers about how this avoidable disaster happened,” he said. “Why were Americans left behind?”

Marine Gen. Frank McKenzie, commander of CENTCOM, said former President Donald Trump’s February 2020 agreement to leave Afghanistan in 2021 contributed to the willingness of Afghan security forces to cede to the Taliban. Trump made the agreement with the Taliban and Afghan government during a meeting in Doha, Qatar.

“The primary accelerant to lowering morale and general efficiency of the Afghan military was what they saw coming on the heels of the Doha agreement — what they believe was forced upon them,” McKenzie said, referring to an assumed Taliban takeover.

Further, the now-ousted Afghan President Ashraf Ghani’s sudden decision on Aug. 15 to abandon Afghanistan as the Taliban closed in on Kabul disheartened the Afghan forces, leading to the Taliban “pushing in as fast as they wanted to go into the center of the city,” the general said.

Though there are no longer U.S. forces on the ground in Afghanistan, Austin said the evacuation part of the mission “is not over” as about 100 Americans and countless vulnerable Afghans remain in the country.

“We did not get out all of our Afghan allies enrolled in the special immigrant visa program. We take that very seriously,” he said. “That is why we are working across the interagency to continue facilitating their departure.”

In the future, Austin said the Pentagon should “consider some uncomfortable truths that we didn’t fully comprehend the depth of corruption and poor leadership in the senior ranks” and the “snowball effect caused by the deals that the Taliban commanders struck with local leaders in the wake of the Doha agreement.”