Top US general says America lost the war in Afghanistan, and more troops would not have changed the outcome 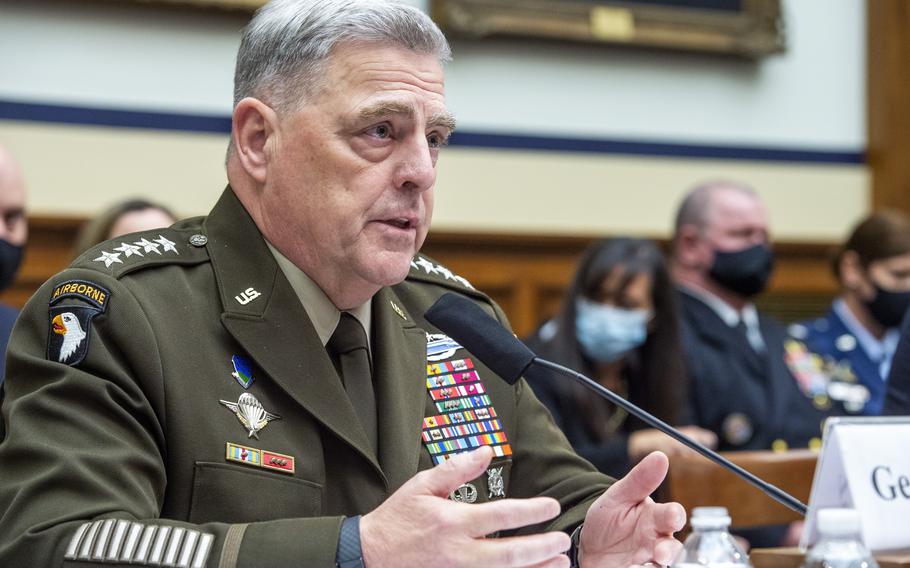 Army Gen. Mark Milley, chairman of the Joint Chiefs of Staff, testifies before the House Armed Services Committee on the conclusion of military operations in Afghanistan and plans for future counterterrorism operations on Wednesday, Sept. 29, 2021, on Capitol Hill in Washington. (Rod Lamkey/AP)

WASHINGTON — The chairman of the Joint Chiefs of Staff on Wednesday admitted the U.S. lost the war in Afghanistan but told House lawmakers that keeping troops in the country would not have led to a different outcome.

Army Gen. Mark Milley called the war a “strategic failure,” but he said it wasn’t because of the individual efforts by U.S. troops — about 6,000 of whom helped evacuate 124,000 people from Afghanistan in the conflict’s final weeks.

“Strategically, the war is lost — the enemy is in Kabul,” Milley told the House Armed Services Committee, referring to the Taliban’s Aug. 15 takeover of Afghanistan’s capital city. “So, you have strategic failure while you simultaneously have an operational and tactical success by the soldiers on the ground.”

The House hearing Wednesday was the second day of public testimony by Milley, Defense Secretary Lloyd Austin and Marine Gen. Frank McKenzie, the top U.S. commander in the Middle East region. All three spoke before the Senate Armed Services Committee on Tuesday and revealed they initially wanted to keep at least 2,500 troops in Afghanistan.

Though Milley originally had been against the decision by former President Donald Trump and President Joe Biden to withdraw all U.S. troops from Afghanistan, he told the House committee that keeping a small military force in the country would not have prevented the Afghan government’s collapse.

“If we held the 2,500, which I stated was my position ... there would have been a clear risk that the Taliban would have begun to attack us after Aug. 31," Milley said, referring to the date Biden set as the withdrawal deadline.

Austin added more time would not have been helpful and explained that extending the war “beyond the end of August would have greatly imperiled our people and our mission.”

“The Taliban made clear that their cooperation would end the first of September, and as you know we faced grave and growing threats from ISIS-K,” he said, referring to the Islamic State group that killed 13 troops in a terrorist attack at the Kabul airport’s Abbey gate on Aug. 26.

Some House lawmakers expressed frustration over how the final month of the war played out. Images of chaos at the airport with desperate Afghans clinging to the sides of military aircraft and falling to their deaths and Americans and allies turned away from Taliban checkpoints in the city flooded the airwaves and social media during the 17-day evacuation mission at Hamid Karzai International Airport.

“I think we can all agree that the withdrawal was an unmitigated disaster,” said Rep. Mike Rogers, R-Ala. “Hundreds of Americans were left behind, thousands of Afghan allies stuck with little hope of escape, potentially billions [of dollars] worth of U.S.-provided military equipment now in the hands of the Taliban [and] thousands of al-Qaida and ISIS terrorists freed from prisons.”

Though U.S. and coalition forces evacuated about 124,000 people from Afghanistan in the final weeks of the withdrawal, some House lawmakers argued more should have been done to help Afghan allies and about 100 Americans left behind in the country.

“In briefings and hearing since April, we've demanded to know a plan to safely evacuate Americans and Afghans … The response from the administration was, ‘We're working on it,’” said Rogers, who is the committee’s ranking Republican. “Now it's clear they never had a plan.”

Austin said evacuation efforts continue without troops in Afghanistan. In the past 48 hours, the U.S. has helped get 63 Americans and 189 legal permanent residents out of the country, he said.

Still, Rep. Matt Gaetz, R-Fla., called for Austin and Milley to resign at the hearing.

“I believe you guys probably won't resign -- you seem to be very happy failing up over there,” he said. “But if we didn't have a president who was so addled, you all would be fired because that is what you deserve. You have let down the people who wear the uniform."

Milley said the war was lost long before he and Austin took the top jobs at the Defense Department, adding he knew it was a stalemate about six years ago.

“This was a 20-year war and it wasn’t lost in the last 20 days or even 20 months, for that matter,” the general said. “This was the cumulative effect of a series of decisions that go way back.”

Milley rattled off several failures that he said lost the war, including Osama bin Laden’s 2001 escape from U.S. forces at Tora Bora, the U.S. not effectively dealing with Pakistan as a sanctuary for terrorists, and removing U.S. advisers from Afghan forces.

The last decision “essentially blinded…our ability to see the will, the morale, the leadership and training” of Afghan forces, he said.

“We accomplished our strategic task of protecting America against al-Qaida, [but] certainly the end state is a whole lot different than what we wanted,” Milley said.

With the Taliban in control of Afghanistan, Austin cautioned that al-Qaida, the terrorist organization that planned the 9/11 attacks from the country, could see a resurgence there.

“Al-Qaida has been degraded over time,” he said. “Now, terrorist organizations seek ungoverned spaces so that they can train and equip and thrive and so there is clearly a possibility that that can happen [in Afghanistan] going forward."

The U.S. loss also served as a “morale boost” for the Taliban, Milley said.

"It likely put a shot of adrenaline into their arm,” he said. “Their grandfathers defeated the Soviet Union in the war in Afghanistan many, many years ago and they are … declaring [the U.S. war] a major victory."