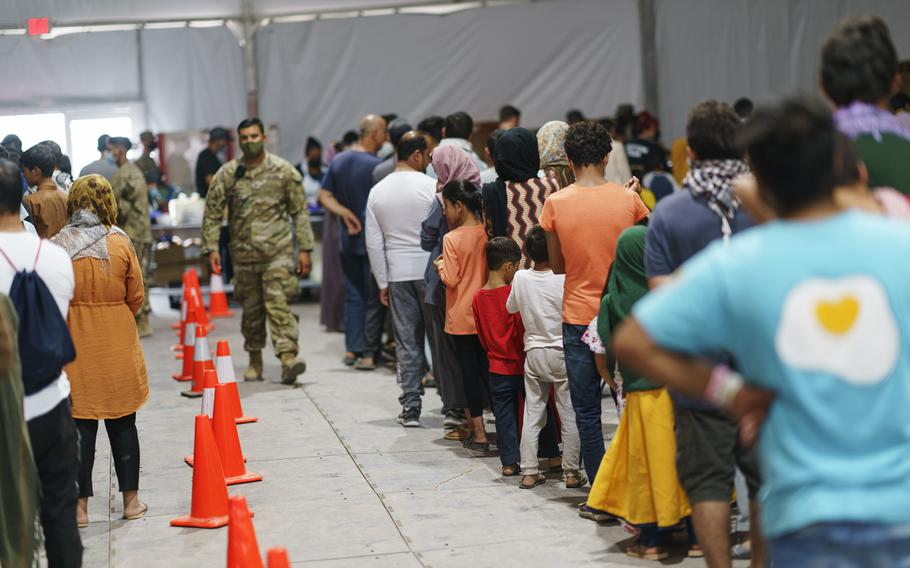 Afghan refugees line up for food in a dining hall at Fort Bliss’ Doña Ana Village, in New Mexico, where they are being housed, Friday, Sept. 10, 2021. (David Goldman/AP)

The military has been housing Afghan evacuees at eight installations in the U.S. since late July when evacuations began in the final weeks of the U.S. involvement in Afghanistan. As of Thursday, the bases have a capacity of 64,000, said Air Force Gen. Glen VanHerck, the top commander for U.S. forces in North America.

An additional 14,000 evacuees at overseas staging bases are still awaiting flights to the U.S. after they were halted in early September due to a measles outbreak. But with space for just 11,000 more at stateside installations, VanHerck said more evacuees need to be processed through the system and resettled so more can be moved into the eight bases in the United States.

“When you do the math, you'll see that we're relying on the output to ensure that we have enough capacity for the additional remaining Afghans coming this way,” the general said.

VanHerck could not give an end date to the evacuee housing mission, dubbed Operation Allies Welcome, but he said the military would continue to provide shelter and food for evacuees as long as it's necessary.

After the measles outbreak, the military vaccinated all evacuees against that disease. Medical workers are also working to vaccinate the Afghans against influenza and the coronavirus.

“The [coronavirus] positivity rate is 0.4% — less than 1% — and so we haven't had significant challenges,” VanHerck said. “I will tell you that the task force’s concern is primarily flu outbreak at this point and we're working hard to get the flu vaccine, as well, across all of the Afghans.”

VanHerck said about 83% of Afghan evacuees have been immunized against the coronavirus to date, compared to just 55% of the American public as of Tuesday, according to the latest Centers for Disease Control and Prevention data.

It was the general’s first time briefing reporters on the mission since a grand jury indicted two Afghan evacuees at Fort McCoy, Wis. with drug charges and a female service member reported “a small group of male evacuees” assaulted her last week at Fort Bliss, Texas.

While VanHerck acknowledge the allegations, he said Afghan evacuees have committed significantly less crime than the U.S. population over the same time period.

“For example, in six weeks in Operation Allies Welcome in a population of 53,000, there have been eight reported cases of robbery and theft,” VanHerck said. “An average six-week period in a similar place is in excess of 150.”

The general also said there are more than 600 security and law enforcement personnel working at each of the installations serving evacuees.

“That is about three to four times the average of most cities around the globe, if you will, and so we're taking this very seriously,” VanHerck said. “We take every accusation or incident to heart and take action right away.”