Desperate to save their families, Afghans turn to members of Congress for urgent help 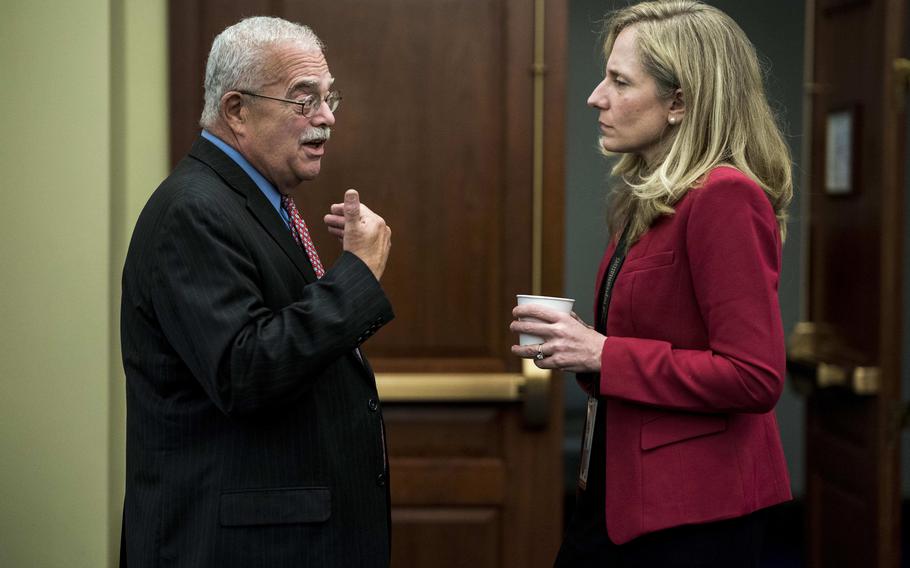 Rep. Gerald Connolly, D-Va., and then-Rep.-elect Abigail Spanberger, D-Va., in 2018. Connolly is working with a nonprofit based in his district, No One Left Behind, forwarding hundreds of cases to the State Department in hopes of bringing stranded Afghans and Americans’ dire circumstances more directly to the attention of authorities. (Melina Mara/The Washington Post)

WASHINGTON — From his home in Prince William County, Va., he could hear the chaos through the phone as his wife approached the airport in Kabul. He heard gunfire, and screaming, and his wife’s voice on the other end of the line asking him with incredulity, “How can I get to the gate?”

She was a woman traveling alone in an overwhelmingly male crowd just feet away from the Taliban. She didn’t have a hijab covering her. She had just an email from the State Department telling her to be here.

“I said, ‘This is the one and only way you can save your life,’ “ her husband, Ahmad, an Afghan American who served the U.S. military in Afghanistan as a legal adviser and linguist for six years, recalled in an interview with The Washington Post, speaking on condition of anonymity because of concern for his family’s safety.

She made it to the gate. But U.S. authorities turned her away, for lack of sufficient documentation.

Despondent, Ahmad didn’t know what else to do. So he knocked on what he said was the only door still open to him: that of his congressman, Rep. Rob Wittman, R-Va.

Since the fall of Afghanistan to the Taliban last week, Wittman’s office and many others in Congress have stepped in to assist desperate constituents with family members stranded in Kabul during the chaotic evacuation mission with a closing window. Members of Congress in Virginia — where large populations of Afghans or Afghan Americans live — have been especially involved, as staff members frantically try to facilitate Special Immigrant Visa (SIV) applications.

In addition to dozens of families of U.S. citizens and Afghans, Rep. Abigail Spanberger, D-Va., said her office is fielding call after call from Afghanistan veterans trying to personally ensure that the interpreters they served with could be evacuated to safety. Rep. Gerald Connolly, D-Va., is working with a nonprofit based in his district, No One Left Behind, forwarding hundreds of cases to the State Department in hopes of bringing stranded Afghans and Americans’ dire circumstances more directly to the attention of authorities.

“My office is in touch with a number of U.S. citizens and SIV-eligible Afghans who are desperately trying to get to safety,” Sen. Mark Warner, D-Va., said in a statement. “We are communicating closely with staff from State Department and Department of Defense to get as many of them out of Afghanistan as safely and as quickly as possible, knowing that time is of the essence here.”

For some like Ahmad, help from Congress can feel like the last hope to save their families after months of failed communications with the State Department or other U.S. agencies they had been relying on as the Taliban gained ground.

And on Tuesday, as Ahmad’s wife waited for hours outside the gate, Wittman’s staff did what they could.

“RE: URGENT WIFE OF US CITIZEN TURNED AWAY AT AIRPORT, AFTER RECEIVING EMAIL FROM STATE TO COME TO AIRPORT,” read the subject line of an email his staff sent to the State Department that was provided to The Post.

“There is tear gas and fires everywhere,” the staffer wrote, pleading for someone to help her get inside to safety and, ultimately, on a plane.

Ahmad said his wife stayed in hiding outside the airport for hours, until finally, pleas from the congressman’s office paid off: His wife was instructed to go to a different gate.

To get there, she had to pass through a Taliban checkpoint. There, Ahmad said, his wife called him in tears. The Taliban pointed a gun at her and told her to go home, saying she had violated Islam — fleeing to America, without a man accompanying her, without a hijab. But she didn’t go home, Ahmad said. Instead, she found a different route to the gate — and by the next morning, she was on a plane to Qatar.

Ahmad slept for the first time in more than a day. Wittman was relieved — but remembered the dozens of other unresolved cases his office, and so many others, was still working on.

“You see the dire situation: having the wherewithal to go to the gate knowing the risk they suffer, and waiting for something to happen,” Wittman said. “Luckily we were able to constantly stay in touch with the State Department throughout the day [in Ahmad’s wife’s case]. But there are hundreds that unfortunately aren’t in that situation and able to get out.”

Among them are the rest of Ahmad’s family.

After a few hours of sleep, Ahmad woke up to a phone call from his brother in Afghanistan. The Taliban, his brother told him, had come to their home and threatened to kill them.

They were looking for Ahmad’s wife.

During a House Foreign Affairs hearing in May, Connolly told U.S. special envoy to Afghanistan Zalmay Khalilzad that the withdrawal from Afghanistan was starting to bear an “eerie resemblance” to the end of the war in Vietnam.

“It seems the American game is to cut our losses and leave, and hope for the best — but, not our problem.” Connolly said. “The problem is, because of this engagement, just like Vietnam, we’re leaving behind hundreds of thousands of Afghans who relied on us, trusted us, for their security.”

Now, Connolly said in an interview this week, “my fears have been confirmed.”

The evacuation mission has devolved into chaos, with Afghans receiving confusing guidance from U.S. authorities about how to get to the airport, while many of their families, like Ahmad’s, are receiving death threats from the Taliban.

President Joe Biden said Friday that so far the United States had evacuated 13,000 people since Aug. 14 and was committed to evacuating every American citizen and allied Afghan. But thousands remain, many with harrowing journeys ahead of them to get to the airport and past the Taliban — and many traveling without paperwork.

Since Saturday, Connolly’s office has submitted the names and information of nearly 2,000 people to the State Department — Special Immigrant Visa-eligible Afghans, refugees, stranded U.S. citizens. Connolly said he has also tried to urge the department “not to take a strict, stringent, rigid approach to documentation. A lot of these people fled with nothing.”

When he heard back on Tuesday morning about one of those people getting approved for a flight, Connolly said, “I wanted to cry.”

“I’ll never be satisfied until every single person whose name I submit is confirmed and they’re on an airplane,” he said.

One still waiting is Dellawar Khan.

Khan had been trying for years to obtain a Special Immigrant Visa but had been denied. Keith Saddler, vice chairman at No One Left Behind — which has been advocating for Khan and hundreds like him — said Khan had serious difficulty obtaining a letter from his former employer, KBR, verifying his employment.

Khan, a father of nine, worked for the American defense contractor as an interpreter at Forward Operating Base Salerno in the mid-2000s. He said in a letter that his last day of work was in 2008: While he was on his way to the base he got a phone call from his uncle. His father and his brother had been shot by the Taliban — targeted because of Khan’s work with the Americans. Neither survived.

Saddler got an email from Khan telling his story in 2020, “and it just tore my heart out,” he said. He tried to do everything to help Khan get his visa — including calling Connolly. After multiple letters from the congressman on Khan’s behalf, KBR ultimately provided Khan a letter verifying his employment. But not one that helped him get a Special Immigrant Visa.

The company disclosed that its records indicated Kahn was terminated in November 2007 because of an unspecified “military ban” and had no other information about why. There was a separate “Delawar Khan Salab” who resigned in February 2008 due to being “threatened by Taliban,” a letter KBR sent to Khan said. Saddler said it had to be a mistake.

In a statement, Philip Ivy, KBR’s vice president of global marketing and communications, said KBR had been working to help former employees obtain SIVs; in Khan’s case, he said, “We can only provide what our records from over 10 years ago reflect, and urge the State and Defense Departments to work together to evaluate what happened. We feel for Mr. Khan and the difficulty the record might cause his SIV application, but we do not have discretion to withhold information in our records.”

Saddler told Khan to go to the airport on Thursday anyway.

He made it past the Taliban — “lied through his teeth” — but it didn’t matter, Saddler said. It was the Americans who turned Khan away. Not enough documentation.

“I’m watching our political leaders saying, ‘We’re going to get everybody out’ — well, they denied him,” Saddler said. “So he called me. I said, ‘Jesus, I don’t know what to do.’

The next day, Saddler said, Khan had a letter from the congressman himself — seeking to assure U.S. authorities that he was confident Khan would soon be approved for a Special Immigrant Visa. “So has Congressman Connolly been helpful? I can’t think of anyone who could have been any more helpful than this guy was,” Saddler said. “I mean, this is what you want a congressman to do.”

Khan is now carrying Connolly’s plea back to the airport, Saddler said, hoping it will be enough to get on a plane. They are praying and crossing their fingers. “That’s all we can do at this point,” Saddler said.

He has not heard from him in more than a day.

Wittman’s office is still trying to help the rest of Ahmad’s stranded family members — his father, his brother and his brother’s wife and their three children — but the challenge now is locating them.

Since Ahmad’s brother called to tell him the Taliban came to threaten his family, he has not been able to reach him again.

He called his family’s neighbors. They said they could see his family’s gate was open, and a pair of baby shoes was lying on the ground. His baby niece’s shoes, Ahmad knew.

What it meant has swirled around in his mind all day and night. He couldn’t eat and couldn’t sleep. Were they escaping? Were they abducted?

He was worried, too, about other extended family across Afghanistan, like two older nieces who were university students now in hiding from the Taliban, fearing forced marriage.

“I don’t know what my family’s situation is,” Ahmad said, but he knew one thing: “All of this happened because we served the American government.”

He spent years feeling proud of his service, he said. But now regret has seeped in.