‘We put ourselves in their shoes’: Ramstein airmen step up to help first wave of Afghanistan evacuees

by
Karin Zeitvogel and Jennifer Svan
• Stars and Stripes • August 20, 2021 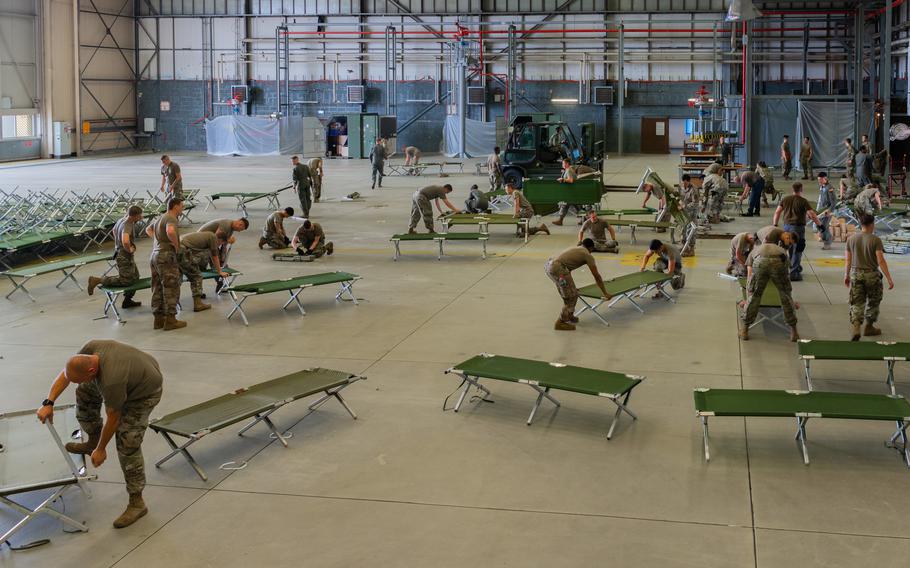 Airmen set up cots at a hangar on Ramstein Air Base, Germany, Aug. 19, 2021. Ramstein Air Base is providing lodging for evacuees from Afghanistan as part of Operation Allies Refuge during the next several weeks. (Edgar Grimaldo/U.S. Air Force)

KAISERSLAUTERN, Germany — Rows of military cots were set up in a hangar at Ramstein Air Base, as airmen and volunteers sorted toiletries, baby items, toys and clothing into boxes in a nearby building ahead of the arrival of hundreds of evacuees from Afghanistan Friday.

“We put ourselves in their shoes — if we had to escape some terrible force and we left all of our things behind, what would we need when we got to a safe place?” Andrew Wilder, an Air Force first sergeant, said as he and half a dozen volunteers organized carloads of goods donated by members of the Kaiserslautern military community, hours before three planes carrying the first wave of evacuees landed at around 7 p.m. Friday.

Nearly 400 people, including many Afghan families with children, were on the first flights to arrive at Ramstein. Days earlier, after the swift Taliban takeover of Afghanistan, they had been airlifted from the chaos of Hamid Karzai International Airport to Qatar, and on Friday were transported to the sprawling U.S. base in southwest Germany.

Ramstein has the capacity to support up to 5,000 evacuees, and more aircraft are expected in the coming days, base officials said. 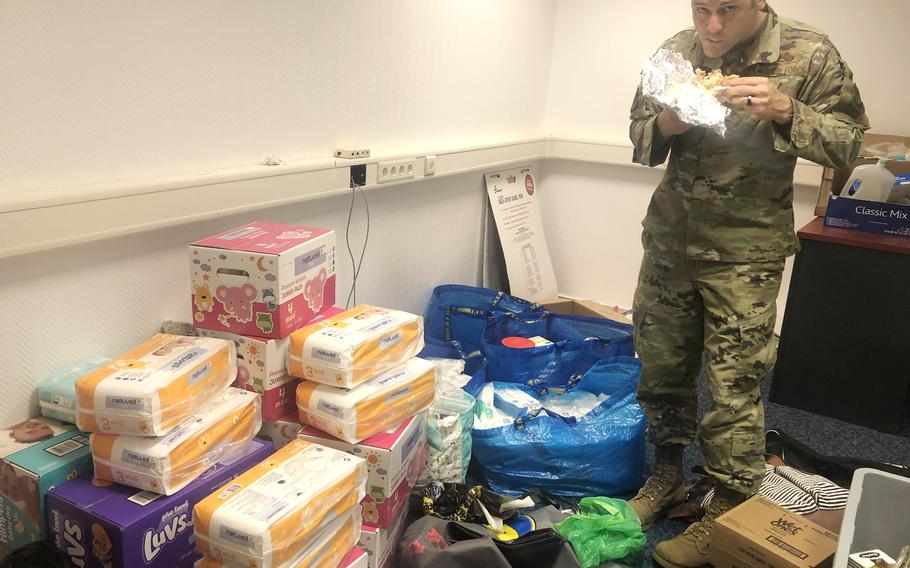 Buy Photo
Andrew Wilder, an Air Force first sergeant, grabs a late night bite to eat in a room filled with donated toiletries and baby items at Ramstein Air Base in Germany, Aug. 19, 2021. The donations were gathered in the space of a few hours for evacuees who might arrive at the base from Afghanistan. (Karin Zeitvogel/Stars and Stripes)

They will remain on the base “temporarily while in transit to more permanent resettlement locations,” the U.S. Embassy in Berlin said in a statement. It was not clear if they would be resettled in Germany or another country.

Ramstein airmen had collected a roomful of clothing and other items for the evacuees in just a few hours Thursday after an appeal for donations was posted on a Facebook page used by thousands of members of the military community.

But Wilder said they were in need of more diapers and infant formula – and soccer balls for the children.

In total, around 7,000 people have been evacuated on U.S. military flights out of Kabul since Saturday, Army Maj. Gen. Hank Taylor, the Joint Staff’s deputy director for regional operations, said Thursday.

The U.S.’s goal was to evacuate “as many as we can, as fast as we can,” Pentagon spokesman John Kirby told reporters the same afternoon.

Thousands of American citizens were among those still waiting to be airlifted out of Afghanistan Friday, but most seeking to be evacuated are Afghans, including interpreters and journalists who worked with Americans in the 20 years that they were in the country.

Images of the airlift operation have shown a U.S. Air Force C-17 carrying 823 people — the most ever carried in the massive military cargo plane — and of Afghans falling to their deaths after clinging to the sides of another C-17 as it took off from Kabul. 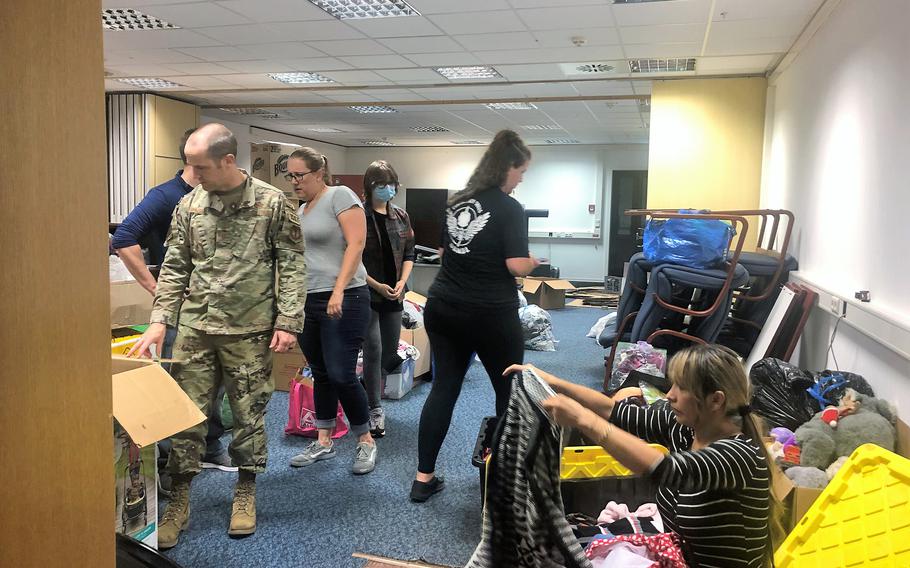 Buy Photo
Andrew Wilder, an Air Force first sergeant, front left, and half a dozen volunteers from the Kaiserslautern military community sort through donated goods at Ramstein Air Base, Germany, Aug. 19, 2021. The donations were collected for evacuees from Afghanistan, who were expected to arrive at the base. (Karin Zeitvogel/Stars and Stripes)

But the mother of one airman flying a C-17 transporter in and out of Kabul said one image captured the Air Force’s mission — the picture of an Afghan child sleeping on the floor of a C-17, cloaked in an airman’s jacket for warmth.

That image “pulls at our heartstrings” and underlines the “sense of duty, sense of purpose that airmen feel, doing what we can to help people who need help, no matter who they are,” Wilder said.

“Helping the folks who have helped us, in any way we can, regardless of whether we served in Afghanistan or not, means something to all of us,” he said.