Pentagon: Taliban stopping some Americans and credentialed Afghans from passing through checkpoints to Kabul airport 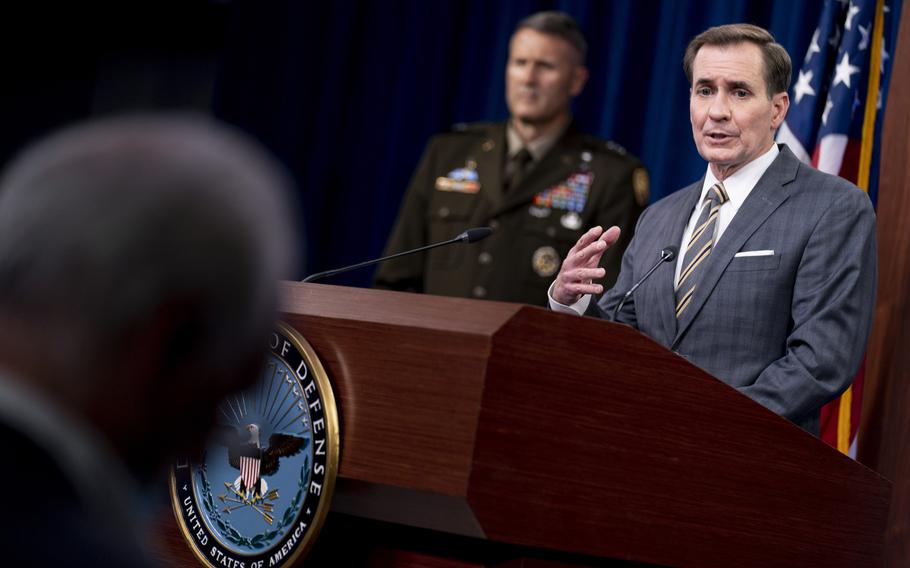 U.S. military officials have heard "sporadic reports” that some Americans have not been able to pass through Taliban checkpoints to get the Kabul airport to leave Afghanistan despite promises from the group to allow passage to U.S citizens, chief Pentagon spokesman John Kirby said Friday.

However, Kirby told reporters at the Pentagon that overall “what we've been seeing is that Americans are able to get through those checkpoints and are able to get onto the airfield.”

“There have been multiple cases of Afghans — even some credentialed Afghans — being assaulted and being harassed, no question,” Kirby said. “But by and large, those Afghans who have the proper credentials — and we have made it clear to the Taliban what they look like — are getting through the checkpoints.”

However, news reports and social media posts have showed Taliban fighters harassing, and in some cases assaulting, Afghans attempting to get to the airport. Reports also described crowded, often chaotic scenes just outside the airport gates, where thousands have flocked trying to flee the country in fear of a return to the Islamist rule of the Taliban that the group enforced from 1996 to 2001.

The chaos outside the gates forced U.S. troops to leave the Kabul airport on Thursday to gather U.S. citizens trapped in the large, unruly crowds just outside the airfield’s walls. It was the first known time that American troops had moved outside the perimeter of the airport since the Taliban captured the city Sunday.

Kirby said troops escorted 169 Americans into the airpor,t and it was the first time that U.S. forces at the airport had the capacity to walk into those crowds. C-17s landing Friday in Kabul carried hundreds of additional troops, bringing the total at the airport to 5,800.

“They were really just outside the wall [of the airport]. It wasn't very far to go,” Kirby said. “It was in a relatively short period of time, and it wasn't a rescue so much as assisting them getting onto the field.”

After the military published photos of a Marine pulling an infant over the wall of the airport on Friday, social media reports claimed the U.S. was pulling children into the facility to evacuate them from the country. However, Kirby explained the act was not an evacuation, but “a very humane act of compassion by the Marines.”

“The parent asked the Marines to look after the baby because the baby was ill,” he said. “And so, the Marine you see reaching over the wall took it to a Norwegian hospital that's at the airport. They treated the child and returned the child to the child's father.”

At this point, the Pentagon has not committed to going farther outside the airport to help evacuees get into and through Kabul to the airport, Kirby said.

“I'm not going to talk about potential future operations in one way or the other, and every decision that is made has got to be weighed against the risks and benefits of what you're doing,” Kirby said.

Though no decisions about more troops leaving the airport to gather Americans in Kabul have been made, Army Maj. Gen. Hank Taylor, the Joint Staff’s deputy director for regional operations, said Friday that they are always planning for possible operations.

Inside the airport, where hordes of evacuees have swarmed to get on planes to leave Afghanistan, the U.S. military is flying thousands of Americans and Afghans out of the country on C-17 cargo jets each day.

The military has flown 6,000 people, including a "couple hundred Americans," out of the country in the past 24 hours despite a pause in flight operations after the U.S. military hub at Al Udeid Air Base in Qatar reached its capacity for accepting evacuees, Taylor said.

“[The pause] lasted about six to seven hours and it was allowed to ensure that flights at our intermediate staging bases could receive more personnel and that has been cleaned up,” he said. “As flights have departed there, it has allowed us now to continue with those that are ready to fly from Kabul to leave.”

On Friday, hundreds of evacuees from Afghanistan, including many families with children, arrived at Ramstein Air Base in Germany.

Kirby said three military bases in the U.S. are now set to receive Afghan refugees — Fort McCoy in Wisconsin, Fort Bliss in Texas and Fort Lee in Virginia, which was the first to receive groups of special immigrant visa holders last month.