by
Corey Dickstein and Caitlin Doornbos
• Stars and Stripes • May 28, 2021 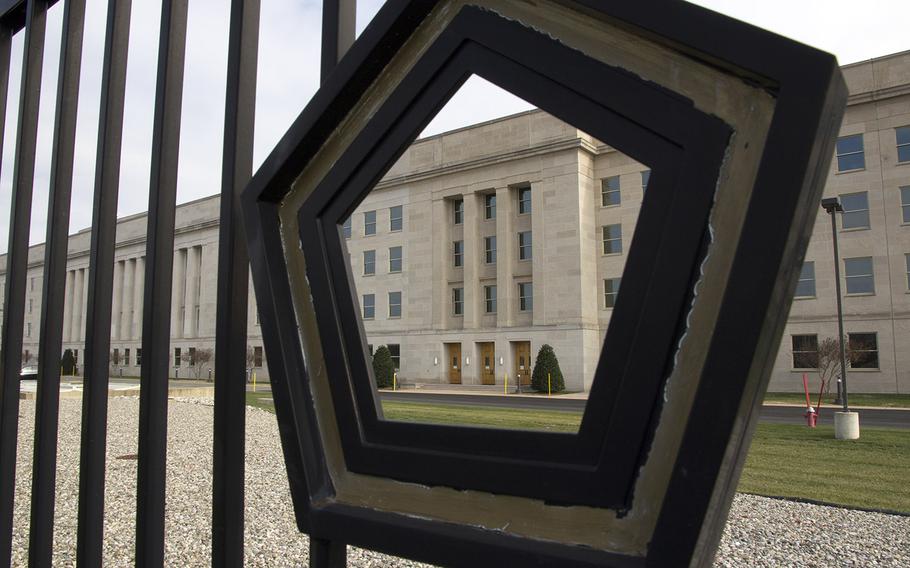 Buy Photo
The Pentagon is shown in this undated file photo. (Stars and Stripes)

The Pentagon on Friday unveiled a $715 billion budget request for fiscal year 2022, asking Congress for the Defense Department’s largest-ever investment in developing next-generation weaponry that top defense officials cite as necessary to maintain military advantages over China and Russia.

President Joe Biden’s first Pentagon budget request places an emphasis on the future battlefield, with the Defense Department primarily focused on China, which seeks military parity with the United States in the coming years, said Army Gen. Mark Milley, the chairman of the Joint Chiefs of Staff. The 2022 budget request represents an essentially flat budget, seeking an increase in funds of 1.6% more than the 2021 Pentagon budget, moving some money used for current readiness in recent years to prepare for a future fight.

“It strikes an appropriate balance between preserving present readiness and future modernization, but it is biased toward the future operating environment and readiness,” Milley told House lawmakers during a hearing Thursday. “We are trying right now to put down payments on investments that are going to pay huge dividends 5, 10, 15 years from now for a future force that will be able to compete successfully with any adversary out there, to include China.”

The 2022 budget request asks for more than $112 billion for research, development, testing and evaluation, an about 5% boost over the Pentagon’s 2021 RDT&E budget, which had been its largest-ever in that portfolio focused on future weaponry. That money will be spent largely on the development and procurement of hypersonic missiles, artificial intelligence and autonomous capabilities, microelectronics, and space and cyber technology, which Milley and Defense Secretary Lloyd Austin labeled critical to future combat operations.

The budget proposal would also provide U.S. troops and Defense Department civilian workers a 2.7% pay raise, earmark $617 million toward hardening military installations against the impacts of climate change, spend some $500 million on coronavirus pandemic-related efforts, and set aside $30.7 million to identify and address extremism in the ranks.

The request is smaller than the initial estimated Pentagon budget request for 2022 drafted during former President Donald Trump’s administration, which would have sought about $722 billion, matching calls from Republicans for at least 3-5% yearly growth in Defense Department funding. Liberal lawmakers, meanwhile, have called on Biden to slash Pentagon funding to pay for domestic programs, setting up a possible funding showdown as Congress drafts its version of the Pentagon’s next budget.

The top Republicans on the Senate and House Armed Services Committees blasted Biden’s proposal as “wholly inadequate,” vowing they would fight to boost the Pentagon’s topline for 2022.

“It’s nowhere near enough to give our service members the resources, equipment and training they need,” Sen. Jim Inhofe, R-Okla., and Rep. Mike Rogers, R-Ala., wrote in a joint statement. “A budget like this sends China and our other potential adversaries a bad signal — that we’re not willing to do what it takes to defend ourselves and our allies and partners.”

Meanwhile, Rep. Anthony Brown, D-Md., a member of the House Armed Services Committee and an Army veteran, defended Biden’s budget request as “clear-eyed about the challenges facing our country” and striking a good balance between Pentagon and domestic spending.

Austin told lawmakers on Thursday that the budget released Friday “funds the right mix of capabilities” to ensure current operations around the world and prepare for potential conflict with a near-peer or peer power in the coming years.

Austin said the Biden administration’s first budget is reflective of the current world for the U.S. military – in which fewer troops are serving in longstanding combat operations in places such as Afghanistan and Iraq. To that end, Austin proposed ending the use of the Defense Department’s long-held wartime coffers, known as Overseas Contingency Operations funds. The 2021 budget proposal would roll those funds, such as about $69 billion in OCO funding for 2021, into the base budget request for the first time since 2002.

The change comes after Biden in April directed the full withdrawal of troops from Afghanistan by Sept. 11, a process military officials said this week was already about 25% completed. Only a few thousand troops remain on the ground in Iraq and Syria, where they primarily serve to train local forces fighting the remnants of the Islamic State.

Lawmakers for years have criticized OCO money as a “slush fund” for Pentagon officials to skirt mandatory budget caps imposed by Congress in the last decade. Those caps have since expired, giving Austin even more leeway to make the change that he called “long overdue.”

Among the initiatives once paid for with OCO funds, the Pentagon proposed more than doubling its new Pacific Deterrence Initiative to $5.1 billion in 2022. The PDI, which began in 2021 when Congress approved $2.2 billion, is meant to directly check Chinese aggression in the Indo-Pacific region by working and training with allies and forward deploying troops and weapons. It is modeled off the Pentagon’s efforts to thwart Russian aggression in Eastern Europe, known as the European Deterrence Initiative, which began in 2014.

As the U.S. military moves further away from active combat operations toward working to deter the potential for high-level conflict, Austin’s budget calls for some older weapons programs to be retired and for a modest reduction in total troop strength.

Among those labeled for partial cuts totaling about a $2.8 billion savings, according to the Pentagon, are the Air Force’s A-10 attack jet and the Navy’s littoral combat ship. The budget proposes cutting 42 A-10s and four LCSs, all of which had yet to reach the Navy’s fleet.

The budget would fund a total force of 2,145,900 troops across all the services, including the National Guard and reservists, a cut of about 5,300 troops. The largest cuts would come from Navy and Marine Corps, which would lose 2,200 and 2,700 active-duty troops, respectively. The budget also calls for 1,000 fewer active-duty soldiers and a cut of 800 active-duty airmen. The Space Force would grow by about 2,000 guardians.

In addition, it would boost spending on Pentagon efforts to modernize its missile defense capabilities and nuclear weapons by about $1.7 billion over 2021 levels, including funding programs to upgrade all three legs of the nuclear triad — the future nuclear bomber, the B-21 Raider; the future Columbia-class submarine, and the Ground Based Strategic Deterrent, the proposed replacement for the U.S. Cold War-era Minuteman III intercontinental ballistic missiles.

The RDT&E funding would include $2.3 billion “for various microelectronics efforts crucial to long-term national security,” $3.8 billion for hypersonics, $874 million for artificial intelligence and $398 million for 5G wireless networks. The budget proposal also includes $10.4 billion for the cyberspace activities and $20.6 billion for space and space-based systems.

On Thursday, Milley labeled the RDT&E especially crucial to ensure China cannot close the existing capabilities gap the United States has long held over other world powers. China — and Russia — is not yet on par with U.S. military capabilities, the general said, but it has invested heavily toward improving its capabilities in recent years.

“They are not our peer or our near-peer just yet, but they are rapidly growing and their objective is by probably the mid-2030s, for sure by the mid-century, to be equal to or greater than the United States military,” Milley said of China. “They are advancing rapidly in space, cyber, and in maritime — both surface and subsurface — and air, so they are very, very significant competitor to the United States, but they are not yet our equal, but their intent is to be our equal.”

“If we do not put a lot of money towards those [new technologies] and developing them to a level of capability to deploy in our force that will be at a significant disadvantage to those countries that do develop them,” he said. “China is investing heavily in all of those capabilities, and we need to definitely do that. This budget does a lot of that and it will have to be a sustained level of effort over many years, but it's critical to the defense of the United States that we invest in advanced technologies.”