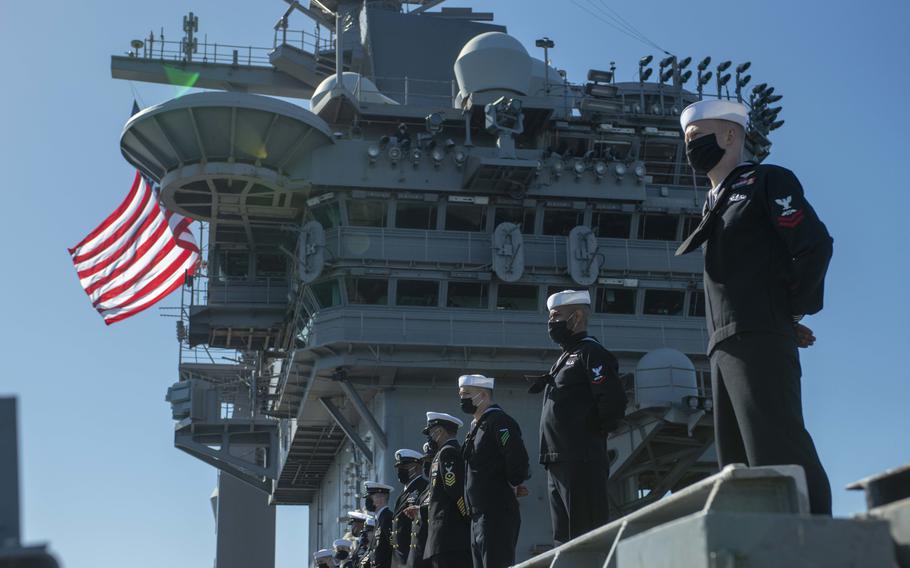 Sailors man the rails on the flight deck of the aircraft carrier USS Nimitz on Feb. 26, 2021. (Alison Hummel/U.S. Navy)

WASHINGTON — The Navy will not reach 300 ships for another year despite continued pressure for a bigger fleet as service officials make advanced capabilities such as unmanned vessels and hypersonic weapons a priority to remain competitive with China, according to its proposed budget for fiscal year 2022.

The Navy does plan to procure eight new warships in 2022, though overall shipbuilding funds will drop by 3% from last year to $22.6 billion. Still, the service will add two ships to its total from the 2021 budget, bringing the fleet size to 296 — the same size it was under the fiscal year 2020 budget.

“Eight ships a year is not going to get to a 355-ship Navy,” Rear Adm. John Gumbleton, deputy assistant secretary of the Navy for budget, told reporters at the Pentagon on Friday. “That said, we’re consistent with last year’s request of eight ships.”

Though the shipbuilding budget fell, the service’s overall budget of nearly $163.9 billion would increase $965 million from 2021.

With a request of more than $22.6 billion for research, testing, development and evaluation — up 12.4% from last year — the Navy’s budget follows the theme of the Pentagon’s overall budget strategy, calling for increased focus on innovation and investing in next-generation weapons development.

One key area of research and development investment is in unmanned vessels, with $375.6 million wanted for unmanned surface vessels and $290.6 million for unmanned undersea vehicles. In the air, the unmanned carrier-launched airborne surveillance and strike program is funded at $268.8 million.

The move to prioritize other areas above building the fleet comes as China has “rapidly grown its navy from 262 to 350 ships” and prepares to launch its third aircraft carrier in 2023, the Navy said.

The proposal diverts from a January shipbuilding plan by former President Donald Trump’s administration, which called for a 4.1% budget increase to reach 355 ships within a decade. Congress in its 2018 National Defense Authorization Act required the Navy to achieve a 355-ship fleet “as soon as practicable.”

“It’s all about not having a hollow force, making sure we’re ready today, modernizing for tomorrow and then the investment for the future,” Gumbleton said. “And with this topline allocated, this is the right blend to do that.”