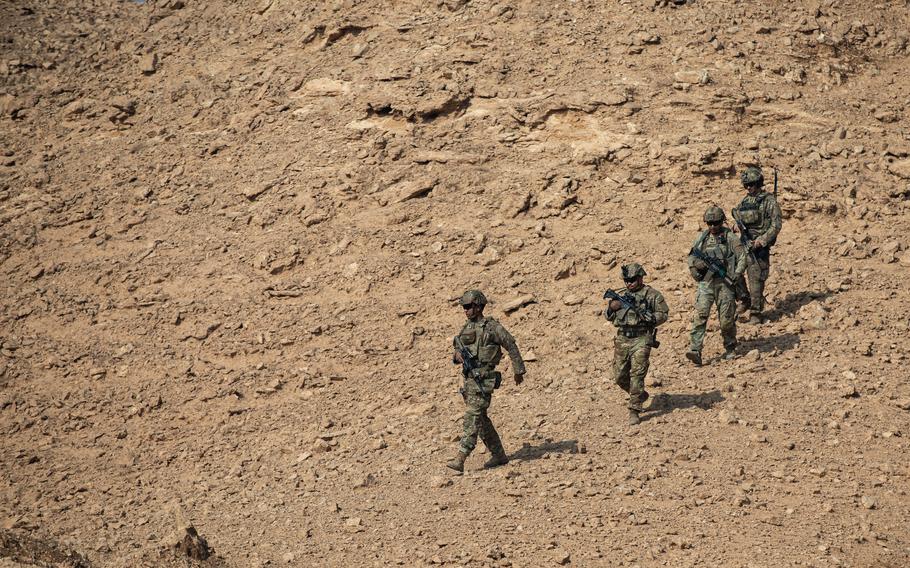 The U.S. military and partner forces launched hundreds of operations against the Islamic State in Iraq and Syria in 2022, Central Command said Thursday, as attacks by the militants grew more brazen at the outset of the year.

No U.S. troops were killed or injured in any of the 313 declared operations this year, CENTCOM said.

The operations included raids on militants such as ISIS leader Abu Ibrahim al-Hashimi al-Qurayshi, who killed himself, as well as fighting to contain a prison attack in northern Syria.

The number of operations is slightly less than in 2021, before the combat mission in Iraq ended in favor of an advising role, Col. Joe Buccino, CENTCOM spokesman, said in an email Thursday. Buccino declined to quantify how many fewer missions there were.

ISIS attacks against the Syrian regime dropped in 2021, as fighters withdrew to more remote parts of central Syria, according to International Crisis Group, a multinational think tank.

Others moved into Iraq or northeastern Syria and concentrated their forces where U.S. and partner forces operate. In January, ISIS militants overran al-Sinaa prison in the Syrian city of Hassakeh as part of an attempted prison break. The ensuing 10-day battle led to the deaths of more than 420 ISIS militants and 120 members of the U.S.-allied Syrian Democratic Forces, the CENTCOM statement said Thursday.

Some 191 of anti-ISIS operations took place in Iraq, where U.S. troops officially act only in an advisory role, and 122 took place in Syria, a number that included 14 unilateral U.S. missions, the statement said.

“While ISIS is significantly degraded in Iraq and Syria, the group does maintain the capability to conduct operations in the region, and we know the group has the desire to strike outside of the region,” Army Gen. Michael Erik Kurilla, head of CENTCOM, told reporters in a phone interview last week.

Roughly 900 U.S. troops are based in Syria to support counter-ISIS operations by partner forces, The Washington Post reported Dec. 6.

U.S. troops also remain in Iraq as part of anti-ISIS operations despite the formal end of the U.S. combat mission there in 2021.

The U.S. has been fighting ISIS since the militant group conquered about a third of Syria and 40% of Iraq in 2014. ISIS lost its last territorial enclave in 2019.

One prison facility, the al-Hol camp in northern Syria, contains 56,000 people, more than 90% of whom are women and children related to ISIS militants, Kurilla said after a visit to al-Hol in September.

The poor conditions, which include sweltering heat and limited access to water, may foster radicalization, he said.

“We have the potential for the next generation of ISIS,” Kurilla said in Thursday’s statement.