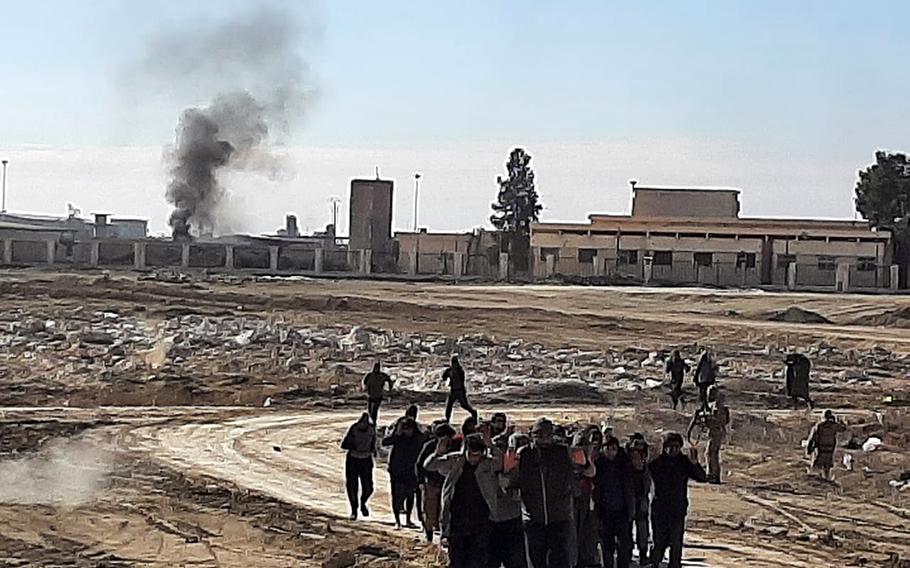 Thousands of Islamic State fighters jailed in Syria had to be hustled to a more secure facility in the midst of a 10-day prison siege by the militants aimed at freeing them, according to U.S. officials.

On Sunday, the U.S.-allied Syrian Democratic Forces announced that they had retaken the al-Sinaa prison in the northeastern city of Hassakeh after “eliminating the last enclaves” of ISIS fighters barricaded in dormitories.

The attempted prison break, which began Jan. 20, “ultimately sped up the clock to ensuring the detainees are in a hardened facility from which they will never escape,” Army Brig. Gen. Isaac Peltier, commander of the Special Operations Joint Task Force-Levant, said Sunday in a separate statement.

Had they succeeded, the militants likely would have carried out further attacks in Hassakeh and elsewhere, the SDF said in a statement Monday, adding that the assault was part of a long-planned operation that drew militants from neighboring Iraq.

Detainees were still being accounted for late Monday, said Maj. Chuck An, a spokesman for the U.S.-led special operations task force, in an email to Stars and Stripes.

The Hassakeh facility is one of the largest in the region housing ISIS members captured on the battlefield during the campaign that began in 2014 to liberate swaths of the country from their control. 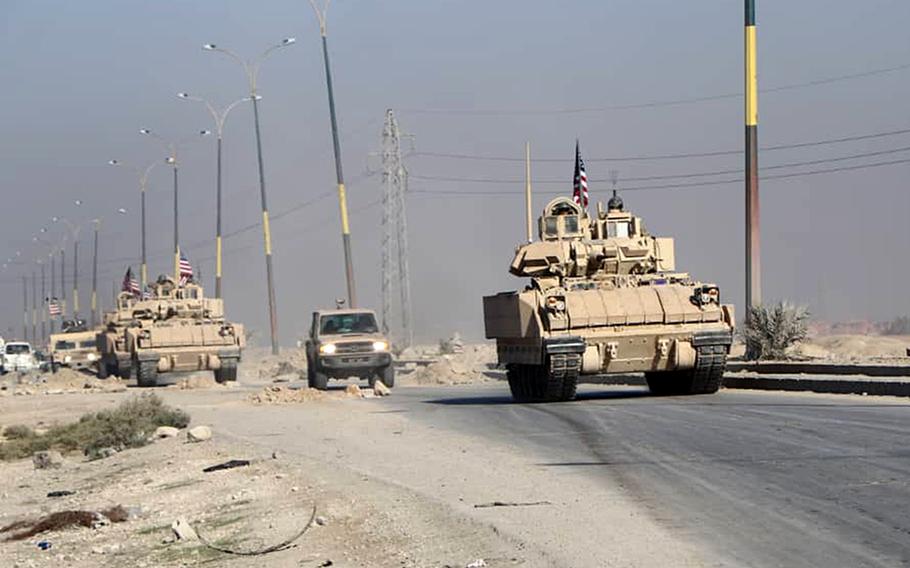 American troops make their way along a road near the al-Sinaa prison in Hassakeh, Syria. An attack on the prison by Islamic State militants ended Sunday after 10 days. (Twitter/Syrian Democratic Forces)

The Kurdish-led SDF was recovering remains and clearing the area, the joint task force said. The command provides training, assistance, advice and operational support to partner forces in the region.

The coalition backed the SDF with real-time surveillance, airstrikes and limited ground forces to suppress the prison break. The U.S. Army’s Bradley Fighting Vehicles helped establish a perimeter to contain the fighting.

Using car bombs and suicide belts, dozens of militants had overrun the facility, while prisoners inside rioted. They took some of the hundreds of child detainees hostage and used them as human shields during the battle for control of the prison, Kurdish officials have said.

After negotiations with the SDF, most of the fighters surrendered and released their hostages, and SDF fighters killed or captured senior leaders of the militant group, the coalition said.

U.S. officials have repeatedly urged countries to repatriate their ISIS-affiliated citizens held in such facilities so they can be prosecuted or rehabilitated, but many are reluctant to do so.

The U.S.-led coalition has also warned of likely ISIS attempts to free its members from the makeshift detention facilities, where inmates have staged several riots in recent years in attempts to escape.

This month’s prison break was the biggest ISIS operation since the group was ousted from its territorial “caliphate” in 2019, The Associated Press reported.

The SDF had said Wednesday that it gained full control of the facility after the surrender of over 3,000 detainees, but clashes resumed when a later sweep uncovered dozens of armed fighters holed up in a dormitory basement.

At the new, more secure facility where the detainees were taken, the SDF will use biometrics to enroll prisoners, an unidentified coalition official told the AP last week. The attackers had initially targeted that facility but failed to take it, the news agency reported.

“Thanks to the bravery and determination of the SDF, many of whom paid the ultimate sacrifice, ISIS failed in its efforts to conduct a large-scale prison break to reconstitute its ranks,” U.S. national security adviser Jake Sullivan said Sunday in a statement.

The death toll is expected to rise as clearing operations continue and more remains are found.

The continued presence of tens of thousands of ISIS families in Syrian detention camps is “a time bomb with a pulled safety pin,” Kurdish officials said Monday. They urged the creation of an international tribunal to prosecute them.