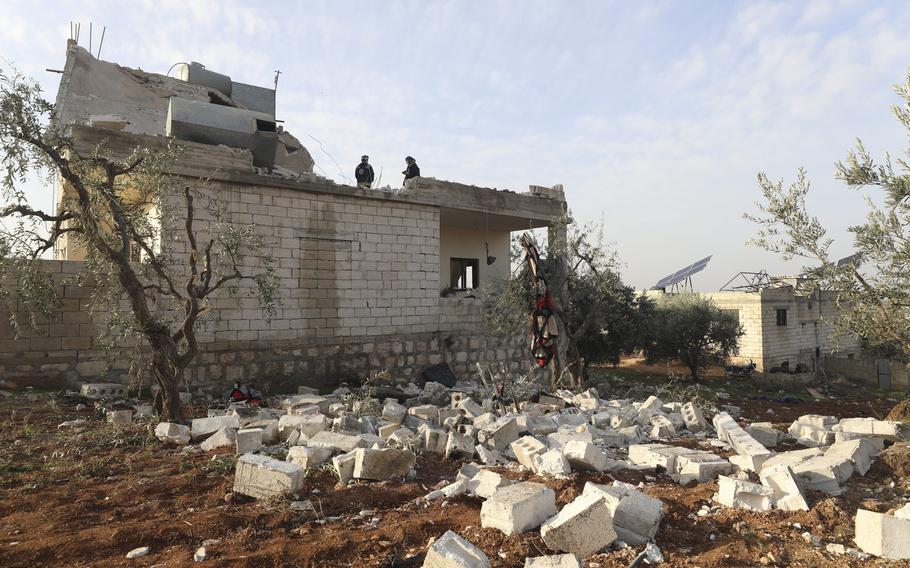 People check a destroyed house after an operation by the U.S. military in the Syrian village of Atmeh, in Idlib province, Syria, Thursday, Feb. 3, 2022. U.S. special forces carried out what the Pentagon said was a successful, large-scale counterterrorism raid in northwestern Syria early Thursday. Local residents and activists said civilians were also among the dead. (Ghaith Alsayed/AP photo)

WASHINGTON — The pre-dawn raid Thursday by U.S. special operations forces in northeastern Syria was designed to capture the leader of the Islamic State group, who instead blew himself up along with members of his family rather than be taken alive, top Pentagon officials said.

Elite American troops spent months planning and coordinating the operation, conducting tabletop exercises and dry-runs intent on avoiding civilian casualties and capturing ISIS leader Abu Ibrahim al-Hashimi al-Qurayshi, the officials said in separate briefings Thursday. But as the U.S. troops surrounded al-Qurayshi’s home and called through a megaphone for the occupants to surrender, the ISIS leader detonated a bomb that destroyed the building’s third floor, killing him and several others, including his own wife and children, officials said.

“The objective was to finish his leadership of ISIS and that was achieved,” chief Pentagon spokesman John Kirby told reporters. “This is a man who we should all be happy is no longer walking on the face of the Earth.”

The explosion was larger than a typical suicide vest blast — such as the one that al-Qurayshi’s predecessor, Abu Bakr al-Baghdadi, used to kill himself as American forces cornered him in a similar raid in Syria in 2019, said Marine Gen. Kenneth McKenzie, the leader of U.S. Central Command who was the senior commander for both attacks.

“Let me be clear, [al-Qurayshi] did not fight,” McKenzie said during a virtual appearance with the Middle East Institute. “He killed himself and his immediate family without fighting, even as we attempted to call for his surrender and offered him a path to survive.”

The general said 10 noncombatants at the house — an adult male, an adult female and eight children — were saved from harm and, ultimately, left at the site after U.S. forces departed.

Though using ground forces elevates the risk of troop casualties, the decision to raid the compound rather than conduct an airstrike was a deliberate attempt to prevent unintentional civilian deaths, President Joe Biden said Thursday.

“Knowing that this terrorist had chosen to surround himself with families, including children, we made a choice to pursue a special forces raid at a much greater risk to our people rather than targeting him with an airstrike," Biden said in a public address.

U.S forces, however, did kill at least four people during the raid. Two people — an ISIS militant and his wife — were killed after firing on troops as they arrived at the building’s second floor, said Kirby, who described the militant as one of al-Qurayshi’s top lieutenants. Kirby did not name the fighter.

A child was also killed on the second floor, Kirby and McKenzie said. The general indicated ISIS fighters were believed to be responsible for the child’s death.

Two others killed in the event were from a group of armed men “linked to al-Qaida” who entered the scene as American troops cleared the building after the explosion, McKenzie said. They were struck by helicopter gunfire, while others in their group fled the scene.

McKenzie and Kirby said it was possible more people died during the raid — particularly in the blast set off by al-Qurayshi. McKenzie said he did not believe American troops had accidently killed any civilians during the operation.

“The mission was carefully designed, and we believe very effective in minimizing harm to noncombatants,” the general said. “But, as always, we'll look into whether any unintended harm resulted from U.S. actions.”

Kirby said the Pentagon could also review the incident to be certain no U.S. troops killed noncombatants.

“We certainly are willing to take a look to see if there’s any possibility that anything that we did might have caused harm to innocent life,” he said.

The emphasis expressed Thursday by U.S. officials on reducing casualties comes after recent criticism of American airstrikes killing civilians, highlighted by an attack in the final days of the U.S. war in Afghanistan when American forces killed 10 civilians in an Aug. 29 strike on a car in Kabul mistakenly identified as one belonging ISIS terrorists.

Gen. Sami Said, the Air Force inspector general, said in November that a review of the airstrike revealed no criminal wrongdoing, instead calling it “an honest mistake.”

“The issue here is to figure out what we could have done better to make sure this never happens again,” he said at the time.

Last week, the Rand Corp. issued a report analyzing Pentagon civilian casualty policies and procedures that found the “military's data and records that support assessments of civilian harm can be incomplete.”

“The military’s standard for finding a civilian casualty report to be credible is higher than advertised,” the report said.

The report further found the U.S.’s intelligence efforts focus too much on the enemy, “limiting resources available to understand the broader civilian picture,” and that some combatant commands “are unprepared to address civilian-harm issues.”

McKenzie, who is due to retire from the military later this year, said al-Qurayshi’s death would deal a blow to ISIS in Syria and Iraq as well as its affiliates around the globe.

Nonetheless, the general said ISIS remains the largest terrorist threat to Americans, and the group is steadfast in its desire to attack the United States and other Western nations.

Al-Qurayshi was not as well-known as al-Baghdadi, but McKenzie speculated the loss of the latest ISIS leader might be more difficult for the terrorist group because he was more of a battlefield tactician than his predecessor, who founded ISIS.

“I can assure you that he was every bit as evil and every bit as committed to attacks on the United States and our partners” as al-Baghdadi, McKenzie said. “In fact, while Baghdadi was iconic and a philosophic figure in ISIS, this guy is actually far more of an operational planner and a director of operations…His loss blunts some of ISIS’ ability to [plan] for now.”