US works to scale up intelligence networks in Central Asia 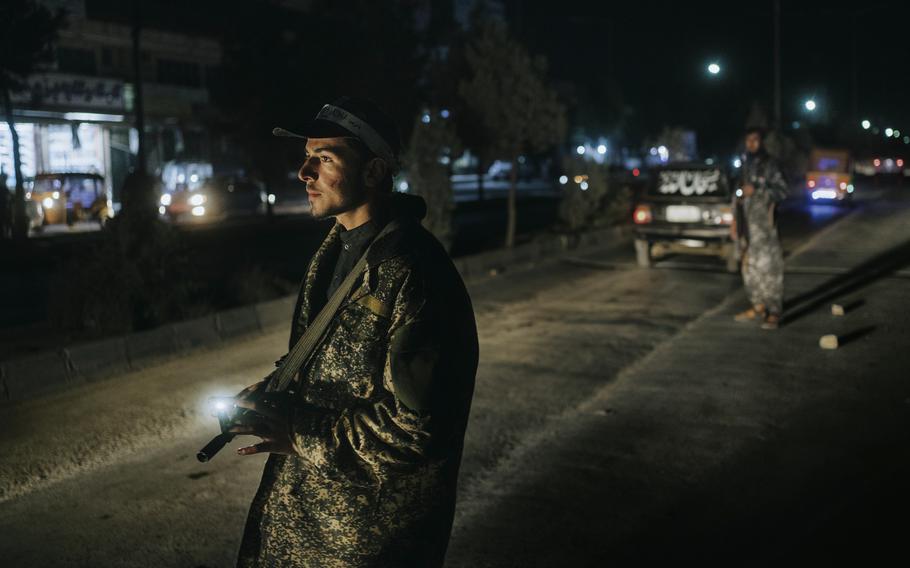 DUSHANBE, Tajikistan — Since U.S. troops left Afghanistan last August the Pentagon has been desperate to augment its "over-the-horizon" ability to track from afar and strike emerging terrorist threats — ideally with some kind of basing in Central Asia to launch drones and other surveillance flights.

But on a trip through the region this month, the U.S. military's top commander overseeing Central Asia didn't even broach the subject with local political and military leaders.

Kurilla said the U.S. will not attempt to bigfoot countries uncertain about American staying power and unwilling to offend Russia, the major power in this part of the world. "This is going to be a very nuanced approach. … We are going to have to be very patient and it will be incremental gains," he said of any military-to-military engagement.

Kurilla's trip came just a few weeks after Donald Lu, the assistant secretary of state for South and Central Asian affairs, also led a U.S. delegation around the region, which sits at a geopolitical crossroads between Russia, China, Iran and South Asia. Kurilla is trying to log stops in nearly every country in his area of responsibility before delivering his first threat assessment to the defense secretary. But his visit is also taking place against the backdrop of Russia's invasion of Ukraine and emerging concerns in Central Asia about the Kremlin's revanchist goals in former Soviet territory.

The United States now sees an opportunity to "counterbalance" Russia's influence in Central Asia, in the words of one senior State Department official, who spoke on the condition of anonymity because of the sensitivity of negotiations with regional leaders.

"It potentially gives us an opening to do more with them in security cooperation and counterterrorism," the official said.

On his tour, Kurilla spent as much time, if not more, observing local sports competitions, racing mountain horses, attending traditional dance showcases, and eating multiple-course dinners as he did in closed-door meetings. Embracing a cultural itinerary more common to diplomatic visits was intentional, he said.

"You can't get to know a people, a culture, just by sitting in meetings," Kurilla said after one lavish dinner in Uzbekistan that came with dozens of dancers and musicians as well as one Frank Sinatra impersonator that performed for him, as the Uzbek chief of defense looked on approvingly.

"This is how we rebuild our HUMINT network," Kurilla said in an interview, referring to "human intelligence." "We're not going to be able to process over-the-horizon CT [counterterrorism] looking through a soda straw" — a reference to the narrow perspective of video from drones.

The countries of Central Asia have networks and ties that go deep into Afghanistan. In some cases, that is due to continuous diplomatic engagement with the Taliban stretching back long before last year's takeover; in others, to the presence of minority groups — particularly ethnic Uzbeks and Tajiks — that live on the other side of the border.

"Part of this is to look at each one of these states' ability," Kurilla said. "They all have slightly different access, based on ethnicity."

The intelligence that Central Asian nations could provide the United States on the reconstitution of terrorist threats in Afghanistan is considerable, according to military and diplomatic officials engaged in the region.

The key, however, is to get them to share it liberally.

"One of the things that has sometimes frustrated our folks is that it feels too one-sided; it's going from us to them and not vice versa," said the senior State Department official.

Yet, according to local experts, if the United States wants more advantageous security partnerships, it needs to first prove it is committed to the wider region for the long haul — even if it loses interest in Afghanistan.

"What Central Asian countries would welcome is for the United States … to talk to Central Asian countries as them, instead of as an attachment to Afghanistan," said Emil Dzhuraev, an independent researcher formerly with the OSCE Academy in Bishkek, Kyrgyzstan. Central Asian states need to see a scale of investment — ideally economic — that would illustrate that "the U.S. is fully present."

Since being forced out of its last Central Asian base in 2014, the United States has focused assistance efforts primarily on law enforcement and border security, supplying items like patrol boats and vehicles to Uzbekistan, and radios, night-vision devices and ground sensors to Tajikistan, to keep threats from flowing north out of Afghanistan. The United States has also announced plans to supply Tajikistan with another $60 million in assistance over the next two years, including almost $20 million worth of Puma drones.

"Small investments really help," Kurilla said in an interview. "But if we provide too much assistance, Russia can come back and squash them hard."

Here in Tajikistan, Moscow maintains its largest foreign military base on the outskirts of Dushanbe. After years of leaving patrols of the country's nearly 850-mile border with Afghanistan to the locals, the Moscow-led Collective Security Treaty Organization — Russia's much-smaller answer to NATO — began carrying out exercises there several months ago.

In Kyrgyzstan, which hosts a Russian air base and where Russia's remittances make up over 30% the gross domestic product, apprehension about blowback is even more palpable. Government leaders have balked at signing an otherwise finalized bilateral cooperation agreement with the United States and when Kurilla arrived last week at Manas Airport — which served as a U.S. air base from 2001 to 2014 — none showed up to greet him.

"In regard to the question of fighting international terrorism, we are partners of the United States," Ismatullah Irgashev, Uzbekistan's special representative for Afghanistan, explained in an interview. But "our military doctrine is that Uzbekistan cannot be part of any military-political blocs. … We cannot accept that any military bases or military infrastructure be located on our territory."

Kurilla is convinced he pinpointed at least one area ripe for development. Senior military officials in Kazakhstan, Uzbekistan, Tajikistan and Kyrgyzstan all expressed interest in combat medicine training — particularly if their neighbor nations are on board. Kurilla and Kyrgyzstan's defense minister, Baktybek Bekbolotov, even traded stories of having been wounded as battalion commanders and saved by doctors in the field — Kurilla while serving in Mosul, and Bekbolotov during border skirmishes with Tajikistan, which continue almost weekly between the two countries.

"The conversation immediately changed," Kurilla said, expressing confidence that he could swiftly organize the requested training.

Central Asian leaders say they can work with the United States and help it achieve some of its goals in Afghanistan without hosting U.S. forces.

Uzbekistan, which supplies Afghanistan with electricity and serves as a key conduit for international humanitarian aid imports, claims to have achieved small but tangible successes convincing the Taliban to allow girls, including teenage girls, to attend schools in the northern border areas. They believe diplomacy can yield dividends on counterterrorism as well.

"We through communication have solved concrete problems," Irgashev said. "We see our role as bringing the requirements of the international community to the Taliban, and making them more flexible" — and responsive to demands to "break off any links with international terrorism."

Uzbekistan's government is planning to invite all Central Asian states, as well as South Asian and Middle Eastern countries, the United States and the United Nations to meet with top Taliban government officials in Tashkent. It would be the first summit of its kind since the fall of Kabul.

"Like it or not, the Taliban is the real power in Afghanistan," Irgashev said. "It's very important that the representatives of Afghanistan see and hear a unified approach from the international community toward them."