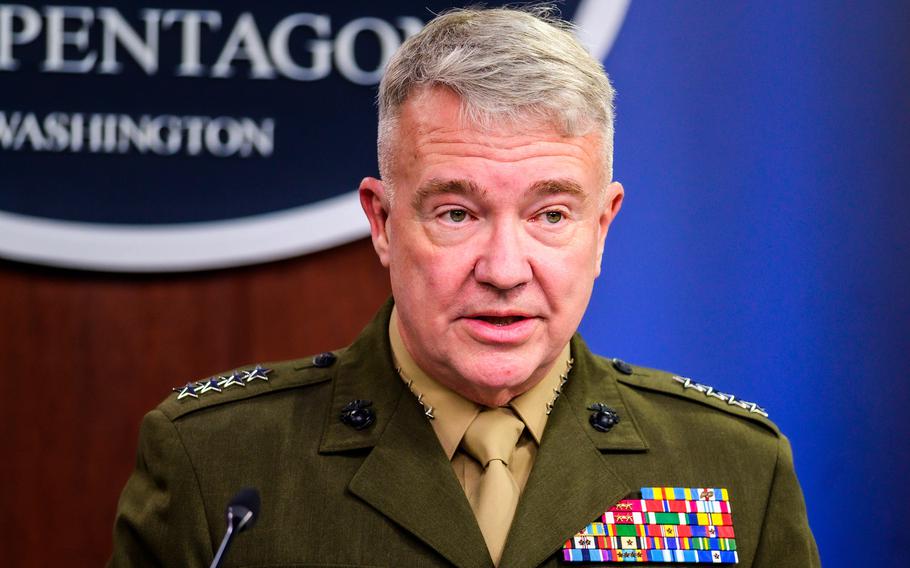 WASHINGTON — House lawmakers on Thursday pressed Pentagon officials on the impact of the U.S. withdrawal from Afghanistan, raising doubt over efforts to combat terrorism from afar and whether the U.S. is compensating civilian casualties of the 20-year war.

Reps. Rob Wittman, R-Va., and Michael Waltz, R-Fla., said they worried the exit of U.S. troops more than six months ago has hampered counterterrorism operations in the region and created a “breeding ground” for the resurgence of groups such as the Islamic State.

"I fear that we no longer have a good handle on where the terrorists are or what they're doing," Wittman said.

Marine Gen. Kenneth McKenzie, the top U.S. commander in the Middle East, confirmed those concerns in testimony to the House Armed Services Committee, acknowledging the difficulties of combating terrorism from outside Afghanistan.

“I regret that we no longer have the ability to be as effective as we would like to be on the ground,” said McKenzie, who leads U.S. Central Command. “The counterterrorism mission — we’re doing that over the horizon and as I’ve said, it’s much harder to do that over the horizon.”

The post-withdrawal “over the horizon” strategy depends on uncovering and neutralizing threats through aerial surveillance and drones launched from outside the country rather than with troops on the ground.

The U.S. has not launched any strikes in Afghanistan since the last American troops departed its capital of Kabul in August, McKenzie said. But he characterized the February raid that killed an Islamic State leader in Syria as an example of the strategy working successfully. Abu Ibrahim al-Hashimi al-Qurayshi blew himself up after the U.S. used an intelligence tip to locate al-Qurayshi's home and sent in U.S. commandos to capture or kill him.

Conducting such operations in Afghanistan remains "difficult but not impossible," McKenzie said. The U.S. lost significant intelligence capabilities by exiting the country and is now increasingly reliant on its relationship with neighboring Pakistan for intelligence, surveillance and reconnaissance missions, he said. Pakistan is friendly with the ruling Taliban government in Afghanistan.

Waltz, an Army veteran of the Afghanistan war, likened the dependency on Pakistan to “an arsonist asking for access to the fire department to put out a fire.”

The U.S. is also counting on the Taliban, a sworn enemy of the Islamic State, to help counter the resurgence of Islamic State-Khorasan, the Afghan affiliate of ISIS. McKenzie warned ISIS-K was “rejuvenated” by the Taliban’s release of thousands of prisoners, including ISIS-K fighters, from U.S.-maintained jails last year and the general said the group would soon ramp up its attacks.

“We are very concerned about the potential for ISIS-K growth in Afghanistan,” he said. “We assess that they do retain a desire to attack us in our homeland here in the United States, and absent effective pressure, that threat will only grow and metastasize over time.”

The group is expected to establish the ability to attack the U.S. and its allies within 12 to 18 months, according to McKenzie. Al-Qaida, an ally of the Taliban, maintains a low-profile in Afghanistan but the terrorist group is likely looking to recruit and train fighters and restore the capacity to launch external attacks within a year or two, he said.

About 153 U.S. citizens remain in Afghanistan, along with 2,100 long-term permanent residents, according to McKenzie. He told the Senate earlier this week that U.S. citizens are able to leave the country.

Rep. Jackie Speier, D-Calif., said she asked the Pentagon to provide a report on the status of Afghan women and girls following the withdrawal and update Congress on condolence payments for deaths caused by the U.S. military.

Lawmakers authorized the Defense Department to spend up to $3 million a year to compensate for death, injuries or property damage.

Speier grilled McKenzie and Sasha Baker, the deputy undersecretary of defense for policy, on the status of payments for the 10 civilians killed in a botched drone strike as U.S. forces evacuated Kabul. The Pentagon initially said the Aug. 29 strike was necessary to prevent an attack on troops, but it resulted in the death of seven children.

McKenzie said the U.S. was “moving forward” with those payments while Baker declined to discuss details in public.

Visibly frustrated by the delay, Speier asked, “Are you saying there hasn’t been any payments made to these families yet?"

“I want to make sure that when we make a commitment we deliver on it," she said.