Russia to boost military in west, expanding to 1.5 million troops 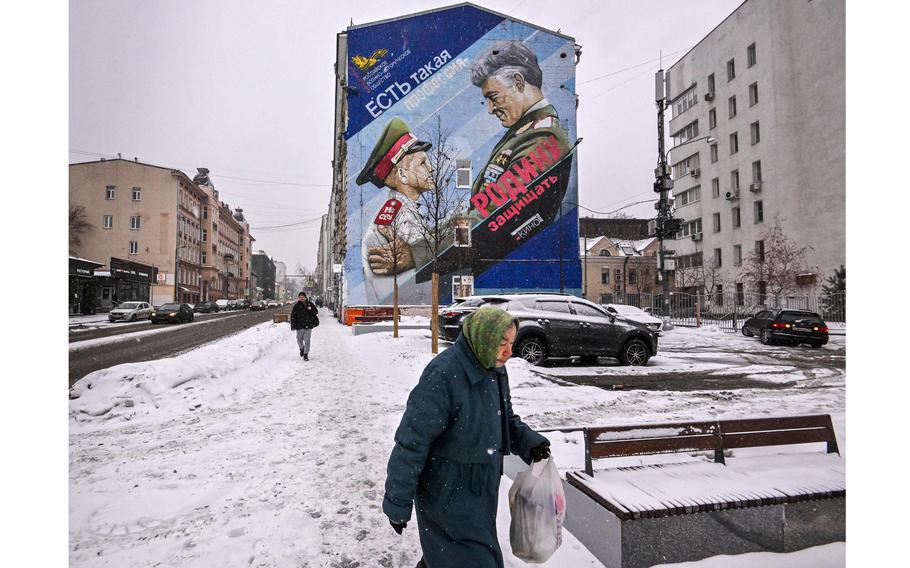 A pedestrian walks past a mural depicting a Russian General and a cadet with a slogan reading “There is such a profession — to defend the homeland” in Moscow on Jan. 17, 2023. (Yuri Kadobnov, AFP via Getty Images/TNS)

Russia will create new commands near Europe as it expands its military to 1.5 million people amid deepening tensions with the U.S. and its allies over the Kremlin’s invasion of Ukraine.

New structures in the regions around Moscow, St. Petersburg and Karelia on the border with Finland will be created under the program, Defense Minister Sergei Shoigu told commanders Tuesday, saying the major changes will start this year and continue through 2026. In addition, he said, “self-sufficient” units will be set up on the Ukrainian territories that Russia has illegally annexed.

Kremlin spokesman Dmitry Peskov said the military expansion came in response to the “proxy war” he claimed the U.S. and its allies are waging against Russia in Ukraine, Interfax reported. Kyiv and its allies are fighting to fend off Russia’s invasion of its neighbor.

Russian President Vladimir Putin last month approved Shoigu’s plan to boost the size of his military from the current target level of 1.15 million but the Kremlin hasn’t said how fast that will take place.

Shoigu said the expansion will be spread across all branches of Russia’s military and will be coordinated with the delivery of new weapons to equip them, the Defense Ministry said in a statement, according to Interfax.

Russia will create three new motorized-infantry divisions and two airborne divisions, combining a number of brigades, Shoigu said in comments posted on the ministry’s Telegram channel. He also called for special attention to the recruitment of contract soldiers to fill out the ranks of the expanded military.

Since ordering the invasion nearly a year ago, Putin has laid plans to reverse years of reductions in the ranks of Russia’s military. The Kremlin hasn’t said how it will recruit all the new troops, but has proposed raising the draft age, which may increase the number of men eligible for conscription.

Russia has repeatedly said it plans to boost deployments in the northwest in response to a pending expansion of NATO, where Finland and Sweden are in the process of joining, with their applications ratified by 28 of 30 alliance members. The Nordic countries’ entry into the military bloc would double its land border with Russia.