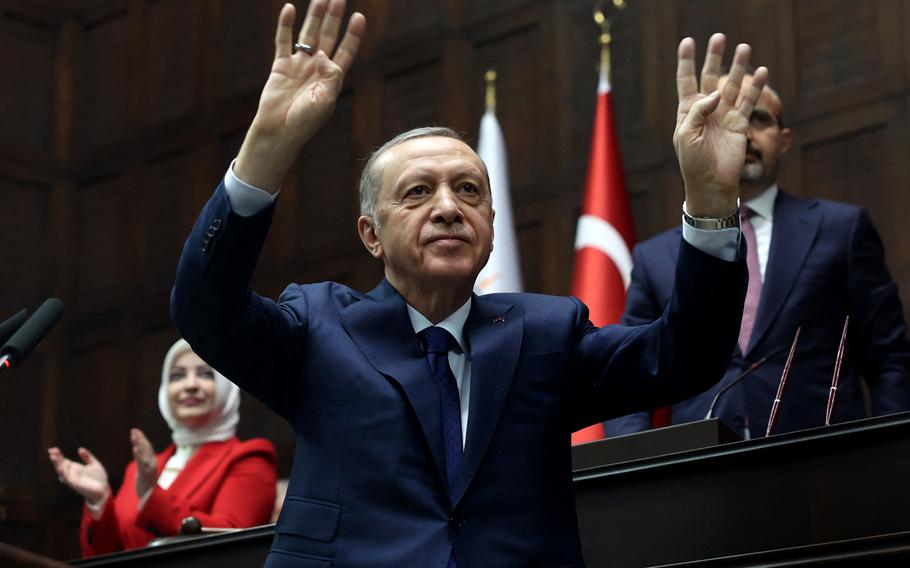 Turkish President and leader of the Justice and Development Party Recep Tayyip Erdogan attends a meeting to address the parliamentary group of his party at the Grand National Assembly of Turkey in Ankara on Jan. 4, 2023. (Adem Altan, AFP/Getty Images/TNS)

(Tribune News Service) — Six months after Turkey agreed to NATO allies inviting Sweden and Finland to join the alliance, the expansion has stalled as Ankara holds out on ratifying the applications.

Fresh tensions flared last week after protesters in Stockholm affiliated with Kurdish movements hanged an effigy of President Recep Tayyip Erdogan, prompting Turkey to put yet more pressure on Sweden to crack down on outlawed groups.

Now, with a Turkish election due in June, and Erdogan hinting repeatedly that the vote could come in May to keep the opposition off-balance, the situation seems more in limbo — even if NATO diplomats are confident it will be resolved in the end, potentially in time for the alliance’s summit in Vilnius in July.

By now, 28 of the North Atlantic Treaty Organization’s 30 members have ratified the Nordic application, with Turkey and Hungary the lone holdouts.

The two put in their bids for accession in May following Russia’s invasion of Ukraine. Turkey’s opposition was a surprise, since it had raised no objections earlier.

An agreement hammered out at NATO’s June summit in Madrid allowed the process to move forward, but Ankara’s position is little changed.

Turkey says Sweden must do more to tackle terrorist support among a Kurdish population of about 100,000, and to extradite suspects. While Turkey has also made demands of Finland, it’s said it is happy with Helsinki’s level of cooperation.

Sweden has to “show through actions, and not just through words or statements, that the PKK will not be present, will not be allowed to collect money, or to recruit members,” presidential spokesman Ibrahim Kalin said Saturday. PKK, the Kurdistan Workers’ Party, is banned across the European Union and has also been labeled a terrorist organization by the U.S.

Sweden’s government has already tightened its anti-terrorism laws, but has acknowledged it won’t be able to meet all of Turkey’s demands. Although Sweden has deported at least one of the suspects sought by Erdogan, its government can’t overrule courts in extradition cases where the judiciary has declined to send the accused to Ankara.

Still, Erdogan continues to insist Sweden needs to hand over “about 130” people.

“We told them that if you do not hand over terrorists among you, we cannot pass it through the Parliament,” Erdogan said Sunday, according to state-run TRT television. “If they do not take a stand against the PKK provocation, our relations with Sweden may become much more strained.”

Prime Minister Ulf Kristersson was unfazed by the demands, saying Monday that they are “nothing new, and I don’t think that anything fundamental has changed.”

“It is well known that Sweden has legislation when it comes to extraditions that we will follow,” Kristersson told reporters. “There are demands from Turkey that are tried according to due process.”

For Erdogan, the sway he now has over Finland and Sweden is potentially a once-in-a-lifetime political gift after years of feeling that his concerns over terrorism have been shrugged off by allies.

“He was very unhappy with a number of NATO countries and I’m sure that he wanted to advance his positions in the wider NATO sphere by leveraging the accession of Sweden and Finland,” Finnish President Sauli Niinisto said of Erdogan in an interview with Sweden’s Dagens Nyheter newspaper Saturday.

Pushing the demands most notably allows Erdogan, 68, to appear strong to voters as he seeks to extend his rule for another five years.

“Erdogan will hold the Finnish and Swedish NATO memberships hostage for as long as he thinks it will benefit him,” said Minna Alander, research fellow at the Finnish Institute for International Affairs. Turkey’s leader is likely weighing up whether there’s more benefit to him to ratify the bids before or after the election, she said.

NATO diplomats are cautiously optimistic the issues will be resolved in the end, most likely after Turkey’s election. One noted that a stronger NATO ultimately works in Turkey’s favor, especially in the Black Sea and the Middle East.

The alliance’s chief Jens Stoltenberg last week repeated he was confident the Nordic countries’ accessions would be ratified. For Finland and Sweden the process — which can take years — has already moved faster than any other in the alliance’s modern history, he added.

While it’s no surprise Erdogan is looking to use his leverage for as long as possible, there’s still a catch: the U.S., the most powerful country in the military alliance, has put its weight behind the Nordic nations. It’s also using a potential $20 billion sale of F-16 fighter aircraft as a lure to get Ankara to fall in line.

The U.S. cautioned Turkey that Congress may not approve the jet sale unless Ankara ratifies Sweden and Finland’s NATO bids, said a senior Turkish official speaking anonymously due to the sensitivity of the information. U.S. officials are linking the issues, a person familiar said, but the Biden administration has stopped short of telling Ankara that getting the jets only comes with the NATO bids being passed.

That leaves Erdogan to decide whether or when to bend to Washington’s pressure.

Should Turkey hold out past its elections, Finnish policy makers have said they’re hoping for progress before the Vilnius summit that starts July 11. The Nordic countries hope to attend as members, but as formal invitees to join the alliance they’ll be there in any event.

The delay in accession means Sweden and Finland aren’t yet covered by NATO’s collective defense commitment, Article 5. But the security risk is mitigated by commitments made by the U.S., U.K. and others to defend them if they come under attack before becoming full members. “It’s inconceivable that Finland and Sweden will face any military threats without NATO reacting to that,” Stoltenberg said.

There’s also downside to stalling the Nordic bids indefinitely: the longer Erdogan waits, the more questions will be asked by other NATO members on how committed he is to the bloc and allies’ security — or whether he’s playing into Russia’s hands.

Suggestions that Turkey is dragging its feet to do Russia a favor have nothing to do with reality and are a repudiation of Turkey’s concerns about the PKK, said a senior Turkish official speaking anonymously due to the sensitivity of the information.

With assistance from Jennifer Jacobs, John Follain and Niclas Rolander.