(Tribune News Service) — In the latest sign that Sweden’s entry into the North Atlantic Treaty Organization isn’t imminent, Sweden Prime Minister Ulf Kristersson said Turkey is asking for too much of the Nordic country in exchange for ratifying its membership.

While Turkey has confirmed that Sweden has done what it said it would do, “they also say that they want things that we cannot and do not want to give them,” Kristersson said at a security policy conference Folk och Forsvar in Sweden on Sunday. “And now the decision rests with Turkey,” he added.

Turkey has objected to Sweden and Finland joining NATO since they put in bids in May, arguing that they need to do more to combat terrorism, including extraditing people who Turkey accuses of terrorist links. A recent poll showed that 8 in 10 Swedes think that the Nordic country should refrain from compromising on its legal principles.

Last month, Sweden’s Supreme Court ruled against the extradition of a man Turkey has said was involved in a 2016 coup attempt against President Recep Tayyip Erdogan, prompting Turkey to call the move “a very negative development.” Both Nordic governments have insisted they will step up counterterrorism efforts, while underscoring the independence of courts in deciding on extraditions. 28 of 30 NATO countries have ratified their entry into the bloc, with Hungary also stalling.

The prime minister also said that Sweden is prepared to contribute Jas Gripen fighter jets for NATO’s Baltic air policing to help protect Estonia, Latvia and Lithuania, among other things. Sweden also stands ready to contribute to the ground defense, he said. 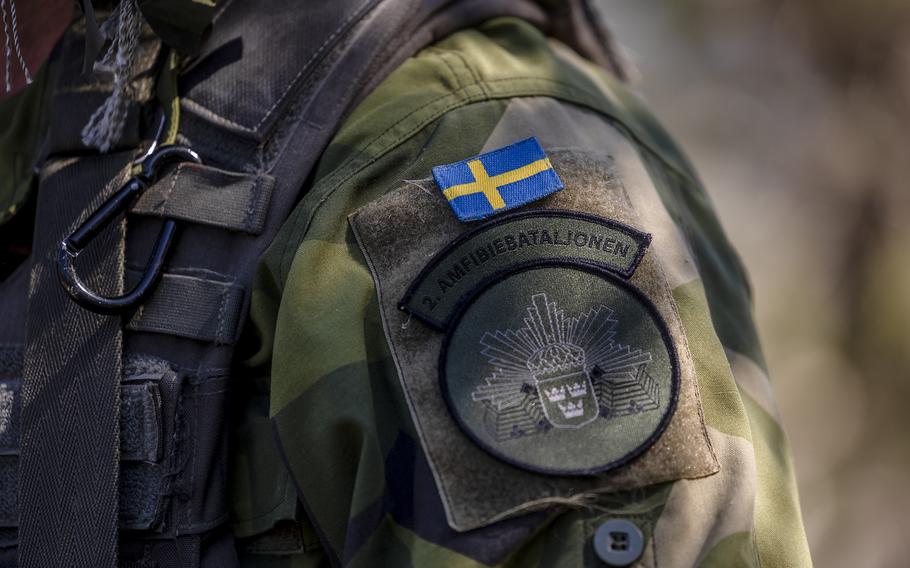 The patch of a Swedish Amphibious Battalion soldier is shown during the Baltic Operations NATO military drills on June 11, 2022, in the Stockholm archipelago, the 30,000 islands, islets and rocks off Sweden’s eastern coastline. (Jonas Gratzer, Getty Images/TNS)