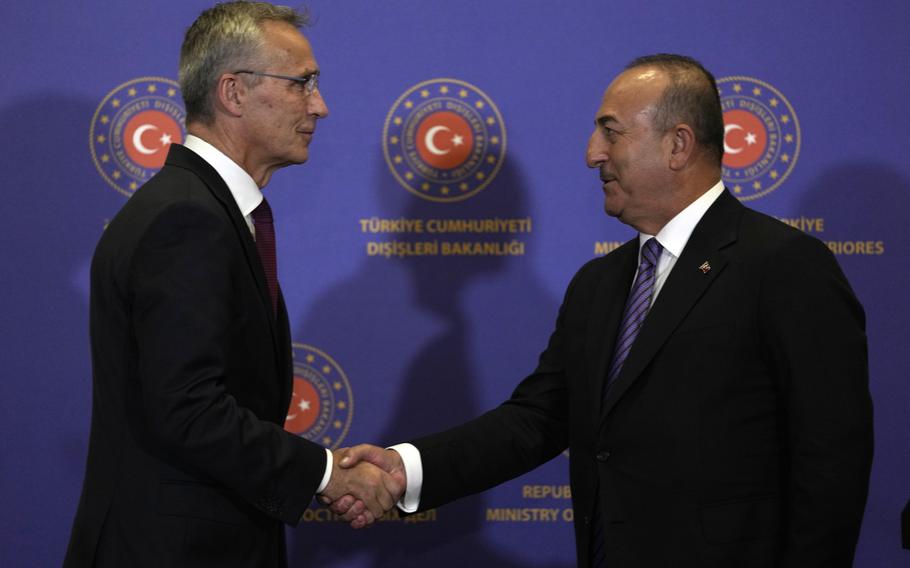 Finland and Sweden applied for NATO membership in the months after Russia invaded Ukraine, abandoning their longstanding policies of military nonalignment.

Turkey, which already belongs to the Western alliance, has threatened to block the process unless the Nordic neighbors meet its demands. The Turkish government particularly wants them to crack down on individuals it considers terrorists, such as supporters of the Kurdistan Workers' Party and people suspected of orchestrating a failed 2016 coup in Turkey.

"Finland and Sweden have delivered on their commitment to Turkey. They have become strong partners in our joint fight against terrorism in all its forms and manifestations," Stoltenberg told reporters in Istanbul after talks with Turkish Foreign Minister Mevlut Cavusoglu.

"It's time to welcome Finland and Sweden as full members of NATO. Their accession will make our alliance stronger and our people safer," Stoltenberg said. "In these dangerous times, it's even more important to finalize their accession, to prevent any misunderstanding or miscalculation in Moscow."

However, Cavusoglu said the schedule for accepting the countries as new members would depend on when Turkey's demands, agreed upon in a joint memorandum, were fulfilled.

"We want to see concrete steps," the minister said, especially in combatting extremists.

"It's not possible to say right now that the two countries have completely implemented all aspects of the memorandum," he added, while stressing that Turkey supports NATO's enlargement.

Cavusoglu said Turkey sees the new government in Sweden as "more determined" about fulfilling the memorandum signed in Madrid. The new Swedish prime minister, Ulf Kristersson, is scheduled to visit Ankara on Nov 8, he said.

All 30 NATO member countries must officially ratify the accession protocol for Finland and Sweden to join the alliance. Only the parliaments of Turkey and Hungary have yet to do so.