For much of the last 30 years Finland’s armed forces have looked a little old fashioned, still configured to fight a major land campaign in Europe as though the Cold War never ended. No more.

As Finland readies to join the North Atlantic Treaty Organization against the backdrop of Europe’s bloodiest war since 1945, in Ukraine, the Nordic nation’s military is back in vogue. Its commanders are also well aware of what they bring to the table in a potential fight.

“We have significant defensive ability to wage the kind of war that’s now taking place in Ukraine,” Finland’s top commander General Timo Kivinen said in an interview. “On a per capita basis, we have probably the most fire power in Europe.”

Finnish officials admit to frustration that the country has yet to join NATO six months after the alliance issued its invitation. That has left both Finland and fellow-invitee Sweden in a so-called “gray” zone between abandoning military nonalignment and gaining NATO’s Article 5 collective defense protections.

“We already fulfill the military criteria for membership, and looking at our defense expenditure, we comply with the 2% of GDP criterion,” Kivinen said.

Despite a population of just 5.5 million, Finland has more artillery than France and Germany combined and can call on as many as 280,000 troops in time of war. Though most of those are trained reserves, the figure is larger than that of the U.K.

Finland’s fleet of F/A-18 Hornets armed with advanced U.S. missiles will soon be replaced by 64 Lockheed Martin F-35A aircraft joint strike fighters. At sea, there are elaborate coastal defenses and a shallow water navy tailored for the rocky coasts of the Baltic, plus a capability for fighting in the Arctic and, in Lapland, Europe’s biggest training area for air combat across the three Nordic countries.

The memory of past invasions from the east has given Finland a powerful incentive to retain the means to defend its 835 mile-border with Russia even after the collapse of the Soviet Union in 1991. Other European nations dismantled their territorial defenses in the belief that a state-on-state war on the continent had become inconceivable. 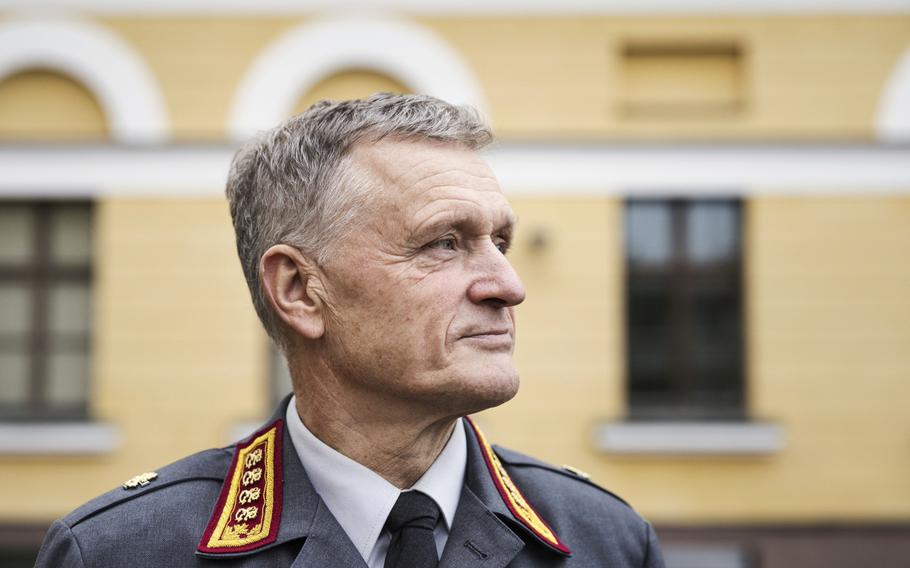 “We didn’t do that,” Kivinen said.

All but two of NATO’s 30 member countries have ratified accession for the Nordic nations, with Hungary and Turkey as holdouts. Hungary recently said it will not put ratification to parliament until next year. Turkey continues to stall, alleging Sweden harbors supporters of Kurdish terrorist organizations.

NATO diplomats and officials are convinced both Hungary and Turkey will ultimately come on board and note the ratification process is still likely to be one of the fastest in the organization’s history. And while Finland isn’t yet fully covered by Article 5, the security risk is mitigated by commitments from the U.K., U.S. and others to defend the Nordic nations if they are attacked before becoming full members.

The delay is also causing anxiety in the three Baltic states of Estonia, Latvia and Lithuania. The addition of Finland and Sweden to NATO is seen as a significant improvement to security for the hard-to-defend ex-Soviet territories, solidifying alliance control over the Baltic Sea at their backs.

But doubling NATO’s land border with Russia brings new liabilities — officials in Moscow have said they will respond. It is hard to see what they could do though because the Finland section is already defended and any Russian response would involve a dispersal of resources from other theaters.

According to Kivinen the war in Ukraine has confirmed the growing importance of air defenses in modern warfare. Finland has invested far beyond the 11 unmanned aerial vehicles listed in the Military Balance, he said, referring to a database of global military capabilities maintained by the London-based International Institute for Strategic Studies. The U.S. State Department has approved the sale of $323 million of air-to-air and air-to-surface missiles for use with Finland’s fighter jets, saying the country “will have no difficulty absorbing this equipment into its armed forces.”

But the conflict has also underscored the importance of artillery, and Finland is beefing up its already large arsenal. The U.S. has signed off on a deal that could be worth as much as $535 million to provide munitions for Finland’s fleet of M-270 multiple rocket launchers, a larger, tracked version of the wheeled HIMARs systems that have proved so effective in Ukraine. The Nordic nation is also adding to its fleet of 155 millimeter self-propelled howitzers.

These old school capabilities in artillery and infantry make Finland stand out among NATO allies. Many countries in Europe abandoned the territorial defense doctrines of the Cold War during the 1990s and early 2000s. Tanks were scrapped, field guns mothballed, head counts and defense budgets slashed.

Those countries that retained a meaningful combat capacity turned to slimmer, more mobile, all-professional forces. France ended general conscription by 2001, Sweden in 2010, and Germany in 2011. Defense spending as a percentage of the economy fell by as much as two thirds from the height of the Cold War, in the 1970s and 80s, to 2014, in NATO members such as Germany.

Russia’s 2014 annexation of Crimea began a reversal in those trends. Sweden restored conscription in 2018, while France will restart in 2024. Germany this year created a special €100 billion ($107 billion) fund to top up defense spending in the years ahead, avoiding constitutional debt limits.

That’s a circular journey Finland never took, largely because it gained independence from Russia only in 1917 and then lost 11% of its territory to a brutal Soviet invasion that began in 1939.

“Finns are more prepared,” Kivinen said, “but it’s because of our history.”