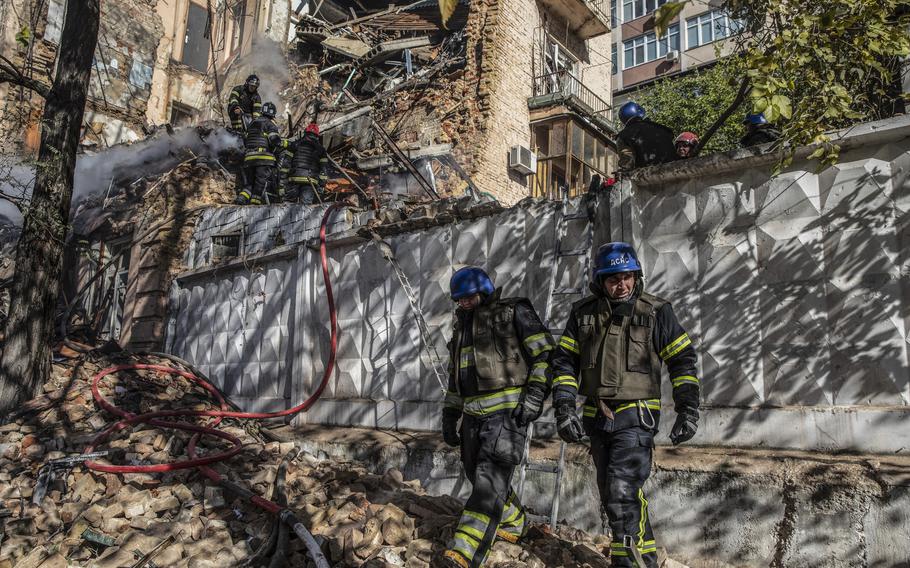 Firefighters at a residential building that was struck during a Russian attack using kamikaze drones that hit in central Kyiv, Ukraine, on Oct. 17, 2022. (Heidi Levine/for The Washington Post)

KYIV, Ukraine — When Russia invaded Ukraine, the homeland of his parents and grandparents, David felt obligated to leave Israel and fight against Vladimir Putin, the man he views as a modern Hitler.

After praying on a recent Shabbat in Kyiv’s oldest synagogue, David, 56, said he was proud to have spent most of the past nine months on the front lines, where he took fire from artillery and drones while fighting in Ukraine’s eastern offensive in Kharkiv.

But he fumed when asked about Israel, his home for more than two decades, and about its limited support for Ukraine — a stance that seems increasingly odd given the deepening alliance between Russia and Iran, whose leaders have repeatedly called for Israel’s destruction and are supporting Moscow’s war effort by supplying drones and missiles.

“Ukraine has the right to criticize the Israeli government about the lack of support,” said David, who requested that he be identified only by his first name to protect himself and his family, including relatives in Russia.

Israel’s position is ever more painful for some Ukrainian Jews as they prepare to celebrate Hanukkah, the Festival of Lights, in intermittent darkness due to the blackouts brought on by Russia’s recurring airstrikes, which have knocked out the heat in the main sanctuary of the synagogue David attends in Kyiv.

Israeli leaders have declined to provide weapons or defense systems to Ukraine and refused to join Western economic sanctions for fear of jeopardizing its security relationship with Russia.

The Kremlin allows Israeli aircraft to target Iranian arms shipments over Russian-controlled airspace in Syria, which Israel regards as critical to its national defense. 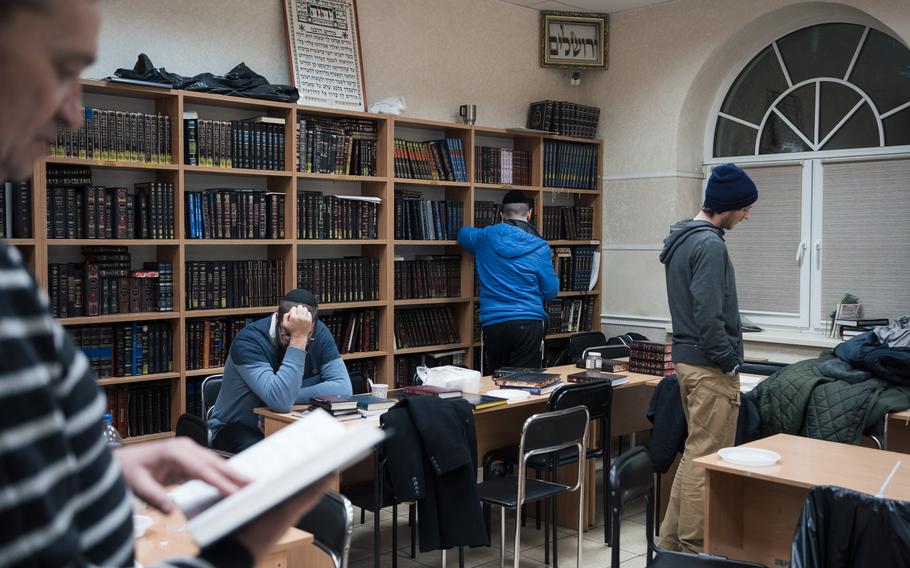 Jewish community members pray during sabbaths at a synagogue in Kyiv, Ukraine, on Dec. 10, 2022. (Anastasia Vlasova/for The Washington Post)

Israel’s stance has drawn the ire of Ukraine President Volodymyr Zelenskyy, who specifically requested Israel’s vaunted Iron Dome air defense system. Zelenskyy, who is Jewish, has invoked the Holocaust when asking for help — angering Israeli’s leaders, who rebuked him for the comparison.

This disagreement has drawn more scrutiny in recent weeks because of Russia’s increasing dependence on Iran for drones being used to attack Ukraine’s civilian infrastructure.

U.S. officials have said that “hundreds” of Iranian drones are being used by Russia to target Ukraine, with another round of strikes hitting the country this week. Western intelligence has also found that Moscow and Tehran have agreed on a plan to build weapons designed by Iran on Russian soil.

Analysts have speculated about what Russia may be providing to Iran in exchange for the drones, but the nature of their deal is not yet known. But there is little doubt that Russia’s needs are helping to develop Iran’s military production capabilities.

“What is Russia promising or implying to Iran as a quid pro quo,” said Dan Fried, a former security adviser to U.S. presidents Bill Clinton and George H.W. Bush. “Israel’s apparent short-term calculations don’t seem consistent with its long-term strategy of aligning itself with Europe and the United States,” Fried said. “What are they thinking?”

Israel has bristled at accusations that it is failing to do enough to assist Ukraine and has disputed that the Iron Dome could help Ukraine protect itself. Israeli officials have complained that they do not receive enough credit for taking in roughly 50,000 refugees from Ukraine and Russia, and providing more than $30 million in humanitarian assistance, a figure they have calculated by combining the costs of generators, medical equipment, and a field hospital, as well as other “in-kind assistance.”

That support, however, is paltry even compared to some other countries. Estonia, for example, which has a bit more than 1/10th of Israel’s population, has sent $300 million in military aid to Ukraine. 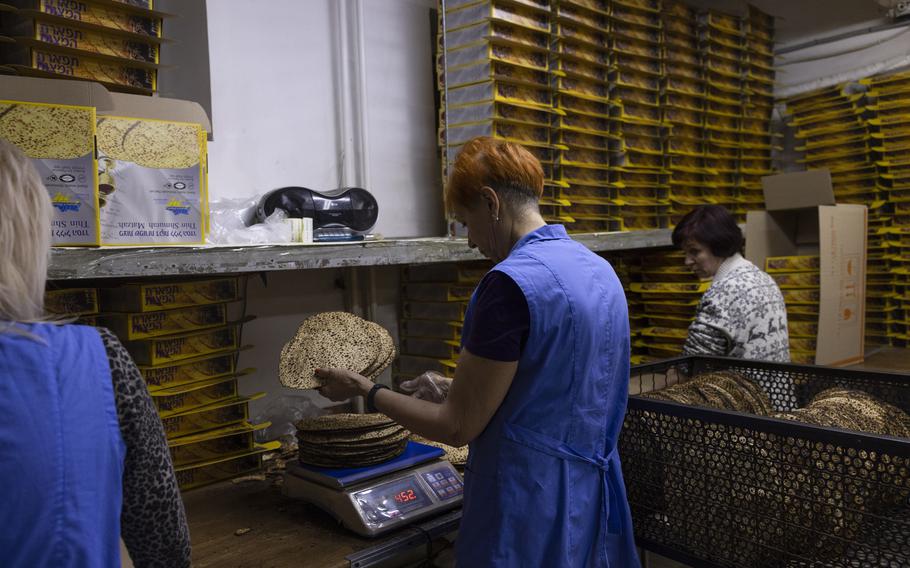 Michael Brodsky, the Israeli ambassador to Kyiv, acknowledged he has heard the frustration of some Ukrainian Jews but stressed Israel’s security ties to Russia create limits that cannot be overcome. He said most Ukrainian Jews understand Israel is in a tough position.

“No government in Israel is going to jeopardize this interest for anybody else, including the Ukrainians,” Brodsky said in an interview. Unlike the United States and Europe, Brodsky pointed out, Israel is not part of the North Atlantic Treaty Organization. “Our situation is much more fragile.”

The United States has made clear it wants all of its allies, including Israel, to impose economic sanctions on Russia and to help Ukraine. U.S. officials familiar with the matter, who spoke on the condition of anonymity to describe private diplomatic conversations, said they never expected as much support from Israel as from NATO allies in Europe, but that they were still disappointed.

Ambassador Deborah Lipstadt, the U.S. special envoy to monitor and combat antisemitism, declined to comment on Israel’s decisions. But she said that, as Hanukkah approaches, what’s happening in Ukraine “has a very strong resonance” within the Jewish community in the U.S. given that Russia’s reeducation policies in occupied territories and its “tropes” that Ukrainian leaders are “Nazis.”

Israel’s incoming leadership has sent mixed signals. Its next prime minister, Benjamin Netanyahu, has called Putin a “friend” but during his campaign hinted that he might revise Israel’s ban on providing weapons to Ukraine.

Israel’s previous prime minister, Naftali Bennett, privately warned Zelenskyy there would be consequences if he ever used his bully pulpit to pressure him again, according to other people familiar with this exchange, who also spoke on the condition of anonymity to describe private conversations. 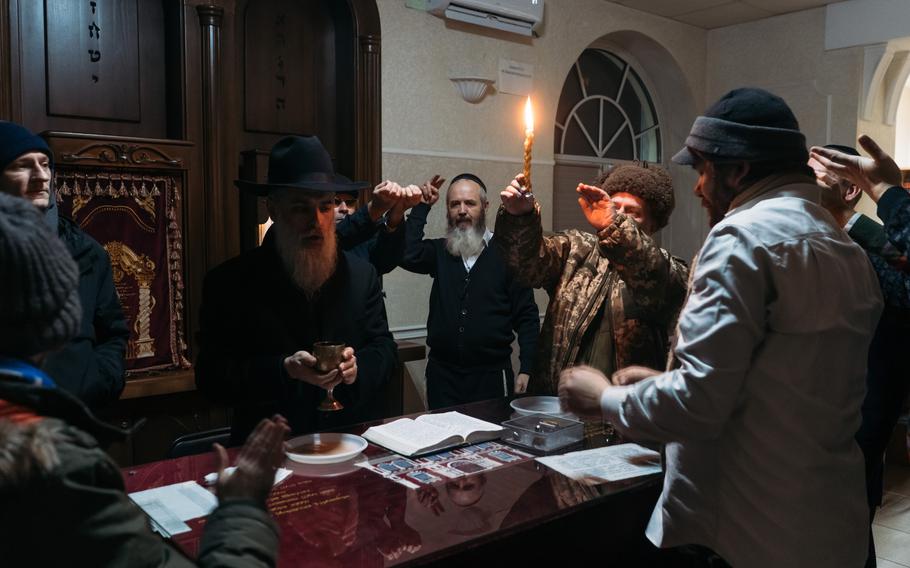 Rabbi David Goldich blesses the wine during sabbaths prayer at the Great Choral Synagogue office used instead of the main building due to power outages in Kyiv, Ukraine, on Dec. 10, 2022. (Anastasia Vlasova/for The Washington Post)

The tension between the countries has reverberated through Ukraine’s Jewish community, which has seen a dramatic resurgence in the roughly 30 years since the Soviet Union collapsed.

Ahead of his family’s Shabbat dinner in Kyiv, Nachman Dyksztejn, 45, defended Israel’s actions while saying he understood Ukraine’s need to push for military support. Though now living in Israel, Dyksztejn had returned to his home in Ukraine to help with humanitarian relief efforts including in the southern Kherson region, much of which remains under Russian occupation.

It is not for lack of patriotism, or support for Ukraine, that Dyksztejn defended Israel’s motives. He said he sees his family’s future in Kyiv when the war ends.

Dyksztejn said he asked members of Israel’s government why they were not doing more to support Ukraine. But he also pointed out that Ukraine voted several times against Israel this year at the United Nations, including on a measure related to the Palestinian territories. Israel last month then abstained from a U.N. vote on whether Russia should pay war reparations.

Feelings were also mixed at Tiferet Matzah in the central Ukrainian city of Dnipro, where roughly 70 Jews work at Europe’s biggest manufacturer of the unleavened bread eaten during Passover. Daniel Synchvkov, 31, typically works in IT, but Russian energy attacks had shut down his internet and electricity — forcing him to pick up a shift at the matzoh factory.

“It does not matter what you are — if you are Jew, Christian, Tartar, whatever — everyone here thinks every country on the planet, not just Israel, should do whatever they can to stop this war,” Synchvkov said, as he punched holes in the dough on the matzoh assembly line.

On a recent Shabbat, roughly two-dozen Ukrainian Jews gathered in a classroom behind the Great Choral Synagogue in Kyiv because of the impact of Russian missile attacks to heating in the main sanctuary.

Chanting the Hebrew prayer for peace, they bowed toward a knitted white-and-blue sign in Hebrew spelling “Jerusalem,” which pointed them in the direction of their holy land.

They also prayed for Ukraine’s defenders, Jews and non-Jews, and mourned the recent death of a Ukrainian Jewish soldier who had worn a Star of David with “Ukraine” written in Hebrew on his uniform.

At one point, Rabbi David Goldich uttered an obscenity about Putin while holding the Kiddush cup, containing ceremonial wine.

David, the soldier from Israel fighting for Ukraine, said he was compelled to do so in part because his grandfather volunteered in Ukraine’s army in 1941 to stop Hitler. Although born in Russia, he wore a patch of the Israeli flag on one sleeve — and a patch with Ukraine’s golden trident on the other.

He asked why the city of Kharkiv, home to some of the worst atrocities in the war, would not have benefited from Israeli’s Iron Dome system. “It would have been very helpful to prevent suffering cities, to prevent children from dying,” he said.