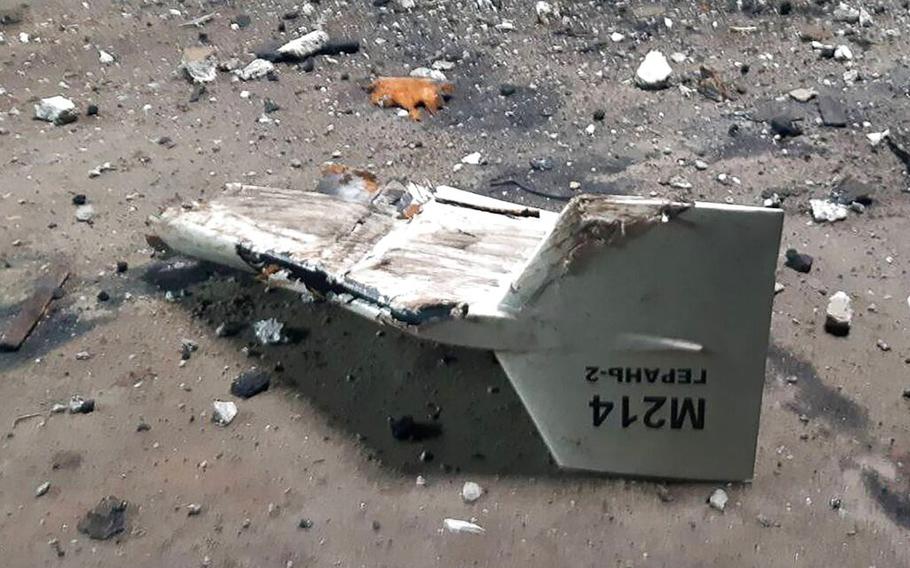 This undated photograph shows the wreckage of what Kyiv has described as an Iranian Shahed drone downed near Kupiansk, Ukraine. (Ukrainian military’s Strategic Communications Directorate via AP)

The relationship between Russia and Iran is becoming “a full-scale defense partnership” that threatens the Middle East and the rest of the world, a senior U.S. official said Friday.

National Security Council spokesman John Kirby said that “support is flowing both ways,” as Moscow offers “an unprecedented level of military and technical support” to Tehran in exchange for Iranian drones, and potentially ballistic missiles, for use in Ukraine.

The new assessment, citing intelligence reports, builds on previous U.S. reports of the sale of “hundreds” of Iranian drones, currently being used by Russia to attack Ukrainian energy infrastructure.

Now, “Russia is seeking to collaborate with Iran on areas like weapons development and training,” Kirby said. The Biden administration also had asserted previously that “dozens” of Iranian technicians went to Russian-occupied Crimea, and Russians were sent to Iran, for instructions on use of the drones.

“We are concerned that Russia intends to provide Iran with advanced military components,” Kirby said. He declined to specify what those components were but agreed “that could include air defense.” Russia’s S-400 air defense system is considered one of the world’s most capable.

British Foreign Secretary James Cleverly, referring to the U.S. statements, said in London that “sordid deals” between Tehran and Moscow posed an increasing threat to global security. Britain, he said, “will continue to expose this desperate alliance and hold both countries to account.”

The Biden administration announced sanctions Friday on three entities within the Russian military that it said were involved in training and transfers related to the Iranian drones.

The administration also announced its 27th drawdown of weaponry from Defense Department arsenals to send to Ukraine. The $275 million package includes additional 155mm artillery shells and ammunition for HIMARS, the High Mobility Artillery Rocket Systems that have been particularly effective in striking command and logistics posts behind Russian front lines, as well as unspecified “counter air defense” and “counter-unmanned aerial systems” equipment.

Systems to counter unmanned aerial systems, or drones, can include jamming devices that interrupt directional and operational radio signals sent to the aircraft, as well as munitions to destroy them in flight.

The Washington Post reported last month that Moscow and Tehran had agreed in secret to begin manufacture of Iranian-designed drones on Russian soil. But with Russia’s stockpile dwindling, and the start of production still many months away, Iran has committed in recent weeks to substantially increase its supply of UAVs to Moscow for the war in Ukraine, U.S. and allied officials said in interviews.

The sale of additional drones was discussed during at least two meetings between military and diplomatic officials from Russia and Iran in the past month, security officials from NATO and other U.S.-allied countries said. One senior military official briefed on details of the exchanges said Iran had agreed to supply a total of up to 6,000 aircraft, mostly Shahed models of the type used by Russia in attacks on Ukraine’s civilian infrastructure since the summer.

The military official agreed to discuss the matter on the condition that his identity and nationality not be revealed, citing the sensitive nature of intelligence-collection efforts involved. A second official, from a NATO member state, confirmed that Iran had agreed to supply “thousands” of drones. Both officials also confirmed that Iranian ballistic missiles also were acquired by Russia.

Russia has relied increasingly on relatively cheap Iranian attack UAVs to supplement its dwindling stockpile of precision weapons. Drones such as the Shahed-136 - renamed the Geran-2 by Russia - can travel distances of more than 1,000 miles and deliver small payloads of high-explosives in self-detonating attacks against targets.

Iran has acknowledged selling drones to Russia but has claimed that was only before the Ukraine invasion. Multiple reports have found fabrication stamps on drone wreckage that appear to indicate dates of component manufacture that would belie those claims.

The senior military official, citing intelligence intercepts, said Iran agreed to supply designs as well as technical supervision for the planned Russian drone factory, which is expected to be located in the Tatarstan region. Iran is to receive payments of up to $1 billion, in addition to other, still unknown inducements, the official said.

The Washington Post’s Souad Mekhennet contributed to this report.