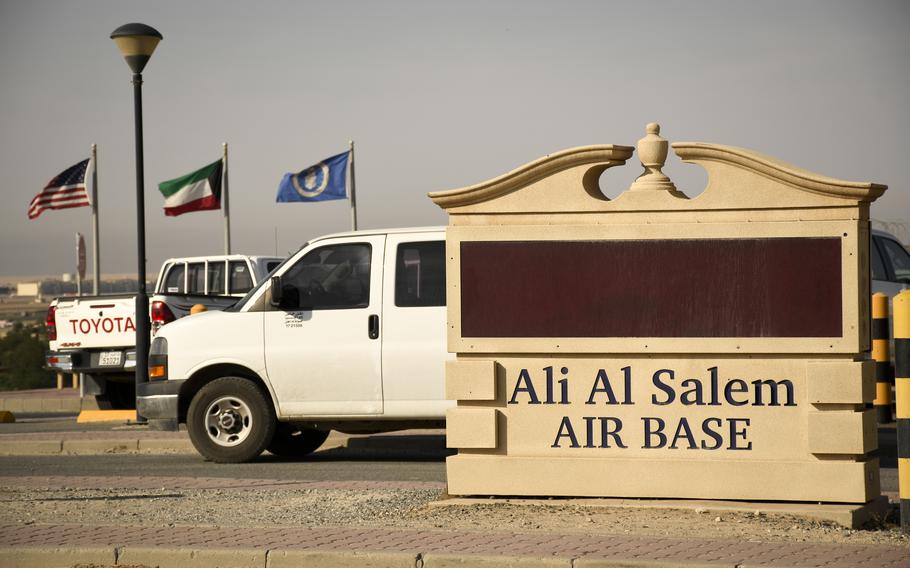 Airmen at Ali Al Salem Air Base in Kuwait are adapting their base to guard against new threats, from aerial drones and ballistic missiles. The base hosts the 386th Air Expeditionary Wing and houses about 3,300 troops on rotation and 1,500 troops in transit, base officials said. (J.P. Lawrence/Stars and Stripes)

“When you see a drone, call security forces immediately,” it says in all caps at the inprocessing building. The base is adapting its air defenses after spending the last two decades sending U.S. forces into danger elsewhere.

The spread of aerial drone technology and advanced ballistic missiles throughout the region means that more places in the Middle East now live under threat.

“With how fast other countries are changing their tactics, we’re needing to change our systems a lot,” Lt. Col. Tito Ruiz, security forces commander for the 386th Air Expeditionary Wing, said in an interview last week.

Iran’s robust drone and missile systems have made an impact in wars in the Middle East and Ukraine, forcing the U.S. and its allies to bolster their air defense systems, analysts and military leaders have said.

Attacks by Iran and its proxies in the region include a missile strike in early 2022 claimed by Houthi rebels that targeted Al Dhafra Air Base, which hosts the U.S. Air Force’s 380th Air Expeditionary Wing. A $2.4 million project at Ali Al Salem Air Base in Kuwait aims to renovate air raid bunkers, base officials said Nov. 28, 2022. The bunkers have a new design with steel doors to seal both ends of the enclosure, which engineers say will lower the impact of blast waves should missiles strike. (J.P. Lawrence/Stars and Stripes) 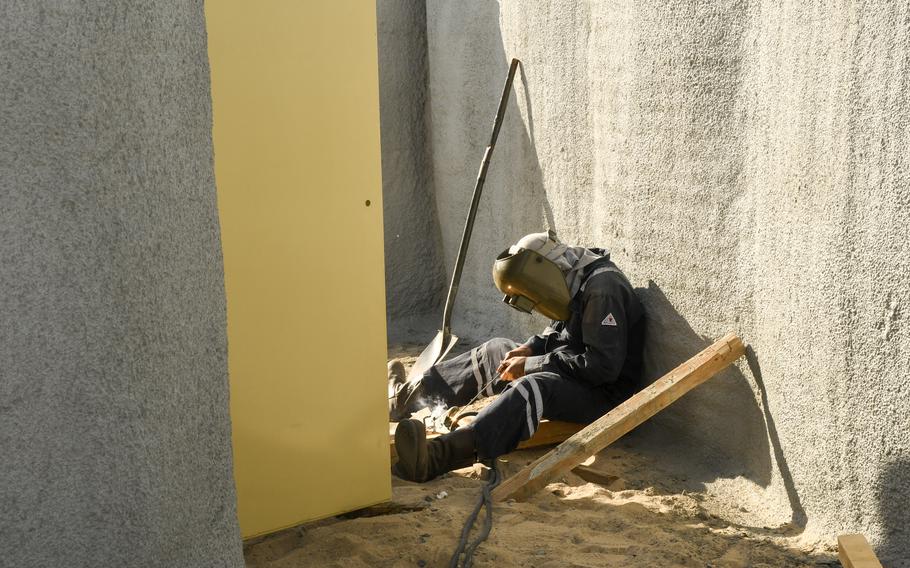 A worker welds a part of a steel blast door that will seal off one end of a renovated bunker at Ali Al Salem Air Base in Kuwait on Nov. 28, 2022. Military engineers designed upgraded bunkers after the Iranian missile strike on Al Asad Air Base on Jan. 8, 2020, led to more than 100 traumatic brain injuries, a statement by the U.S. Army Engineer Research and Development Center said. (J.P. Lawrence/Stars and Stripes) Contracted workers lay cinder blocks as part of a project to build hardened dorms for troops at Ali Al Salem Air Base in Kuwait on Nov. 28, 2022. The dorms will have more protection against missile strikes, base engineers said. (J.P. Lawrence/Stars and Stripes) 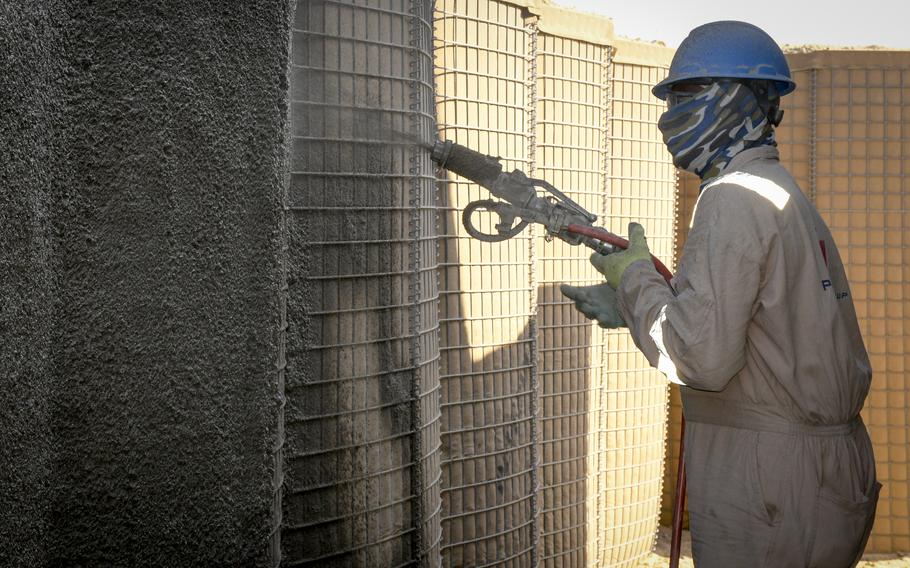 A worker sprays a thick epoxy coating on the walls of a Hesco barrier at Ali Al Salem Air Base in Kuwait on Nov. 28, 2022. The coating is part of a new bunker design and will help prevent the barriers, which are filled with sand, from deteriorating due to the elements, base engineers said. (J.P. Lawrence/Stars and Stripes)

The U.S. military services created different systems to counter the specific drones they faced. These systems don’t communicate with each other well enough, Lt. Gen. Alexus Grynkewich told Stars and Stripes in July, adding that better coordination and technology are needed.

The Army’s systems tend to be better at finding smaller drones, while the Air Force’s sensors are better at detecting larger craft, said Col. Jeffrey “Mumbles” Smith, the wing’s director of intelligence and operations.

Wing leaders said they hope that having one combined building with the Army and the Air Force, as well as Kuwaiti liaisons who have their own systems, can cut down on potential communication breakdowns.

The wing also has an innovation cell to test out new ways of jamming drones and a “red team” to fly unmanned aerial aircraft around the base to test out its defenses, Smith said.

Outside the command post, the threat of aerial warfare is manifested in a new design for the bunkers made of Hesco barriers that are familiar to many veterans of the last 20 years of war in the Middle East.

Iran launched ballistic missiles at some 2,000 troops and contractors at Al Asad Air Base on Jan. 8, 2020. The attack did not lead to any deaths but caused more than 100 traumatic brain injuries.

These injuries were tied to blast waves, which echoed and were amplified throughout the bunkers, according to an August statement by the U.S. Army Engineer Research and Development Center.

Army engineers designed new bunkers for forward bases across the Middle East with steel doors on both ends, which they say will reduce the peak pressures of blast waves from missile strikes by 90%.

Gray epoxy coating was sprayed on the walls of the new bunkers on Nov. 28. Base engineers said that will help prevent the sand-filled Hesco barriers from deteriorating in the elements.

Other work on base includes the construction of cinder block dorms that will have more protection against missile strikes, said 2nd Lt. Joshua Werfel, the base’s construction manager.