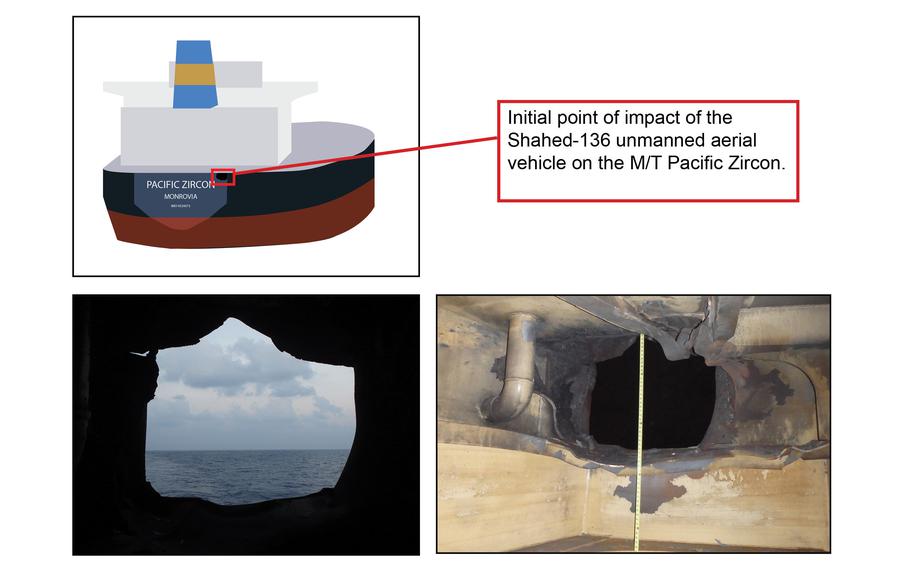 A graphic illustration and photos captured by a U.S. Navy explosive ordnance disposal team aboard M/T Pacific Zircon, Nov. 16, 2022, show the location of what the Navy says is where an Iranian-made drone penetrated M/T Pacific Zircon’s outer hull during an attack Nov. 15. The attack tore a 30-inch-wide hole in the outer hull, just below the main deck. (U.S. Navy)

Debris from an aerial drone attack on a tanker ship in the Middle East points to Iranian involvement, the U.S. Navy’s 5th Fleet said Tuesday.

Navy investigators said the unmanned aircraft used last week against the M/T Pacific Zircon was the same type that Iran has sent to Russia for use in Ukraine, 5th Fleet said in a statement.

The accusation comes as Iran and the U.S. accuse each other of destabilizing the Middle East, which analysts say is locked in a cold war between Tehran and Washington’s partners.

The attack on the M/T Pacific Zircon, a Liberian-flagged commercial tanker, began at about 7:30 p.m. on Nov. 15 in the northern Arabian Sea, the U.S. Navy said.

Photos provided by the Navy show a 30-inch-wide hole torn into the ship’s hull.

The British frigate HMS Lancaster, the destroyer USS The Sullivans and the patrol coastal ship USS Chinook responded to the attack, NAVCENT said. 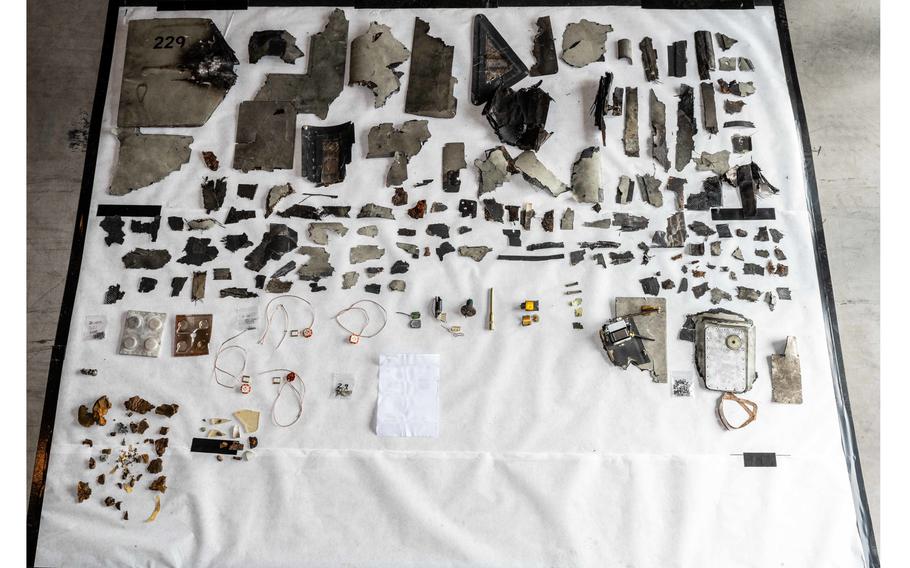 Debris fragments are displayed from what the U.S. Navy says was an Iranian-made Shahed-136 aerial drone collected aboard the M/T Pacific Zircon on Nov. 16, 2022. (Mark Thomas Mahmod/U.S. Navy)

Sailors boarded the tanker Nov. 16 to survey the damage and collect evidence, the statement said.

Two Navy explosive ordnance technicians said they found debris from a Shahed-136 drone and explosives residue. These were sent to a lab at NAVCENT headquarters in Bahrain for testing, the statement said.

The Shahed-136 is a loitering munition drone that has been used by Iran and its proxies across the Middle East. Drones with the Shahed-136’s trademark delta wings have recently been identified in videos showing attacks on cities in Ukraine.

Last week, the U.S. sanctioned Iranian companies it says are involved in the delivery of these aerial drones to Russia, which Moscow has used in attacks against civilian infrastructure in Ukraine.

The U.S. last week also blacklisted more than a dozen companies it says are helping Iran avoid sanctions while selling millions of dollars’ worth of petroleum products, and it added to sanctions on state broadcasters the U.S. says are airing forced confessions from dissidents. Rolling protests continue throughout Iran after the death of a woman in police custody in September. On Monday, Iran’s World Cup soccer team showed its opposition to the state’s violent crackdown on the protesters by refusing to sing the country’s national anthem.

Iranian politicians have blamed the spread of the protests on foreign countries.

U.S.-Iran ties are also strained by stalled negotiations over Tehran’s nuclear program. Iran says its intentions for the program are peaceful, but the regime was censured last week by the International Atomic Energy Agency, the United Nations’ nuclear watchdog, for stonewalling site investigations.