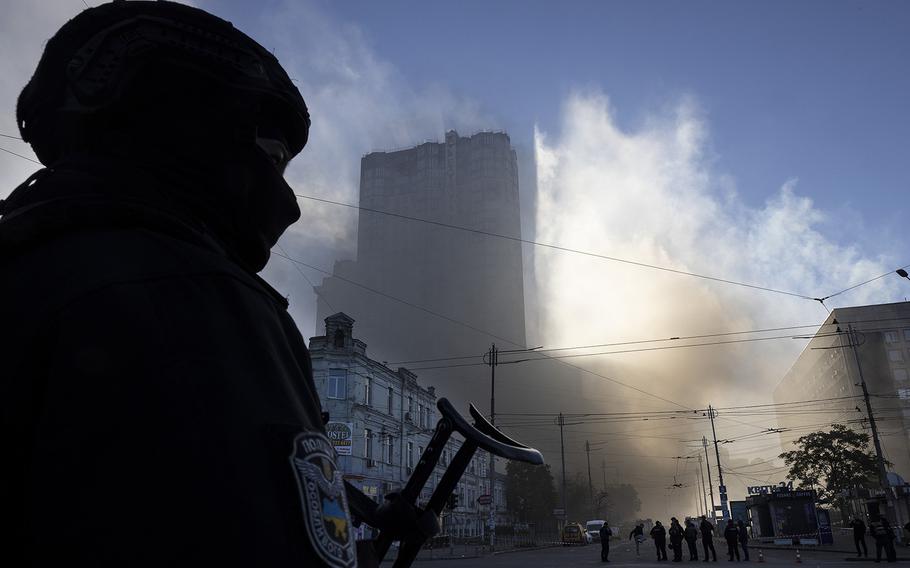 A member of the Ukrainian police force stands guard next to smoke as Kyiv is rocked by explosions during a drone attack in the early morning on Oct. 17, 2022, in Kyiv, Ukraine. The explosions, which authorities reported were caused by “kamikaze drones,” came a week after Russian missile strikes hit across Ukraine. (Paula Bronstein/Getty Images/TNS)

(Tribune News Service) — After months of reluctance, Israel is softening its opposition to providing military aid to Ukraine, as Iran's deepening support for Russia's invasion evolves into a threat to Israeli security.

Gantz also agreed to assess Ukraine's air-defense alert needs, though Israel is declining to provide Ukraine the means to shoot down incoming drones and missiles.

"These are weapons that we have to be prepared to confront — we are the only country in the world that knows how to do that," said Yossi Kuperwasser, a former top Israeli military intelligence official. "Ukraine can be a testing ground for our counter-measures."

While former Prime Minister Benjamin Netanyahu is poised to return to power after winning elections on Nov. 1, an Israeli government led by him won't have significantly different security priorities from the current administration, Kuperwasser said.

In another new development, Israel has begun to share its intelligence, Ukrainian President Volodymyr Zelenskyy said on Oct. 26, welcoming what he called a "positive" trend. "I am pleased with the last few days, we started working," he told reporters, citing information shared by Israel that he said confirmed Ukrainian intelligence.

"The Iranian collaboration with Russia was a big shift for us," Ukraine's ambassador to Israel, Yevgen Korniychuk, said at his country's embassy in Tel Aviv last week. "We'd hoped Israel would choose to be on the right side of the war as a democratic country. But in the end, it happened because we have the same enemy, which is Iran."

Spokespeople for Gantz and the Israeli prime minister's office declined to comment for this story. Russia's foreign ministry and the foreign ministry in Tehran didn't immediately respond to requests for comment. Yuriy Sak, an adviser to the Ukrainian defense minister, said Ukraine needs help as soon as possible to counter Iranian weapons. He said Reznikov had requested air-defense support on the call with Gantz.

Russia in the past few weeks escalated its attacks on Ukraine after suffering a series of battlefield setbacks in its eight-month offensive, unleashing a blitz aimed at knocking out Ukrainian electricity, heating and other infrastructure ahead of the winter months. Ukrainian officials say 40% of the power system has been damaged.

Relying increasingly on Iranian drones as it burns through its own stockpiles of precision-guided missiles, Russia's attacks aim to create enough hardship for the population to persuade Kyiv to sue for peace, Ukrainian officials say.

Iran's Supreme Leader Ayatollah Ali Khamenei has been more equivocal, acknowledging in a speech last month that the world was concerned about Iran selling drones and boasting about them being looked upon as "dangerous."

Remnants of Iranian drones — rebranded Geran-2 by Russia — have been found after being shot down over Ukraine.

Israel has been reluctant to get more involved because of fear that antagonizing Moscow could have direct security implications in the Mideast and for Russian Jews. Israel routinely carries out strikes over Syria in areas where Russia has control over airspace, to stop Iran from supplying its proxies there.

There are an estimated one million Jews living in Russia whose safety is also a concern, especially with Russia-Israel relations at their worst in years. In July, Russian authorities set off alarms in Israel when they asked a Moscow court to liquidate the local offices of the Jewish Agency, which helps Jews emigrate, for alleged violations of Russian law.

But the mass strikes on Ukrainian targets with Iranian drones and expected provision of Iranian ballistic missiles to Russia have changed Israel's calculations, with concern growing that the Ukrainian experience could allow Iran to hone its capacity to attack Israeli cities.

Israel so far has only provided Ukraine with humanitarian assistance and defensive equipment such as helmets and protective vests. For an early-warning system based on Israeli designs, its radar technology and software would have to be used, according to former and current Israeli officials. The sale of such technologies requires export authorization, which is a complex process involving a number of ministries, including the defense ministry.

Russia has informed Israel that it will retaliate if Israeli-made air-defense missiles or other interceptors get to Ukraine, whether directly or via third countries, according to two people with knowledge of Russian policy. Former Russian President Dmitry Medvedev, now a senior security official, warned Israel last month against providing arms to Ukraine, saying that such a step would be "reckless" and "destroy" ties between Russia and Israel.

"The real question is how to do it in a way that isn't provocative for the Russians," Mark Dubowitz, CEO of the Washington-based Foundation for Defense of Democracies, which lobbies for stronger measures to counter Iran, said in an interview in Tel Aviv.

Israel could supply anti-drone and anti-missile equipment to other countries assisting Ukraine, in turn allowing those third countries to provide more of their own arsenals to Kyiv, said Amir Avivi, a former brigadier general in the Israeli army.

"For example if you sell it to Germany and then Germany delivers another set of weapons, it's not Israeli, no problem," he said.

Iran has mostly supplied Russia with the Shahed-136 single-use so-called "suicide drones," which are difficult to detect because they're relatively small and low-flying. Recently upgraded with commercial GPS systems, they can loiter for hours before locking onto a target. Iran delivered 1,000 of them in August, according to the U.S., and plans to deliver 2,400 eventually, Ukraine says.

Drones based on Iranian technology have also been used in attacks on Saudi oil facilities and the United Arab Emirates, as well as in a reconnaissance mission Lebanese militia Hezbollah was attempting over a gas rig in the Mediterranean in July, according to the U.S. and its allies. Israel shot down all three drones approaching the rig.

Ukraine intercepts 70% or more of the drones, but when used in swarms, shooting them down becomes increasingly difficult. Produced at a cost of $20,000 each, according to Western defense experts, the air-defense missiles used to intercept them often cost multiples more. On October 17, an Iranian drone slammed into a four-story apartment block in Kyiv, killing five people.

For Israel, even though its so-called Iron Dome System has a good track record of halting short-range rocket attacks by Palestinian militant groups and the Iranian-allied Hezbollah, the new mass drone tactics used by Iran represent an unprecedented challenge, said Avivi, the ex-general, who now heads an association of former and reserve members of the security forces.

"Imagine 100 suicide drones crossing the Israeli border toward the port of Haifa. As good as our air defense is, it would take 90 out of 100, still 10 will hit. It's a big threat," he said.

A shift in the Ukraine war into a proxy competition between Iranian and Israeli capabilities expands the shadow conflict the two countries have been fighting for years.

"The Iranian weapons have been effective on the ground because they're causing damage and it's also a great way for Iran to show it's working with Russia and isn't isolated," said Dina Esfandiary, an analyst from the International Crisis Group in Brussels.

Tehran has agreed to send surface-to-surface missiles to Russia and, as soon as November, the Fateh-110 and Zolfaghar rockets, which are capable of striking targets from a range of 300 to 700 kilometers (180 to 420 miles), could be in use, Ukrainian military intelligence chief Kyrylo Budanov said in an interview with The War Zone published Oct. 28.

Russia's growing dependence on Iran's military potential in Ukraine is also fanning Israeli concerns that Tehran in return could seek Russian assistance with its nuclear program. Israel rejects Iran's assertions that the nuclear program is for peaceful purposes, and says it will take any steps necessary to prevent Iran from acquiring a bomb.