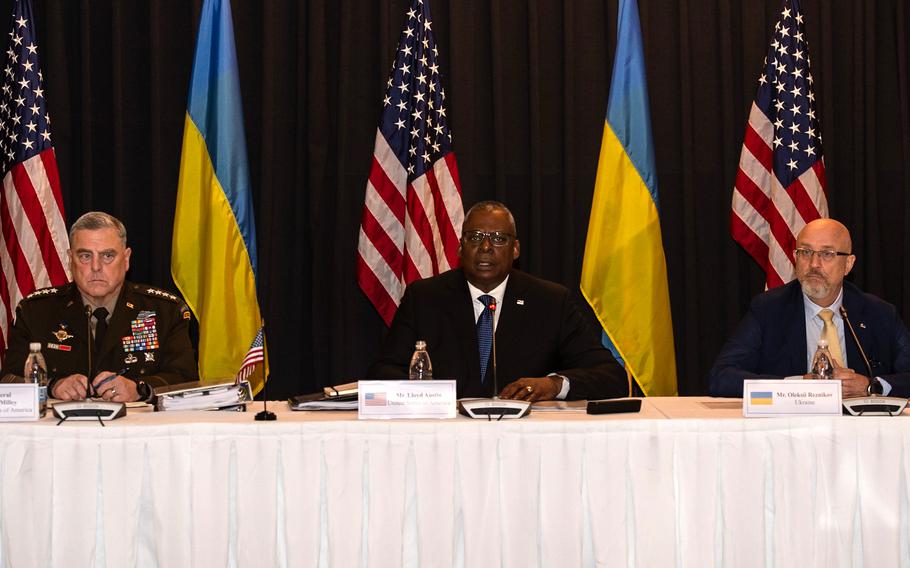 From right, U.S. Army Gen. Mark Milley, the chairman of the Joint Chiefs of Staff; U.S. Defense Secretary Lloyd Austin; and Ukrainian Defense Minister Oleksiy Reznikov give opening remarks to reporters in September at Ramstein Air Base in Germany. The base will host its third Ukraine Defense Contact Group later this month, according to U.S. military and German defense officials. (Alexander Riedel/Stars and Stripes)

KAISERSLAUTERN, Germany — Ramstein Air Base will host its third meeting of the Ukraine Defense Contact Group later this month, according to U.S. and German officials.

Headed by U.S. Defense Secretary Lloyd Austin, the group of leaders from dozens of nations has convened eight times at various locations and virtually since late February, when Russia launched its full-scale invasion of Ukraine.

A spokesman for U.S. Air Forces in Europe-Air Forces Africa confirmed the meeting details Monday but declined to say how many countries will be part of the next contact group session.

The Russia-Ukraine war has been raging for more than 300 days, with no end in sight. Discussions at meetings of the group are focused on how to enhance the military capabilities of Ukrainian forces.

Germany has pledged to provide Ukraine with up to 40 Marder infantry fighting vehicles from industry and German military stocks, Lambrecht said.

In addition, Germany will deliver a Patriot fire unit with ammunition to help Ukraine defend against the recent barrage of Russian airstrikes targeting cities, she said.

The next contact group meeting comes on the heels of the White House announcement Friday of $3 billion in weapons and other aid, the largest package of U.S. military assistance for Ukraine to date.

Some American and European leaders have expressed concern that U.S. support for Ukraine may be reduced now that the Republicans control the House of Representatives.

A handful of GOP lawmakers have questioned support for Ukraine amid domestic problems, such as inflation and illegal immigration.