The Russian frigate Admiral Makarov in the Mediterranean Sea in 2020. The Black Sea Fleet flagship and at least one other ship may have been significantly damaged in a Ukrainian drone attack, CNN reported Oct. 31, citing unidentified U.S. and Russian sources. (Russian Defense Ministry)

Ukraine’s recent attack in Crimea on Russia’s Black Sea Fleet in port reveals glimpses of how the war with Moscow could develop if Kyiv makes a concerted push to retake the peninsula, naval analysts said.

The early morning drone offensive Oct. 29 also provides lessons for the U.S. Navy and its allies as they build future strategies for bases and shipyards, where billion-dollar assets will need protection from such attacks.

Details about the effectiveness of the aerial and surface strikes on ships in Sevastopol Bay remain under wraps, as do the defenses Russia employed against them.

But the frigate Admiral Makarov, which replaced the sunken Moskva as Black Sea Fleet flagship, and at least one other vessel may have been significantly damaged, CNN reported Oct. 31, citing unidentified U.S. and Russian sources.

The Ukrainians appear to be testing what works against the Russians, and success here could mean greater willingness to go on offense at sea, said Alessio Patalano, a senior lecturer in war studies at King’s College London.

The recent attack may come to represent “a fundamental shift in sea denial intended as a purely defensive measure” into a more active, attacking strategy of denying Russia effective use of the seas, Patalano said.

Sea denial wouldn’t give Ukraine maritime control but would hinder Russian reinforcement of the Crimean Peninsula, which was illegally annexed by Russia in 2014.

“For Crimea to go, the Russians cannot be feeling like they can move troops and assets around using the (backside) of that theater,” Patalano said. 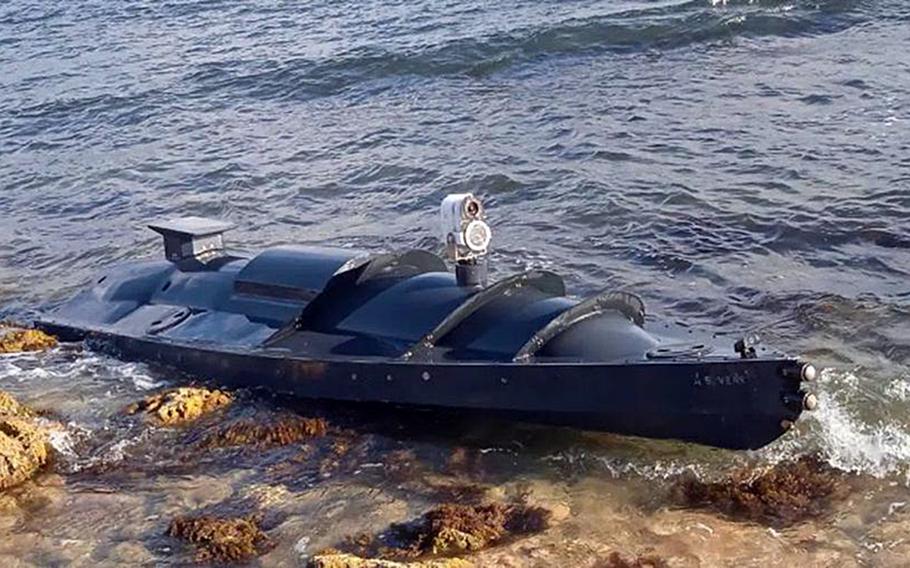 A drone vessel roughly the size of a kayak reportedly washed ashore on the Crimean Peninsula coast close to Russia's main naval base near Sevastopol in September. About a month later, Ukraine attacked Russia's Black Sea Fleet in port using aerial and surface drones. (Twitter)

Early on Oct. 29, the chief executive of the Crimean city of Sevastopol, Mikhail Razvozhayev, posted on the social media site Telegram that the city was under siege by several aerial and surface drones, the Russian news agency Tass reported the same day.

Razvozhayev later said that no city facilities were hit and that all was calm.

Ukraine has not publicly talked about the operation. However, Russia called the action a terrorist attack and suspended its participation in an agreement allowing export of Ukrainian grain in the Black Sea.

The Russians said Wednesday, however, that they will return to the agreement, The New York Times reported the same day.

Observers point out that the technique of attacking ships in port, along the coast or at a chokepoint such as a strait with a manned or unmanned boat filled with explosives is a well-worn maritime strategy.

For example, an attack on a Saudi frigate in the Red Sea in 2017 by Houthi rebels was carried out by an unmanned, remote-controlled boat, the U.S. Navy told Defense News at the time.

Ukraine’s attack on Russian military assets and facilities in Crimea follows a strike on an airfield north of Sevastopol in August and the bombing of a bridge in early October that connects the peninsula to mainland Russia, noted Bryan Clark, director of the Hudson Institute’s Center for Defense Concepts and Technology.

Those efforts force the Russians to collapse their lines or fortify their defenses in Crimea, taking troops and units away from other fronts, he said.

“The other part of it, though, is to start softening up the Russian defenses on Crimea in preparation for some later operation,” Clark said. “There are a couple of things at play here in terms of Ukraine’s actions against Crimea itself.”

It’s likely that Ukraine would launch a similar destabilizing attack if the opportunity arose, but it’s unclear how Russia would respond, he said. Having been burned already, the Russians likely will fortify the port.

The attacks also serve to bolster the image of Ukraine’s battlefield prowess and ability to maintain the fight as the war moves into the winter months, when international support may falter, Clark and other analysts say.

“(The drone attack also) drives home the point to the West that there is a maritime component of this conflict and one where naval drones play a significant role,” said Sebastian Bruns, a 2022 Fulbright scholar in residence at the U.S. Naval Academy and maritime expert at the Center for Strategic and International Studies.

The takeaway for the U.S. Navy and its NATO allies may be to rethink defense where they believe they are the safest, particularly in the North Atlantic or the Mediterranean Sea, Patalano said.

There also is the need for the U.S. and the West to better explore how aerial, surface and underwater drones can enhance existing assets, Patalano and Bruns said.

“All you need in this scenario is an armed vehicle that looks very much like it’s commercial off the shelf … that’s paired with innovation and maybe ingenuity to create some real problems for a fleet,” Bruns said.