Why Putin will fight for Kherson: Fresh water and land bridge to Crimea 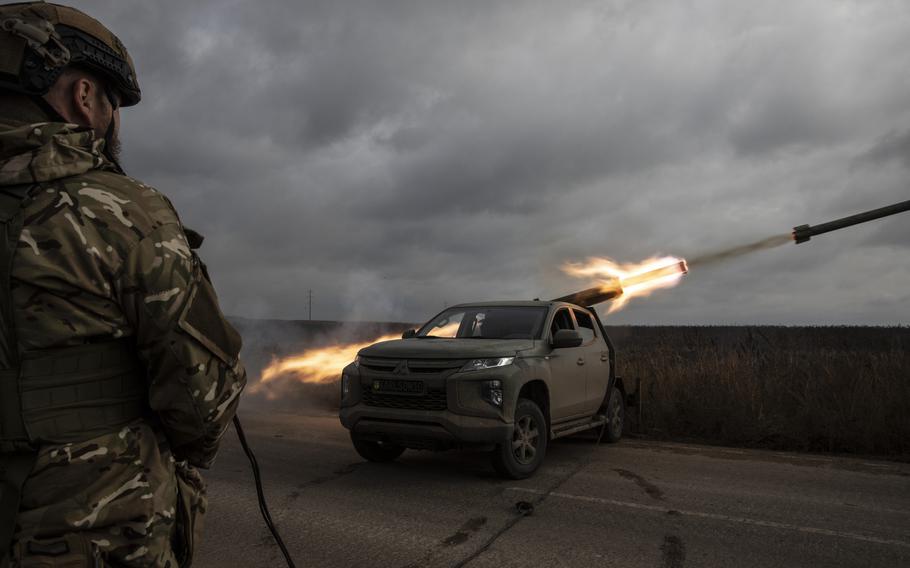 Soldiers in Ukraine's Karlson unit fire a Grad rocket at a Russian position in the Kherson region of southern Ukraine on Oct. 27, 2022. (Heidi Levine/for The Washington Post)

KHERSON REGION, Ukraine — Here in the muddy coastal region of Kherson, which sits like a crumpled hat atop the Russian-occupied Crimean Peninsula, soldiers are readying for what may become the biggest battle of President Vladimir Putin’s war in Ukraine, and perhaps the single best test of whether Moscow ends up winning any significant territory from its invasion or is forced to retreat empty-handed.

Ukrainian officials have signaled that an assault on Kherson city — the only regional capital that Russia has managed to capture since its invasion began Feb. 24 — could be imminent. President Volodymyr Zelenskyy told Ukrainians to “expect good news” from the region, and another top official recently said he expects to retake the city by the end of the year.

Russia, however, has shown no indication that it is willing to give up the city, or the broader Kherson region, which carries enormous strategic and political importance for the Kremlin.

The Ukrainian armed forces said last week that Russia had moved an additional 1,000 troops into the area around Kherson city, which had a prewar population of roughly 300,000.

On a recent day here in the region, a Ukrainian rocket team worked quickly, with one mud-splattered truck racing to the edge of a contested town to put up a reconnaissance drone and another hanging back to take aim.

With a chest-rattling whoosh, three Soviet-era Grad rockets tore off the back of the vehicle and into the sky.

The target was a Russian vehicle-repair depot near the town of Dudchany. It was difficult to determine the damage from the strike last week — the second in three days.

Ukrainian soldiers, from a volunteer unit called Karlson, had been in the area for a few weeks. What they had hoped would be a swift march toward the occupied city of Kherson has been delayed by Russian fortifications and by another adversary: the ferocious autumn mud.

“The Russians have very good, well-prepared positions in this area so it’s difficult to push them out,” said Karlson’s commander, who goes by the call sign Playboy. “For now, they are staying put.”

“Even if you shoot accurately with artillery, you might kill some Russian soldiers, but other ones just come back to these positions,” Playboy said. “To move forward we need a lot of tanks, [armored personnel carriers] and human resources.” The Karlson unit’s commander, who goes by the call sign Playboy, wrote messages including “Burn in hell,” “Ukraine is the only one” and “For the holy future of Ukraine” on ammunition on Oct. 27, 2022. (Heidi Levine/for The Washington Post)

Amid signs in late summer that Ukraine was planning a major counteroffensive into Kherson, Russia shifted military units to the south, contributing to the swift success of another Ukrainian offensive in the Kharkiv region in the northeast. But Ukraine’s push south has been slow, and it has come with heavy casualties.

Efforts to liberate towns in Kherson have slowed further in recent days, as autumn rains have already made the ground muddy. And Russian defenses don’t appear to be collapsing like they did when Ukrainian forces roared through Kharkiv in September.

The Kherson region forms the last crucial component of the “land bridge” from mainland Russia to Crimea that Putin has coveted ever since Moscow invaded the peninsula and annexed it illegally in 2014. And the inability to reach Crimea by road was a main reason Putin spent $4 billion to build the Crimean Bridge across the Kerch Strait.

In February when Putin ordered a full-scale invasion, Russian forces in Crimea flowed into southern Ukraine via Kherson.

Now the city remains Moscow’s only major foothold on the western side of the Dnieper River. Should it fall, Ukrainian forces could push on, potentially surrounding Russian forces.

In early October, Ukrainian troops were advancing on Kherson city from the north and west. Russian-installed officials say they have removed as many as 70,000 civilians and administrative offices to the eastern side of the Dnieper ahead of an expected Ukrainian assault.

But rather than abandoning the city, the Russians appear to be reinforcing their positions and preparing for the big battle ahead, though no one knows if it will happen before or after winter. Soldiers in the Karlson unit carry a rocket that they later fired at a Russian position in the Kherson region on Oct. 27, 2022. (Heidi Levine/for The Washington Post)

As the showdown looms, conditions in Kherson city continue to deteriorate. People who have fled the capital say lines of communication have all but been severed. Even the Russian SIM cards that many Kherson residents began using in their cellphones after the Russians invaded in early March often no longer work.

“It wasn’t possible to survive under the conditions of the occupation,” said Tetiana Kartanovych, 51, a teacher who fled Kherson city a month ago and is now in Kyiv.

Initially, the occupation was orderly, Kartanovych said. There were few checkpoints, and the Russian soldiers were reasonably professional. But over time, the Russians began to “terrorize” people, rummaging through their cars and forcing men, boys and, occasionally, women to strip so they could check for tattoos suggesting sympathies with the Ukrainian army.

Soon, Kartanovych started to see soldiers drag people off public transport and take them away, she said.

Her husband and twin 17-year-old sons crossed to the east side of the river in the hope that there would be less harassment, she said.

Instead, Russians stormed the house where they were staying and forced everyone onto the ground at gunpoint. They beat her husband until his ribs broke and put a gun to one of the twin’s head while they searched the house, Kartanovych said. Her husband was detained for two days before being released. Her story, which could not be quickly and independently verified, aligns with reports from Kherson city and other places under Russian occupation.

Kartanovych said she now worries about her elderly mother, who remained behind. Communication is difficult, and water and electricity service are intermittent, she said. Some people have money on bank cards but cannot use them, while cash is almost impossible to find.

Zelenskyy has vowed to liberate Kherson and then push on into Crimea, a red line for Putin, who has warned repeatedly against any military action to retake the peninsula.

Also located in Kherson is a crucial Soviet-era canal, which long provided a vital supply of fresh water to Crimea. Ukraine blocked it in 2014, costing Moscow hundreds of millions of dollars. One of Russia’s first moves after the start of the invasion in February was to seize the canal and renew water flows.

The Kakhovka dam and hydroelectric power plant has become a key talking point in recent weeks, with Zelenskyy claiming “Russian terrorists” are planning to destroy it. Russian officials have accused Ukraine of plotting to do the same, but neither side has provided evidence.

Whatever lies ahead in Kherson, it will probably take a while to unfold.

The front line has not moved much in the past three weeks, according to a half-dozen Karlson soldiers. The volunteer unit began in the war’s early days as an aerial reconnaissance outfit that used various types of drones to identify targets for other Ukrainian forces to attack. It’s named after a Swedish cartoon character popular in Ukraine who has a propeller on his back.

“The cartoon character is quite fitting for our work,” Playboy said, pointing to his Karlson patch. He and many men in the unit were friends in the central Ukrainian city of Dnipro before the war. None had military experience. Playboy produced fertilizer. Another ran a sports nutrition business. One was a professional martial arts fighter.

With a combination of debt and donations, Karlson gradually assembled its own small arsenal, including three trucks capable of firing Grads. The Soviet-era rockets had been left behind by Russian soldiers during a withdrawal, Playboy said.

Playboy and a drone pilot with the call sign John drove into Dudchany to monitor the damage caused by the rockets, which could be aimed before launch but could not be guided midflight.

A tall soldier in a bucket hat nicknamed Borsuk stayed behind to launch the Grads from the back of another truck, which he quickly turned around before retreating to avoid a retaliatory strike. His haste was another sign of Russia’s capabilities in this region.

“We leave in seconds,” Playboy said. “It’s the most important thing because in this area, the Russians have radar. They will quickly know the position [from which] we are shooting.”

The 60-person unit had suffered three casualties: a friend of Playboy’s was killed in an artillery strike this summer, and two others were seriously wounded by an antitank mine when Ukrainian forces entered this area in early October.

Heavy rains have made it harder to move large vehicles, like armored personnel carriers and tanks, he said. Even their four-wheel-drive trucks were coated in muck. But the men said they believed a move to recapture Kherson city before winter was still likelier than not.

The Washington Post’s Anastacia Galouchka contributed to this report. Damaged vehicles in the Kherson region on Oct. 9, 2022. (Heidi Levine/for The Washington Post)