Most Germans say no to military leadership role in Europe, poll finds 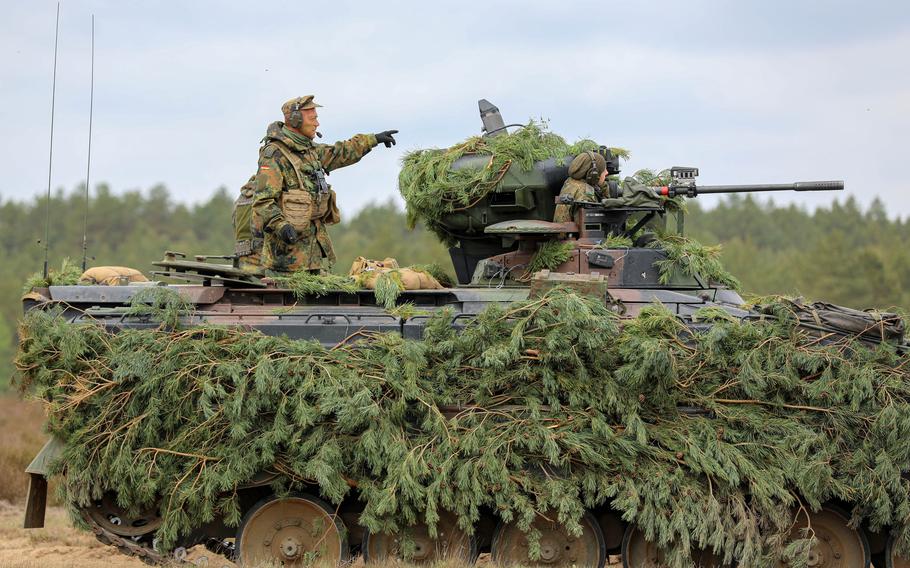 German soldiers advance during a field training exercise with NATO allies at Mielno Range, Poland, on May 14, 2022. A poll released Oct. 17, 2022, found that the bulk of respondents oppose a military leadership role for Germany in Europe. (Tara Fajardo Arteaga/U.S. Army National Guard)

A majority of Germans don’t consider Russia a significant military threat to Germany, oppose a military leadership role in Europe for their country and prefer restraint on the world stage, according to a new public opinion poll.

The findings, released Tuesday during a forum in Berlin hosted by the Koerber Institute, showcase how little Russia’s war on Ukraine has done to nudge many Germans out of a long-standing ambivalence about security matters.

“Our security is fragile ... Peace does not fall from the sky,” said German Foreign Minister Annalena Baerbock, who struggled to explain the mixed public views over Germany’s role in the world.

The findings come at a time when the U.S. is aiming to maintain unity in support of allied efforts to deliver weaponry and other support to Ukraine. In Berlin, some officials said German mixed messages have raised doubts about Berlin’s resolve if Russia posed a threat to allies, such as those in the Baltics.

“Can we trust Germany?” Latvian Defense Minister Artis Pabriks asked during the forum. “We are ready to die. Are you?”

Regarding Russia, 22% of German respondents described the threat it poses as “significant” compared with 50% who classified the country as a “minor” military danger, according to the Koerber poll. 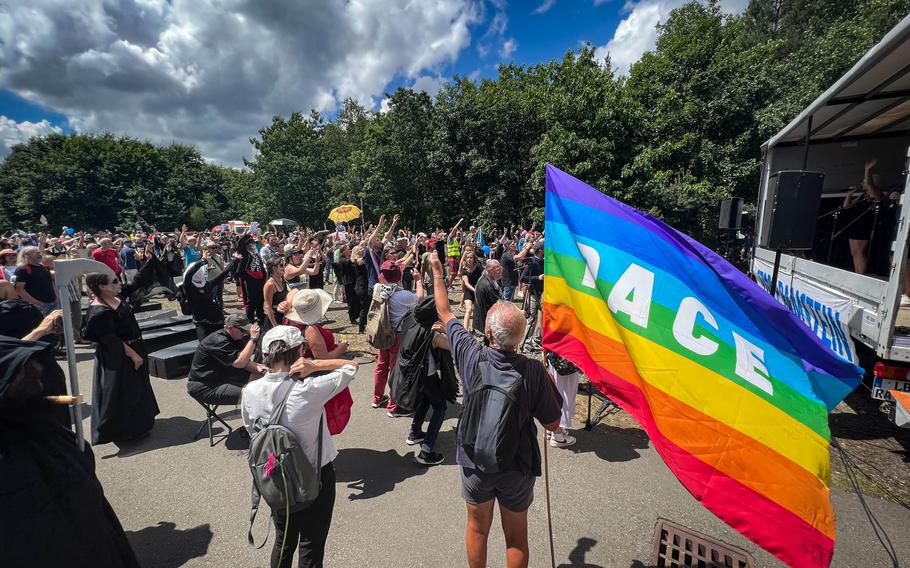 Protesters listen to anti-war songs during a demonstration in Ramstein-Miesenbach, Germany, on June 25, 2022. A new public opinion poll released Oct. 17, 2022, found that a majority of Germans don’t consider Russia a significant military threat, oppose a military leadership role for Germany in Europe and prefer restraint from Berlin in international crises. (Alexander Riedel/Stars and Strip)

Meanwhile, 25% said Russia poses no military threat at all even as Europe faces the largest conflict on the Continent since World War II because of Russia’s Ukraine invasion.

The German survey was conducted in August and involved 1,088 adults.

Baerbock was among the officials speaking at the Berlin event, which coincided with the release of the foundation’s latest polling on German attitudes about security. She described solidarity among NATO allies as “our life insurance.”

While Germany’s status as Europe’s economic powerhouse is firmly established, 68% of the public don’t want the country to play a military leadership role on the Continent, the Koerber poll found.

Meanwhile, on the question of whether Germany should become more strongly involved in international crises, 52% said they would prefer “restraint” over engagement.

German hesitancy on such issues is frequently attributed to a history that includes two world wars and the disastrous outcomes that resulted.

Critics, however, have complained that Germany needs to shake off its history and share more of the security burden.

It has long fallen short of the NATO benchmark that calls for 2% of GDP to be dedicated to defense spending. Germany also has faced criticism for lagging behind numerous other allies in delivering military support to Ukraine.

Germany’s dependence on Russian gas despite years of warnings from the U.S. and other allies about the dangers also has been a contentious point.

Still, there were some indications that Germans see a need for shoring up national defense, as 60% of those surveyed favor higher military spending for the long term, the poll showed.

And 74% of those surveyed said the German military should be used to defend allies. That’s an large uptick in support compared to various polls in recent years.

For example, a 2020 Pew survey found that 60% of Germans opposed using force to come to a NATO member’s defense, undercutting the alliance pledge that an attack on one member is tantamount to an attack on all.