A family waits with their pet rabbit by their car among a convoy of other cars that have traveled from Russian controlled territory to a staging area controlled by Ukraine on the outskirts of the village of Kamiyanske on Aug. 27, 2022. (Heidi Levine/for The Washington Post)

KAMIYANSKE, Ukraine — Oleksander hates pulling into this abandoned Ukrainian village on the Dnieper River, one of the only portals into Russian-occupied territories to the east. When he passes the last Ukrainian flag, flapping next to a bombed-out gas station, he knows that he’s about to encounter the first Russian checkpoint and that the soldiers will question him, check his phone for anti-Russian memes and examine his body for military tattoos.

Sometimes they threaten to shoot him.

“This car has been hit three times,” he said, pointing out the patch of tape over a shrapnel hole in the door of his tattered white Ford Transit van. “Nothing good happens when you get [inside Russian-controlled territory]. My smile fades as soon I go in this direction.”

Oleksander — whom The Washington Post is identifying only by his first name to protect him from Russian scrutiny — is one of the few Ukrainians who spend time on both sides of the line separating enemy armies. He is among just a handful of couriers willing to cross the militarized armored curtain, passing back-and-forth through this carefully controlled no man’s land with tense cooperation from troops on both sides. 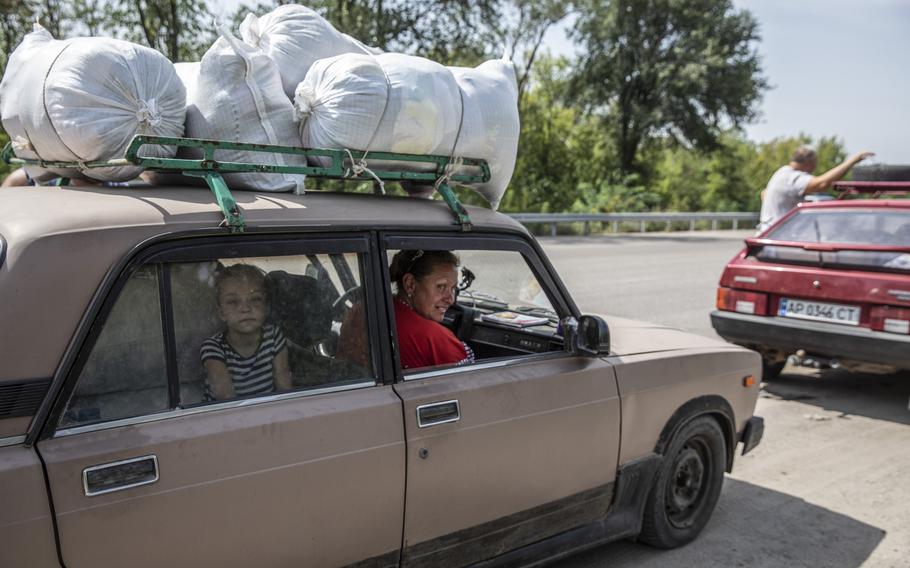 Sasha Shamlee, 7, looks out of the car window as she waits with her family in a convoy that arrived to Ukrainian-held territory outside the village of Kamiyanske, Ukraine, on Aug. 27, 2022. (Heidi Levine) 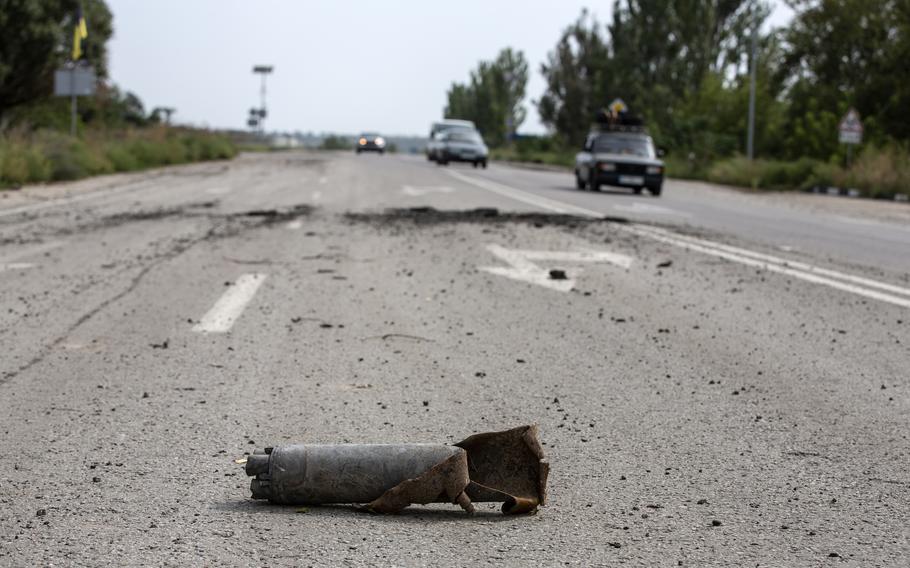 The two-lane road outside the village of Kamiyanske, Ukraine, on August 27, 2022. Convoys of cars travel in both directions in and out of Ukrainian and Russian held territory. (Heidi Levine/for The Washington Post)

Making the trip two or three times a month, they dodge shell craters on this battered two-lane road and navigate the military bureaucracies of two armies. Typically, their runs bring families out of the occupied areas and bring food, mail, prescriptions and, inevitably, toilet paper for the people living under enemy control.

“It’s hard to find toilet paper, and the price has doubled,” said Serhii, another driver who regularly makes the trip between his apartment near Mariupol, which is in Russian hands, and the city of Zaporizhzhia in free Ukraine.

Like Oleksander, Serhii is not being identified by his full name. Although his crossings have gotten easier in recent months — he estimates he has made the trip at least a hundred times since Mariupol fell to the Russians — he still feels a chill when he remembers the time Russian soldiers pulled him at rifle point from his van. The trips may have become more routine as some of the Russians have come to recognize him, but the danger is always there.

“When guys with guns don’t like you, they get ugly,” he said. “My wife worries about me every minute that I’m gone.”

The Russians sometimes make him dump fresh tomatoes and other produce he is trying to bring out for farmers on the other side. And lately, they have been turning away vans bringing consumer goods into Russian-held areas.

“They do anything they want, any time,” said Rafik Sultanov, another driver who had been turned away that morning with a van full of toilet paper and laundry detergent donated by aid groups. “We are at their mercy.” 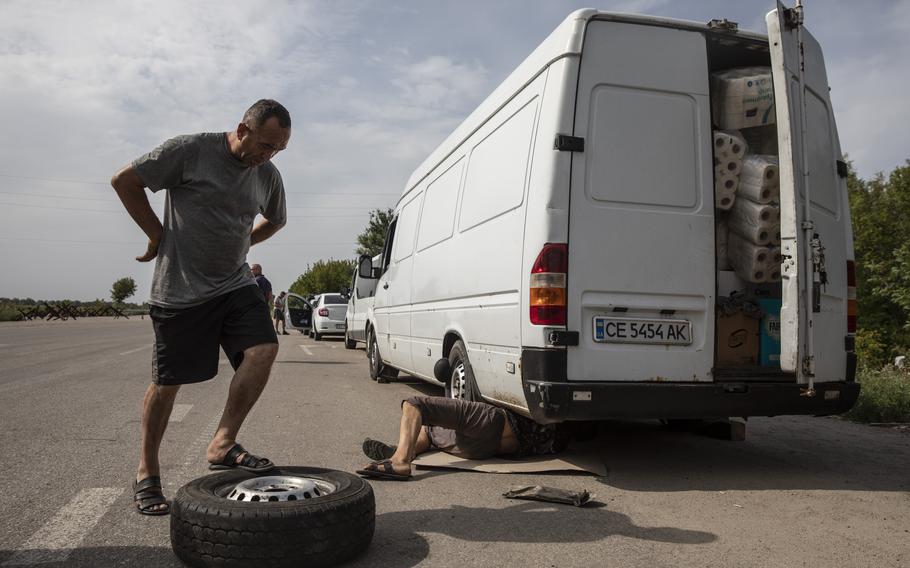 Rafik Sultanov, 53 , waits for a flat tired to be repaired on his van full of supplies on the outskirts of the village of Kamiyanske, Ukraine, on Aug. 27, 2022. (Heidi Levine/for The Washington Post)

All of the drivers were at a staging area on the Ukrainian-controlled side of Kamiyanske on Saturday, waiting for permission from Ukrainian officials to carry on to the parking lot in Zaporizhzhia, where the families they had brought out would look for rides to Dnipro, Kyiv or wherever they hoped to find shelter.

This small, war-ravaged outpost is one of the only legal crossing points along the 1,500-mile front line separating Ukrainian and Russian forces. The area is off limits to the public because of frequent shelling, illustrated by a rocket fuselage embedded in the pavement near the village center. The Post was allowed to make a brief visit to the village, where neither side maintains a troop presence, with permission from Ukrainian officials.

Most of those crossing here are families fleeing from areas held by the invading Russian forces. In all, more than 306,000 Ukrainians have fled occupied territories, according to government officials, through this and other crossing points when they were operating.

At this last remaining gateway, traffic has spiked in recent weeks, even though travelers sometimes have to sleep in their vehicles for up to a week before getting permission to pass through the string of Russian checkpoints leading to this demilitarized zone with Kamiyanske at its center.

Thousands of families have poured out of the Russian side as fighting has raged around the nearby Zaporizhzhia nuclear power plant under Russian control, raising the specter of a cataclysm at Europe’s largest atomic energy facility.

But an increasing number of families are heading the other way. The Kassimya family from Melitopol as they wait in their vehicle for Ukrainian police to escort them after they arrived in a convoy with others to a staging area on the outskirts of the village of Kamiyanske, Ukraine, on Aug. 27, 2022. (Heidi Levine/for The Washington Post)

As vehicles bound for Ukrainian-held territory waited on one side of the road, a loose convoy of vans and cars rushed by in the other direction, all heading into the rolling Russian-controlled fields visible beyond the village. Within minutes, they would be in enemy hands.

Some of the vehicles were frequent crossers like Serhii and Oleksander. But many were families who had fled previously and were now ready to take their chances under Russian rule to reclaim their houses and property.

“Everything we own is there,” said Kateryna, who fled the embattled city of Lysychansk on April 5 when Russian shelling caused a fire on her block. “We had to leave with nothing, we were barefoot, and now winter is coming. Everything we have is in Lysychansk.”

Kateryna, who is not being fully identified for her safety, was among hundreds of Ukrainians waiting in an unpaved parking lot on the Ukrainian side of the village for permission to leave for the Russian-held side.

She and the others who were paying about $150 for a circuitous trip in a van to Lysychansk through Russian-held areas had been waiting at this registration point for about 24 hours. Others had been camping in the spot for more than five days.

Oleksander has been stuck frequently, too, waiting for permission to continue. But for him, any delay has the benefit of giving him more time with his family. They long ago evacuated from his hometown of Berestove inside Russian-held territory. He waits with them at an apartment in Dnipro, just over an hour away, until he gets a phone call telling him he can begin his run back into Russian-controlled territory.

Typically, he loads his van with donated goods that have become scarce or unaffordable in Russian-occupied areas — sugar, pasta, toilet paper, diapers. The exiled leadership of his town also sends packages for citizens back home, giving Oleksander phone numbers to call for pickup when he arrives. He collects parcels and mail on request, and shops for the spare carburetor and shocks that someone needs at home.

He feels useful, but he hates going back under Russian control, he said, where soldiers demand to see passports. Sometimes those who object disappear. He would leave the occupied area, except he knows the Russians would take over his apartment. And his mother, who is in a wheelchair, is too old to move.

“She would never make it this far,” he said in the bright roadside sun of the village that serves as an airlock between warring factions.

And so he plies back and forth, dividing his time between the parts of Ukraine controlled by Ukrainians and the parts controlled by the enemy. But saving his smile for one side only. The Pestereva family from Mariupol as they eat lunch by the tent they have been staying in on the outskirts of the village of Kamiyanske, Ukraine on Aug. 27, 2022. The family fled their home in Russian-held Mariupol on April 5 but now want to return. (Heidi Levine/for The Washington Post)