The story of little Liza, killed in her stroller by a Russian missile 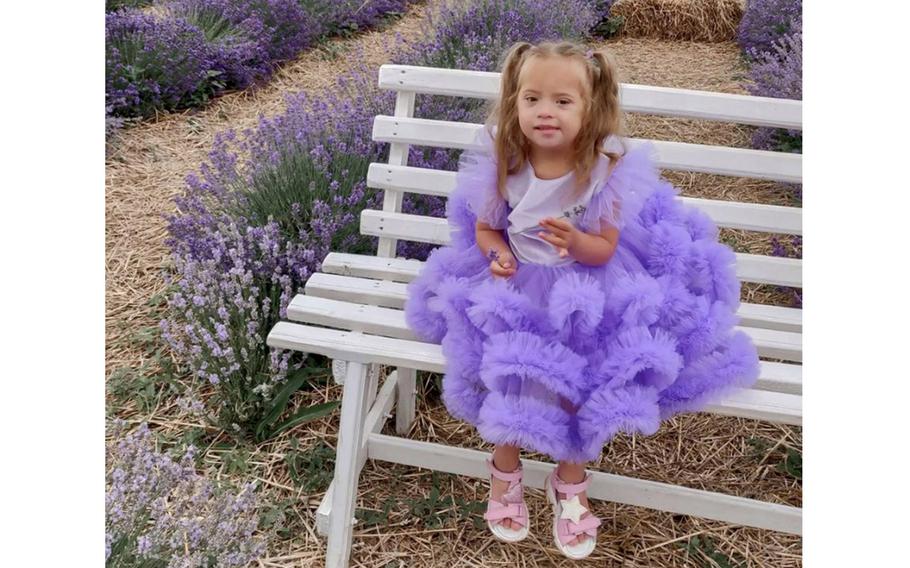 Elizaveta Dmytrieva in a lavender field. (Courtesy of Iryna Dmytrieva)

Four-year-old Elizaveta Dmytrieva grinned as she pushed her stroller along the street in Vinnytsia, Ukraine. It was nearly five months into the war, but the city where her family had fled from Kyiv seemed safe enough. Her mother took an Instagram video as “Liza,” who was born with Down syndrome, led the way in a moment of delighted independence.

Barely an hour later, the little girl was dead, her mother severely injured. And the image of her black and pink stroller, flipped on its side and spattered with blood, would become symbolic of the gruesome toll Russia’s invasion has inflicted on even the youngest Ukrainians.

What Iryna Dmytrieva remembers, reliving the horror of that July morning in her first interview since leaving the hospital, is a deafening noise overhead that she thought was a plane. She looked up to see a “massive” missile and immediately crouched down to try to shield her child.

“There wasn’t time to do anything,” Iryna told The Washington Post. “It was over in a flash.”

As her injuries slowly heal, she keeps replaying those final moments with Liza. The two were going from one appointment to another, and Iryna is thankful she had securely strapped her daughter into the stroller at that point because they were rushing. Otherwise, she says, “who knows where she would have ended up?”

Her decision meant the family had an intact body they could grieve and bury — unlike the many other bodies blown apart that day.

“She was my life,” Iryna said of Liza. “What Russia took from me cannot be forgiven. All my plans are destroyed.”

Iryna was 14 weeks pregnant when doctors told her and her husband, Artem, that there were complications. Their child would be born with a heart defect and other problems; terminating the pregnancy would be best, the doctors advised. The couple said no.

Two months after Liza’s birth, a genetic test revealed she had Down syndrome — a chromosomal condition that commonly causes physical and intellectual disabilities. Five months later, she underwent heart surgery that lasted more than five hours. Her mother shared photos on social media throughout Liza’s hospitalization, and those images were how many others came to know the little girl.

Throughout Liza’s short life, Iryna used Instagram to shine a light on the struggles, hopes and fears of parenting a child with Down syndrome. The account became an online diary, which also documented her split from Artem. The couple separated when Liza was 2.

“It was the only kind of motherhood I knew,” Iryna said, describing the many medical appointments that became a regular part of life. Each night, before Liza fell asleep, she would remind her: “You’re my most clever, beautiful, ideal child.” 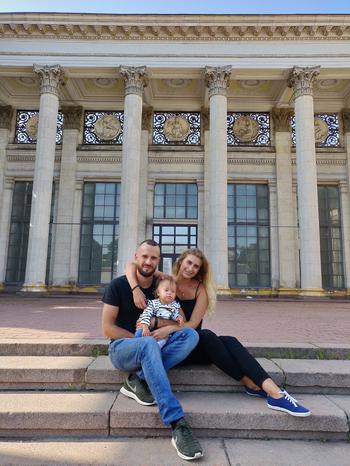 Liza as a toddler with her mother, Iryna, and father, Artem. (Courtesy of Iryna Dmytrieva)

The photos tell a story of love through all seasons. There’s Liza dressed as a witch for Halloween. Liza wearing a sun hat at the beach. Liza lying on a bed of fresh white snow.

In one video, she runs through a field of lavender and spins around in a lilac dress. It was the beloved family dog, a chubby pug named Ben, who showed her how to twirl in circles.

“Is it possible to fall in love again and again?” her mother wrote under a photo just weeks before Liza was killed.

The July 14 strike on Vinnytsia claimed 23 lives in all, including those of two other young children. The Russian missiles that hit the central Ukrainian city, far from the front lines, also damaged a nine-story office block, restaurants and residential buildings.

Amid the dark, thick smoke, Iryna knew almost immediately that Liza was gone. She saw her still buckled in the stroller. Her daughter’s feet, clad in mint-green-and-white sneakers, were splayed at an unnatural angle. Next to the stroller was a severed human foot — someone else’s.

Iryna remembers screaming for help. No one responded.

The mother was taken in critical condition to Vinnytsia City Clinical Hospital, where she would spend a month. Doctors removed shrapnel from her stomach, including a piece lodged just centimeters from a vital artery. Her left leg was shattered. Surgery on her left arm removed a fragment from the projectile. She has yet to regain feeling in some of her fingers.

From her hospital bed, Iryna told her mother that she wanted Liza to be buried in a white dress — “like a princess,” she said. And three days after the attack, photos show the little girl lying with a flower crown on her head and some of her favorite toys crowded at her feet in the open casket. Among them was a treasured mouse that went everywhere with her.

Those images from the funeral, which Iryna could not attend because of the severity of her injuries, are ones she tries not to look at because she feels as though her daughter is still with her.

“The mental pain is worse than the physical pain,” she said.

She is 34 and, like other parents in Ukraine, struggling with wrenching, incalculable loss. Almost 1,000 children have been confirmed killed or injured since the war began, according to UNICEF, though the agency believes the true number to be much higher.

On social media, Iryna has been inundated with thousands of messages of love, prayers and support from around the world. Some people have shared paintings and poems with her.

The outpouring has brought comfort, though Iryna says she has nothing left.

In a dream she had the day after the attack, she saw Liza in her white dress, surrounded by bright yellow smoke. She embraced her daughter who then moved away. She tried to reach for Liza’s hand, but she couldn’t quite grasp it.

“I ask Liza to take me with her,” Iryna said.

The Washington Post’s Annabelle Chapman contributed to this report.