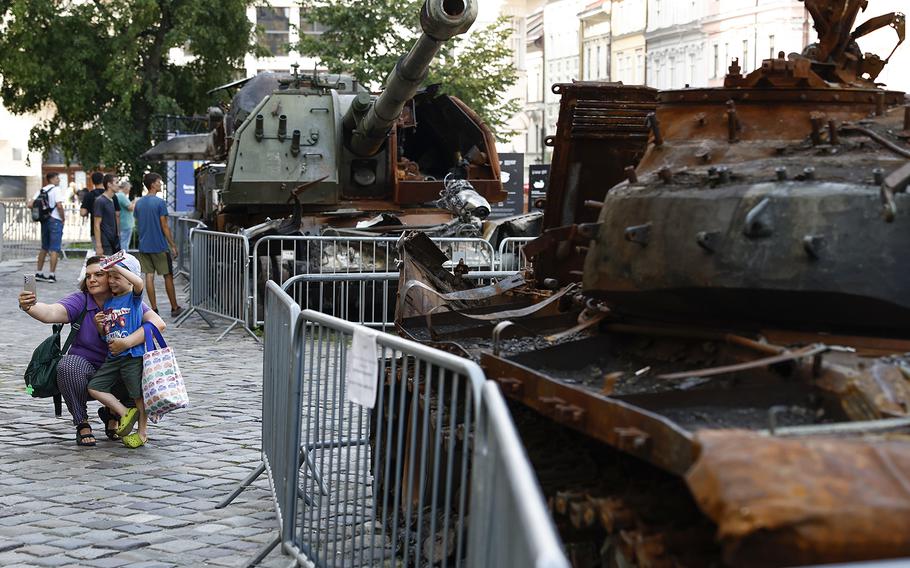 Members of the public look around some destroyed Russian tanks in the city center in Lviv, Ukraine, on Aug. 22, 2022. (Jeff J Mitchell/Getty Images/TNS)

BERLIN (Tribune News Service) — A Russian soldier's searing firsthand account of the Ukraine invasion — depicting ordinary foot soldiers exploited as cannon fodder by inept commanders and a cynical Kremlin leadership — is drawing decidedly mixed reviews from inside and outside the battle zone.

For many outside observers, the ex-serviceman's 141-page memoir, posted by him online in early August, offers a rare inside glimpse of Moscow's brutal yet bungled attempt to subdue a smaller and less powerful neighbor.

But six months into a devastating war, some Ukrainians believe that widespread Western media attention to the veteran ex-paratrooper's journal unfairly lionizes a willing tool of the Russian military machine, who should share in the accountability for wartime atrocities.

Moscow has maintained an icy public silence over the claims made by former soldier Pavel Filatyev, who managed to flee Russia earlier this month after self-publishing his explosive story on VKontakte, a Russian-language platform similar to Facebook.

The 34-year-old said he took part in Russia's initial assault and spent two months in southern Ukraine before being shipped home with a severe eye infection stemming from dirt blasted into his face by bombardment. He wrote the memoir during his recuperation.

Filatyev's depiction of a haphazard and disorderly offensive, with many Russian troops unaware of their true objective even as they pushed their way into Ukrainian cities and towns, is in many respects consistent with appraisals issued by Western intelligence.

"Morale is poor in many parts" of Russia's military, and its army is "significantly degraded," Britain's Ministry of Defense said Wednesday — Ukraine's Independence Day, which coincides with the six-month mark of the invasion — in an intelligence assessment similar to other recent evaluations by the Pentagon and Western analysts.

But while the broad outlines of Moscow's methods and tactics have become steadily apparent — as well as its missteps, most notably the early, failed attempt to seize the Ukrainian capital, Kyiv — Filatyev's account offers a granular, on-the-ground portrait that casts Russian President Vladimir Putin's war effort in an even more damning light.

Some scenes are vividly drawn: After capturing the southern city of Kherson, the first major Ukrainian metropolis to fall to the Russian invaders, ravenous and ill-provisioned troops wolfed down whatever food stocks they could find, Filatyev wrote.

"Like savages, we ate everything there: oats, porridge, jam, honey, coffee," he wrote, describing his comrades-in-arms as "exhausted and feral."

For troops in the field, he wrote, there was "no hint of comfort, a shower or normal food." Most equipment was ancient and malfunctioning, including the rusty rifle he was issued.

Whole Russian units were wiped out by friendly fire, he asserted, and soldiers frequently shot or otherwise deliberately injured themselves in a bid to be sent home.

While Filatyev's day-to-day anecdotes and descriptions of particular scenes could not be independently verified, his service record in the 56th Guards Air Assault Regiment — which took part in the capture of Kherson and then was stationed on the battlefront outside the nearby city of Mykolaiv — was confirmed by news organizations including the Russian investigative consortium iStories, now based in Riga, Latvia, which published abridged excerpts.

Throughout the memoir — titled "ZOV," after the tactical symbol daubed on Russian vehicles — Filatyev depicted rock-bottom troop morale and commanders far out of their depth. Higher-ups, he said, had clearly decided to "flood Ukraine with our corpses."

Although a disillusioned Filatyev denounced the war as morally wrong and declared he wanted no further part in it, some Ukrainians are infuriated by the memoir's wealth of detail about privations endured by Russian forces rather than about the death and destruction they wrought in a country invaded without provocation.

Filatyev, now in an undisclosed location after a human rights network helped him leave Russia, has given several news interviews describing how, after posting his memoir online, he moved from place to place, expecting to be arrested at any time. That prompted Ukrainian podcaster and activist Maksym Eristavi to tweet a denunciation of what he called the "romanticizing" of "a Russian terrorist killing [Ukrainian] families."

Some military historians, however, consider the memoir an authoritative pushback against the Kremlin's nonstop glorification of purported military successes in Ukraine, and a useful addition to the annals of this war. Firsthand accounts from Russian soldiers have mainly been fleeting in nature — captured, for example, in intercepted phone conversations with family members at home.

Author and researcher Chris Owen, who put together several long Twitter threads based on Filatyev's disclosures, wrote that the soldier's account, by far the longest and most detailed of its kind, "provides an informative insider's perspective on what has gone wrong" for Russia in Ukraine.

But in Russia, where independent news outlets have been shuttered and criticism of the "special military operation" criminalized, relatively few people have seen even the excerpts published by mostly blocked outlets, let alone the entire memoir.

Public opinion polls — to the extent they can be relied upon — point to continuing robust approval ratings for Putin, a phenomenon that Ukrainian analyst Denis Bohush, the director of the Center for Russian Studies in Kyiv, attributes to "20-plus years of Putin's personal propaganda machine."

Despite his scathing assessment of the Ukraine war, Filatyev, who came from a military family and had previously served with the Russian army in Chechnya, expressed residual feelings of loyalty toward an institution he had long served.

In an interview last week with the German news magazine Der Spiegel, conducted over Zoom from an undisclosed location, Filatyev, described as appearing weary and somber, said that he wanted the Russian army to be "strong and good," and that his account was meant to help achieve that end.

"Only when we talk openly about our problems in Russian society can we bring order to the armed forces," he said. "At the same time, I don't want it to be an aggressor and threaten the whole world."

Special correspondent Markus Ziener in Berlin contributed to this report.)