Pentagon expands use of seas to send weapons to Ukraine 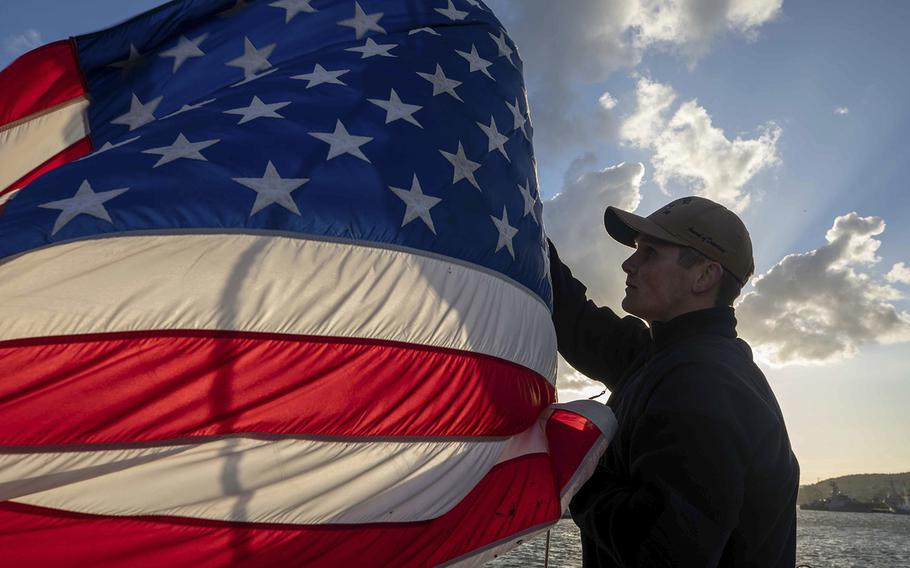 SCOTT AIR FORCE BASE, Ill. — The Pentagon has expanded its use of maritime shipping to deliver weapons for the war in Ukraine, U.S. defense officials said, after relying heavily on aircraft early in Russia's invasion to get arms to Kyiv as quickly as possible.

The Defense Department began sending some items by sea a few weeks after the invasion but significantly broadened the effort this spring, as the United States began providing Ukraine with howitzer artillery and other heavy weapons that require a steady flow of large-caliber ammunition, U.S. defense officials said here at the headquarters of U.S. Transportation Command, as Deputy Defense Secretary Kathleen Hicks visited recently.

"Once we started to provide them howitzers, we knew that we were going to need more ammunition," said Army Col. Steven Putthoff, the deputy director of operations at U.S. Transportation Command. "So, we could plan ahead a little bit more and then we could start to use more sealift to provide that support and to get it there sometimes even ahead of the request."

The expansion underscores a new phase in the campaign, after a Russian assault on Kyiv was repelled and Ukraine and its partners settled in for what is expected to be a grinding war that could continue for months more and possibly years. The Biden administration has approved $12.9 billion of military assistance for Ukraine since the Feb. 24 invasion and pledged an additional $2.98 billion of support Wednesday, on Ukraine's independence day.

U.S. military officials declined to detail specific routes used to get weapons to Ukraine but said that some of the weapons coming from the continental United States find their way directly to the battlefield, while others are being used to replenish American stocks elsewhere in Europe from which U.S. military officials withdrew supplies to arm Ukraine.

While aircraft can reach Europe from the United States much more quickly, ships can haul vast quantities of cargo that could allow Ukraine to build up a larger arsenal for future campaigns in the war.

The effort comes a year after the United States carried out a harrowing evacuation of more than 124,000 people from Afghanistan, taxing the Pentagon's fleet of cargo jets. At the height of the operation, a C-17 was landing at Hamid Karzai International Airport at least once per hour. That heavy schedule required the Transportation Command to suspend other operations until the evacuation was completed and then catch up aircraft on maintenance, Putthoff said.

During the evacuation, Putthoff said, "everything else on the world kind of went on hold, what we call 'broken glass.' We had to go back in and clean that up the next few months."

The weapons deliveries to Ukraine are different, he said. While virtually all flights landing in Kabul during the evacuation were military jets, the Pentagon has relied heavily on chartered aircraft and ships to move equipment for Ukraine, leaving the U.S. military free to carry out a variety of other transport missions.

At Transportation Command, Hicks met Aug. 18 with military officials including Air Force Gen. Jackie Van Ovost, the command's top officer. Van Ovost said that anticipating possible needs and setting routes as quickly as possible is key. Equipment usually moves from a military depot by train or truck to an airport or seaport, and then arrives in a second location from where it often must be moved again.

"We're not graded on getting it to a location where it's not being used," Van Ovost said, speaking to Hicks, the Pentagon's No. 2 official. "We're getting graded on end-to-end."

Van Ovost said that the manual calculations that U.S. military officials had to do in the past to move equipment took days.

"Now we have systems that allow us to perfect it," she said. "It's less airplanes, in the right locations, at the right times. And it's done by the press of a button, and three or four seconds later we have three or four options."

Hicks credited Transcom officials with carrying out an "impressive ballet" to move everything that is needed. She told reporters after that she wants to make sure that the military has the ability to sustain its fleets and keep them appropriately sized.

"Ukraine, as challenging as it is, does not compare really to the level of lift and mobility and refueling that need to be done in a major conflict," Hicks said.

Among the weapons that the Pentagon has delivered to Ukraine so far are more than 1,400 antiaircraft Stinger missiles, 8,500 Javelin anti-armor missiles (critical in destroying Russian tanks), 700 Switchblade drones and 142 pieces of howitzer artillery with more than 900,000 rounds.

On Wednesday, senior Pentagon officials said that they expect even more military assistance to flow to Ukraine after the recent $3 billion commitment.

"This may be our largest security assistance package to date, but let me be clear: It will not be our last," said Colin Kahl, the undersecretary of defense for policy, in a news briefing. "We will continue to closely consult with Ukraine on its near-, mid- and long-term capability needs."