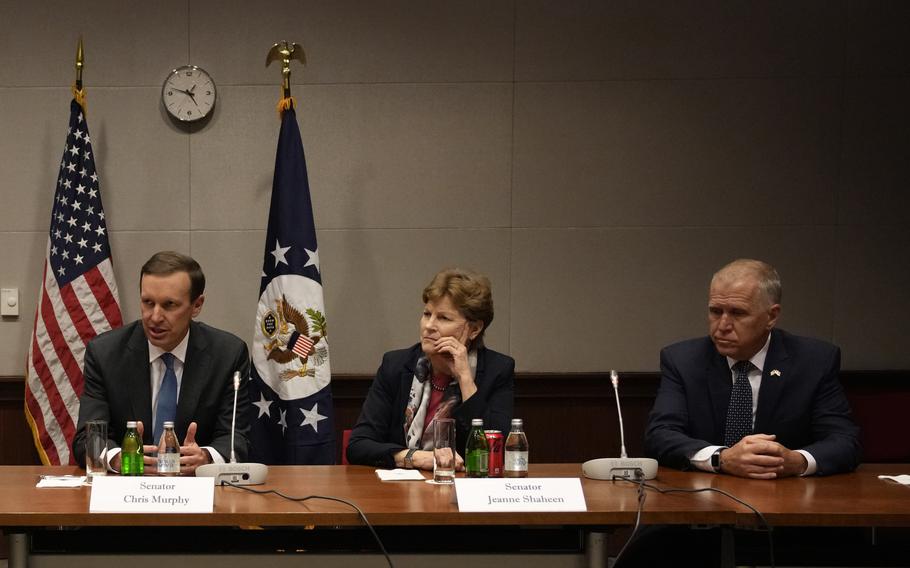 From left, Sens. Chris Murphy, D-Conn., Jeanne Shaheen, D-N.H., and Thom Tillis, R-N.C., speak at the U.S. embassy in Belgrade, Serbia, in April. Shaheen and Tillis said Wednesday, June 29, 2022, that Ukraine’s fate on the battlefield against Russia will determine the path of Russian President Vladimir Putin’s revanchist ambitions and influence the economic stability of the U.S. and the future of democracies worldwide. (Darko Vojinovic/AP)

Two members of the Senate NATO Observer Group vowed Wednesday to keep the American public engaged with the war in Ukraine despite inflation and other domestic challenges, linking the outcome of the conflict to long-term national security.

Sens. Jeanne Shaheen, D-N.H., and Thom Tillis, R-N.C., who are co-chairpersons of the group, said Ukraine’s fate on the battlefield will determine the path of Russian President Vladimir Putin’s revanchist ambitions and influence the economic stability of the U.S. and the future of democracies worldwide.

“[People] need to understand that Vladimir Putin is playing a chess game,” Tillis said at a forum in Madrid. “He's trying to reestablish an empire, and it only starts with the success in Ukraine and it continues. So yes, to that constituent of mine in North Carolina, [Ukraine] may seem an ocean away, but they're not. And every time we turn our backs, we live to regret it.”

The two senators are leading a congressional delegation to a historic NATO summit in Spain, where the military alliance is unveiling sweeping plans to bolster its borders against Russian aggression. The Senate group spoke hours after NATO declared Russia the “most significant and direct threat” to its members’ peace and security.

Ukraine President Volodymyr Zelenskyy appealed to NATO allies for more weapons in a video address Wednesday and said failure to continue funneling military aid to his beleaguered country would bring about “a delayed war between Russia and yourself.”

“The question is: Who is next for Russia? Moldova? The Baltic states? Poland? The answer is all of them,” Zelenskyy said.

Shaheen reiterated that point, describing the financial sacrifices of Americans paying more at the gas pump and grocery stores as the cost of defending freedom.

“If we support the Ukrainians, then hopefully we won't have to send our soldiers to Ukraine,” she said. “This is for democracies around the world. It’s for the United States, but it’s also for all of us who believe every human being should have the right to determine their own future.”

Tillis warned the situation in Ukraine is “every bit as threatening today” as it was on Feb. 24, when Russian forces launched a multi-front attack on Ukraine with the aim of capturing its capital, Kyiv. The war has now settled into an artillery battle in the eastern Donbas region, with Russia making incremental gains.

The U.S. announced last week its latest military aid package to Ukraine, increasing the number of High Mobility Artillery Rocket Systems allocated to Ukrainian fighters from four to eight. Ukraine officials have said they need hundreds of such systems to end the war.

Up to 200 soldiers are dying in combat each day, according to estimates from Kyiv.

“We have to continue to have the resolve — the decision we made to provide additional support to Ukraine is important,” Tillis said.

Senators on Wednesday also expressed resounding support for NATO and said they will strive to “make history” upon returning to Washington, D.C., by quickly approving the accession of Finland and Sweden into the alliance. The membership path for the formerly neutral countries was cleared Tuesday with Turkey’s agreement to drop its objections to the bids.

Tillis said Congress will remain committed to the alliance no matter who sits in the White House after the 2024 presidential election. President Donald Trump expressed interest in leaving NATO during his 2016 campaign, prompting lawmakers to introduce bills blocking any president from withdrawing the U.S. from the alliance without congressional approval.

Conversations about separating U.S. membership to NATO from the powers of the executive branch will continue, Tillis said.

“That’s a discussion that we will have in Congress and potentially find ways to have Congress be actively involved in any future administration that would even contemplate [withdrawing],” he said. “This is an important alliance. It's an alliance that needs to exist for centuries, in my opinion, and continue to expand.”