WASHINGTON — The Western artillery flooding into Ukraine will alter the war with Russia, setting off a bloody battle of wits backed by long-range weapons and forcing both sides to grow more nimble if they hope to avoid significant fatalities as fighting intensifies in the east, U.S. officials and military analysts predict.

The expanded artillery battle follows Russia’s failed effort to rapidly seize Ukraine’s major populations centers, including the capital city, Kyiv, and comes as the government of President Volodymyr Zelenskyy and his Western benefactors brace for what is expected to be a grinding campaign in the Donbas region. The conflict there is expected to showcase the long-range cannons that are a centerpiece of Russia’s arsenal, weaponry already used to devastating effect in places like Mariupol, a southern port city that’s been pulverized by unrelenting bombardment.

Defense Secretary Lloyd Austin, speaking alongside his Canadian counterpart at the Pentagon on Thursday, said long-range fires will prove “decisive” in the next phase of the war. The Biden administration, which along with Canada is training small numbers of Ukrainian troops how to operate the dozens of 155 mm howitzers that both countries have pledge to provide, is expected to approve the transfer of even more artillery to Ukraine in coming days, Austin said.

The U.S. and Canadian howitzers bound for Ukraine are towed on trailers, while those pledged by France - systems known as self-propelled CAESAR howitzers - fire the same, 155 mm explosive rounds, but from the back of a truck chassis.

The United States alone already has promised Zelenskyy nearly 190,000 artillery rounds, plus 90 howitzers to fire them. As of Thursday, more than half had arrived in Ukraine, said a senior U.S. defense official who, like some others, spoke on the condition of anonymity under ground rules set by the administration.

A new $33 billion request to Congress for additional Ukraine aid includes proposed funding for “longer-range artillery of a heavier caliber,” Secretary of State Antony Blinken told lawmakers on Capitol Hill, though he stopped short of identifying which specific systems are under consideration. Other allies, such as Britain or Sweden, also could send artillery, analysts said.

To date, Russia and Ukraine have traded fire using some of the same systems, including the powerful 300 mm Smerch multiple-launch rocket system, which can shoot rounds some 55 miles, and aging 122 mm howitzers first fielded in the 1960s. The introduction of various Western artillery pieces is expected to accelerate a tactical shift by both sides to employ what’s known as counter-battery fire, in which military forces seek out their enemy’s artillery, determine its location and attack, analysts said.

“You’re trying to find, fix and finish,” said George Flynn, a retired three-star Marine general and former artillery officer. “You want to find the enemy howitzers. You want to fix their position. And then you want to finish them off. That’s the essence of targeting.” 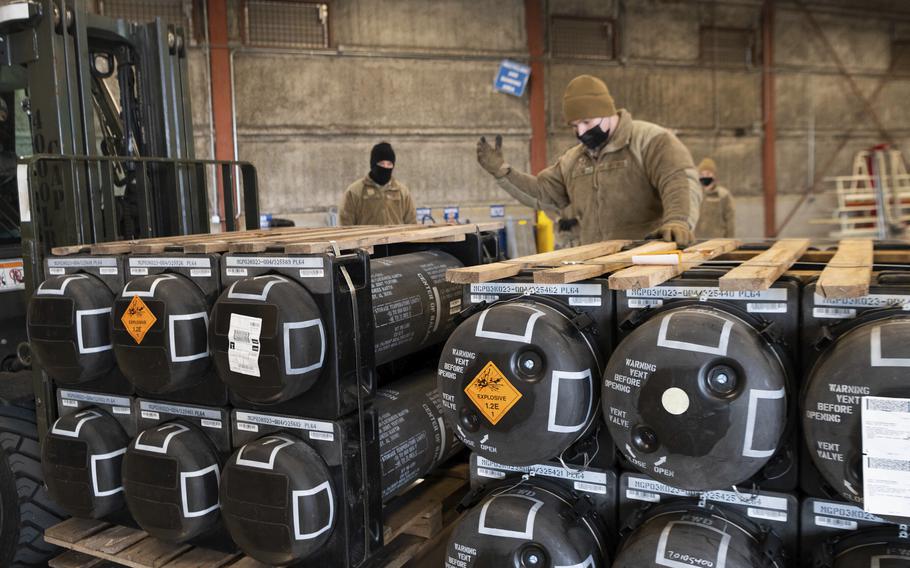 Airmen and civilians from the 436th Aerial Port Squadron palletize ammunition, weapons and other equipment bound for Ukraine during a foreign military sales mission at Dover Air Force Base, Del., on Jan. 21, 2022. (Mauricio Campino, U.S. Air Force via AP)

After an artillery unit attacks an adversary, it needs to keep moving, Flynn said. “Once you get into a counter-battery fight, it’s shoot and scoot,” he added. “You don’t stick around and let yourself get targeted.”

Ukraine’s ability to target Russian artillery units is especially important, analysts say, because of the Kremlin’s demonstrated willingness to lob round after round into cities and towns, destroying civilian homes and infrastructure. “Just the existence” of more Ukrainian artillery units performing counter-battery fire will degrade Russia’s ability to “sit there, pile up ammo and go to town,” said Scott Boston, a former U.S. Army field artillery officer who studies the Russian military for the Rand Corporation.

“The problem” that Ukraine and its Western allies would “like to impose on the Russians,” he said, “is for them to never have confidence that a headquarters, or a key ammunitions dump, or an important cluster of firing platforms, can ever be stationary for very long.”

The Pentagon on Friday assessed that Russia has not been as effective as it would like at using long-range fires, with a senior defense official noting that, as the West continues to send so much artillery to Ukraine, “This could become a bit of a gunbattle.”

Artillery units often disguise themselves with camouflage or other forms of cover, and it can require a mixture of intelligence, unmanned aircraft and radar to spot them. The West is providing Ukraine with drones and counter-battery radar to do just that.

Zelenskyy also has requested some form of multiple-rocket artillery, such as the highly accurate M142 High Mobility Artillery Rocket System, known as HIMARS, that is used by the U.S. Army and Marine Corps. Such weapons launch rounds quickly, which is useful in firing on enemy artillery forces before they reposition, said Mark Cancian, a retired Marine Corps colonel who studies the war for the Center for Strategic and International Studies in Washington.

Cancian, a former artillery officer, said that there “will be a lot of pressure to provide” HIMARS in coming days, and that he wouldn’t be surprised to see the United States begin supplying it soon. Another type of multiple-rocket launch system, such as the M270 operated by the U.S. Army, also could be sent, he surmised. The HIMARS is newer and moves about the battlefield more freely, while the M270 carries more rockets.

“I think there will be a lot of pressure to provide that, and since we seem to be announcing an aid package a week, I wouldn’t be surprised to see HIMARS next week or the week after,” Cancian said.

Ukrainian officials also have sought more self-propelled howitzers rather than towed weapons such as the M777. A Ukrainian official, speaking on the condition of anonymity because the issue is sensitive, said that while it appears easier to perform maintenance on and find parts for the M777 howitzer, they are more vulnerable to Russian counter-battery fire than self-propelled howitzers, like the Army’s M109 Paladin.

Cancian said he would be watching to see whether advanced, highly accurate 155 mm Excalibur rounds make it to Ukraine. The weapons are guided by GPS and designed to fly up to 25 miles, according to Raytheon, its manufacturer. The Pentagon has declined to specify what types of artillery rounds are being sent.

The shipping of Western artillery into Ukraine is important partly because there are few places where Ukraine can find replacement rounds for its Soviet-era systems, said Sam Cranny-Evans, an analyst at the Royal United Services Institute in London. Poland, Bulgaria and a few other NATO allies produce them, but many more countries produce ammunition for Western weapons.

While the West has promised tens of thousands of artillery rounds to Ukraine, they may be depleted quickly, Cranny-Evans said, requiring defense contractors to ramp up production. Russia also has a significant advantage in the number of artillery pieces it possesses, and it’s unclear how many of Ukraine’s legacy systems are still operational or how much ammunition they have for them, he added.

Russians forces are using artillery to extricate themselves from Ukrainian ambushes and inflict fatalities as well as to avoid having to go “into the teeth of these very high-end Western weapons,” including Javelin and NLAW anti-armor missiles, that already have destroyed some Russian units, Cranny-Evans said.

“They’re just going to sit back and let their long-range assets to do the work because they don’t have the manpower to waste,” he said.

Canadian Defense Minister Anita Anand said in an interview that there is a role for collaboration among Western countries in providing weapons to Ukraine that are “consistent and interchangeable,” allowing Ukraine to learn the systems and maintain them when they are damaged.

“The M777s are a perfect example of the way in which allied countries with that capability can band together and respond to a desperate need that Ukraine has,” she said. “And that’s a model that we’ll continue to utilize going forward.”

The use of artillery and other weapons has been complementary in Ukraine and will continue to be, Boston said.

“If you do a good job of bottling someone up, then they’re going to be way more vulnerable to artillery than if they were dispersed and in cover,” he said. “If the Russians don’t have confidence that they can disperse because they’re going to get picked off by Javelin teams, then they might be bunching for security against that - and then be more vulnerable against artillery.”

The Washington Post’s Karen DeYoung in Washington, David Stern in Mukachevo, Ukraine, and Alex Horton in Kyiv contributed to this report.