Finance offices in Rheinland-Pfalz, a German state led by Malu Dreyer, have been among the most aggressive in trying to extract tax payments from U.S. military personnel, which the U.S. government says is a violation of an international military treaty. Here, Dreyer mingles with Americans at a 2020 “Welcome to Rheinland-Pfalz” event. (Taylor D. Slater/U.S. Air Force)

The Defense Department has directed the U.S. military in Germany to uncover how many of its people have been targeted by local tax collectors so Berlin gets a “comprehensive picture” of a dispute that has financially ruined a growing number of Americans.

Earlier this month, U.S. Army and Air Force headquarters in Germany were ordered to begin collecting the data, which is to be handed over to U.S. European Command, according to tasking sheets provided to Stars and Stripes.

Tax offices in Germany operate more independently from the federal finance ministry, so officials at the national level “do not have visibility into the scope of this issue,” the summary sheet states.

The Office of the Secretary of Defense is seeking “a by-name listing of U.S. SOFA-status personnel who have been subject to actions taken by the German tax authorities,” the memo says.

Despite U.S. protests, hundreds of American military personnel remain engaged in tax fights with German finance offices, primarily in the state of Rheinland-Pfalz, where more than 50,000 Americans with military ties reside.

The financial stakes for those involved are high. Tax penalties have reached into the six figures for some Americans because the Germans tax not only military pay but benefits such as discounted gasoline, education in Defense Department schools, housing allowances and tax-free grocery shopping. 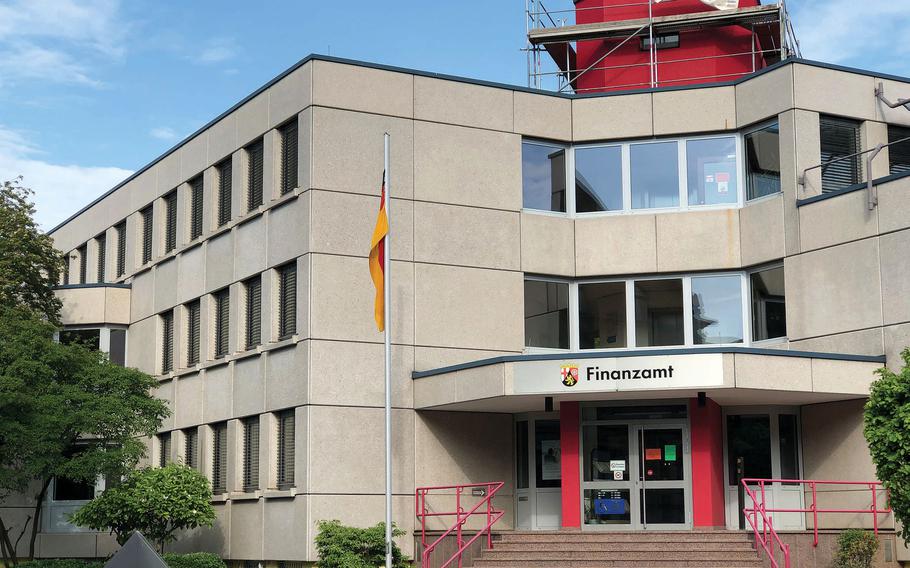 The tax office in Kusel, Germany, where many of the tax-liability cases against service members and Defense Department civilians have originated from. Defense Secretary Lloyd Austins office has directed commands in Germany to uncover how many military members have been targeted by local tax offices, in a move aimed at providing Berlin with a comprehensive picture of a diplomatic dispute still unresolved. (Stars and Stripes)

Even access to free on-base gyms has been added into some German tax bills, affected personnel and attorneys have told Stars and Stripes.

At issue is the German view that the SOFA contains a tax loophole in which military personnel are viable targets if they are not in Germany “solely” for their jobs. What this means remains undefined.

Being married to a German, sending a child to a German school or signing up for a second tour of duty are among the factors taken into consideration by authorities as they build tax liability cases.

German authorities have said Americans who come under tax investigation must prove a “willingness to return” to the U.S. if they want to avoid being penalized. Yet leaving Germany, the ultimate proof of intent to leave, doesn’t guarantee protection.

Jason Ille, an Army civilian who now resides in Alaska, was issued a 300,000 euro ($326,000) tax bill in 2018 by the Kusel-Landstuhl finance office, which oversees the area around Ramstein Air Base.

Before that, he had been regularly applying for Army jobs in the United States and furnished proof of that to tax authorities, he said. But the evidence of “will to return” wasn’t accepted, he said.

“I have returned to Alaska and will never step foot in Germany again,” Ille said. “I will say what upsets me the most is the fact that our military community gets absolutely no assistance from our government to stop the madness.”

Untold numbers of personnel could be future targets because German tax jurisdictions contend that they have the power to impose local income tax on military members on a case-by-case basis. The tax offices are imposing collections on military paychecks and income that has already been taxed by the U.S. government in most cases.

“This situation has caused my family so much undue stress (that) nobody should have to endure,” Ille said. “And the German government should be held accountable for their false accusations.”

EUCOM declined to comment on the latest Defense Department order to tally case numbers. However, the command did say that all personnel, military and civilians, should report encounters with German finance offices.

EUCOM said that the situation has the attention of U.S. military leadership and that the State Department is “actively engaged with the German Ministry of Foreign Affairs in finding a solution.”

But short of being able to audit German finance office tax records going back years, it could be difficult for the military to uncover the actual number of people who have been affected, especially given that many have since departed Germany and are no longer part of any Europe-based chain of command.

There are at least 460 or so ongoing SOFA-related tax cases in the area around Ramstein Air Base alone, the Kusel-Landstuhl finance office told Stars and Stripes in January. Some of those cases could involve personnel from other NATO countries, although the overwhelming majority of foreign forces personnel in the area are Americans.

“German tax offices have told us they do not track cases by nationality, making it difficult for them to answer repeated efforts to know how many service members and civilians, covered under the NATO SOFA, have been affected,” EUCOM said.