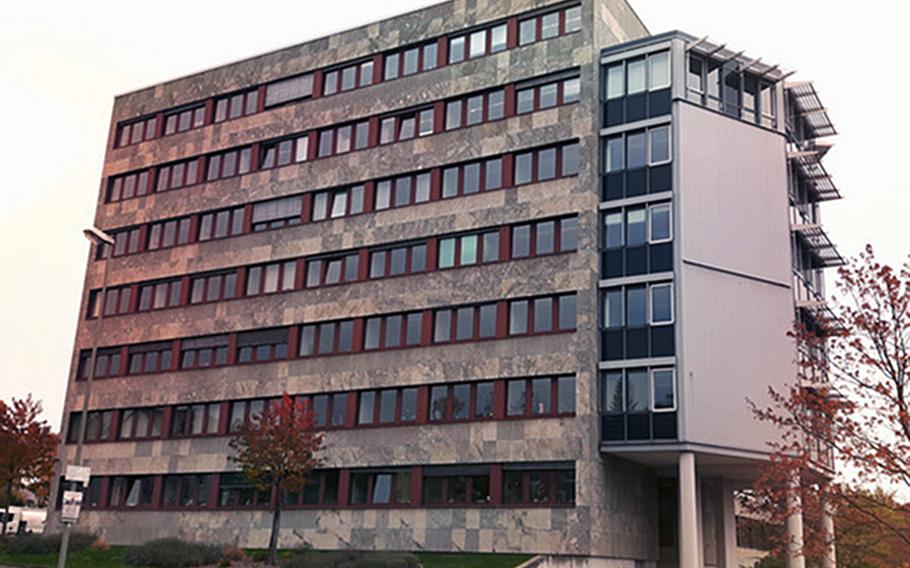 The financial court building in Neustadt, Germany. It is where Rheinland-Pfalz income tax dispute cases are litigated, including those involving American citizens working in Germany under the NATO Status of Forces Agreement. One Ramstein military civilian was charged about $300,000 in penalties on his U.S. paycheck, a practice the State Department says misinterprets SOFA. (Rheinland-Pfalz state government)

And special agent Dirk Roessling, a German employee of the U.S. Air Force’s Office of Special Investigations at Ramstein, obliged in a five-page report that ended up being used against a U.S. military-affiliated family in tax court.

The report shows a U.S. military agency collaborating with German authorities to collect German income tax penalties on U.S. military paychecks — a practice the State Department considers a violation of a multinational treaty.

“It felt like there was a mole on the inside,” said the American, who worked as a military civilian at Ramstein under the NATO Status of Forces Agreement before moving to the U.S. in 2020.

Added his German wife: “They knew everything. I feel like they are Stasi people working there,” a reference to the secret police of communist East Germany during the Cold War.

The couple, who spoke on condition of anonymity for fear of being retargeted by collectors, are among an untold number of Americans connected to the military in Germany who have been financially ruined by local tax offices.

The cooperation of the Air Force’s OSI branch at Ramstein came to light after Stars and Stripes was provided a copy of the purchase records covering four years that Roessling sent the Neustadt finance department in 2018.

The Neustadt office is where Rheinland-Pfalz tax dispute cases are litigated.

The couple lost their case in tax court in Neustadt in 2020. The court determined that the American wasn’t in Germany “solely” for his job and that he had no intention of returning to the U.S., where he now lives, the family said.

Mike Goff, a retired Air Force senior master sergeant who serves as an advocate for the affected military community in Germany, said he was “astonished” that any U.S. military office handed over information about on-base purchases by a SOFA-protected American “to share with a foreign country’s most feared agency.”

U.S. Air Forces in Europe said in a statement that the Air Force Office of Special Investigations “does not comment on pending legal matters.”

Roessling, the special agent who sent the report to the tax authorities, did not respond to a request for comment.

More than one year after the U.S. government lodged a diplomatic complaint that German finance offices are misinterpreting the SOFA in their attempts to tax military personnel, there is still no end in sight to what has become a revenue stream for some German garrison towns.

“At this time, we cannot get into specific discussions,” a U.S. State Department spokesman told Stars and Stripes in a statement. “However, we can assure you that the U.S. government has expressed at very high levels our eagerness to see the long-standing issue resolved. We will continue to engage with our German partners on this matter.”

In September, Secretary of State Antony Blinken told reporters during a visit to Ramstein Air Base that he was unaware of the matter but that he would look into it. Defense Secretary Lloyd Austin raised his concerns with his German counterpart during a Pentagon meeting in June.

While diplomatic talks drag on, there are new questions about how much cooperation U.S. military investigators should give when German authorities pursue these tax cases.

The dispute centers on how to interpret the NATO treaty, which puts the pay and benefits of those with military visas off-limits to local tax collectors.

No other country with large concentrations of U.S. forces, including Italy, the United Kingdom, Japan and South Korea, has tried to collect income tax on military paychecks, which are already taxed by the U.S. government.

But some German authorities say the treaty leaves the door open to taxing Americans who have personal reasons for being in Germany.

Being married to a German, sending children to local schools or having lengthy tours of duty are some of the factors considered in tax liability cases.

Certain groups of military civilians, such as teachers, are especially at risk because their positions don’t come with tour length restrictions, and they can spend their whole careers abroad.

For American personnel, getting into a tax battle with the Germans involves more than just pay. Finance offices use base amenities to inflate bills.

Things like access to discounted gas, Defense Department schools for children, tax-free shopping and free gyms are among the privileges that get factored in.

“This is what the (German finance offices) use to tack on upwards of 15,000 euros to our fellow Americans’ income to squeeze more illegal money out of them,” Goff said.

Both USAFE and U.S. Army Europe and Africa say they are unaware of requests by local tax offices for purchase records from base authorities for use in tax assessments against personnel.

That raises the question of whether German tax officials are approaching U.S. military investigators with felony allegations of tax fraud as a means of accessing the records, which can then be redirected to noncriminal tax dispute cases at issue in the SOFA dispute.

Under the SOFA, the military must provide information in certain cases, such as when goods are being sold on the black market.

The SOFA provisions also apply when a person or business is already subject to German taxation.

For example, the military would have to provide records pertaining to on-base concessionaires who are accused of not reporting income and purchases to German authorities.

Yet Ramstein’s OSI office appears to have gone a step further, sending information on a military-affiliated family that it acknowledged in its letter to German finance officials had “full entitlement” to privileges.

The Landstuhl-Kusel finance office, which oversees matters in the Ramstein area, defended its methods.

In a statement, it said it seeks information for tax cases “based exclusively” on what is “permitted under procedural law” and provisions in the SOFA.

German authorities haven’t revealed how much money they’ve collected from American personnel over the years or how many people have been targeted in all, but in the Ramstein Air Base area alone, there were roughly 400 cases as of last year.