‘We fought strictly alone’: Airman whose German tax case was dropped says military must start going to bat for its own 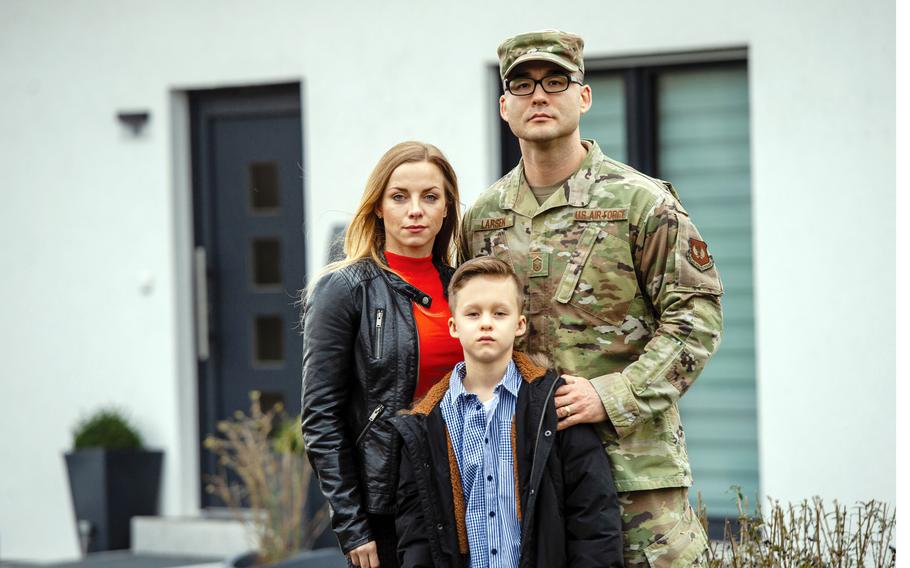 Then-Master Sgt. Matthew Larsen, wife Kathrin and son Jayden stand in front of their house in Reichweiler, Germany, on March 11, 2020. A German tax office recently decided to stop pursuing its case against the recently retired airman. (Brian Ferguson/Stars and Stripes)

A German tax office has rescinded its case against a retired U.S. airman, who said his situation should serve as a wake-up call to the military over its failure to defend its personnel from potential financial ruin.

Earlier this month, an attorney for former Master Sgt. Matthew Larsen received notification from the Kusel-Landstuhl finance office that it was ending its pursuit of the American.

Still, Larsen said his victory reinforces his view that the U.S. military in Europe has failed to stand up for a growing number of American personnel who still find themselves ensnared in high-stakes fights with German authorities.

“The Air Force didn’t win this case for us,” Larsen told Stars and Stripes last week. “Neither did DOD or the embassy. This is something we fought strictly alone.”

His final years of active duty were marred by threats of fines and even imprisonment if he didn’t hand over his U.S. tax records to German authorities for inspection.

The State Department has said repeatedly that local tax offices are violating the NATO Status of Forces Agreement when they try to force U.S. personnel to pay German income taxes and penalties on their military pay and benefits.

Larsen drew the attention of tax officials because he is married to a German woman, which in their eyes can be justification for treating military personnel as taxable German residents despite their military visas.

In addition to being married to a German, factors that can put military members at tax risk include owning property, sending children to German schools or having lengthy tours of duty.

While talks aimed at resolving the diplomatic impasse drag on between Washington and Berlin, Americans remain targets and revenue sources for German garrison towns.

Bills have reached into the six figures in some cases, with German authorities taxing not only military salaries but also so-called privileges, such as access to free on-base schools for children, gym use, discounted gasoline and tax-free shopping at commissaries.

Larsen’s case, which emerged in April 2020, put a spotlight on the increasingly aggressive tactics used by tax offices in areas where large numbers of U.S. troops are based.

But in a letter dated Nov. 29, the tax office wrote that the situation was “hereby resolved” and that Larsen didn’t owe the money the Germans were seeking.

The decision marked a quick reversal. Days earlier, the tax office had issued a fine and a demand that Larsen submit his tax records, even though his tour in Germany had already ended and he was back in the United States.

The tax office didn’t offer a reason for its decision to back down. German tax officials have said in the past that as a rule, they can’t comment publicly on private cases.

Larsen said that at the outset, he was told by Army and Air Force legal offices that he would need to retain his own attorney because the military regards such cases as a private matter.

Faced with an $11,000 fine and possible imprisonment for failure to provide tax records, Larsen said he had no one but his attorney fighting on his behalf.

“Any feeling I had of being protected because I was in the U.S. military, that went right out the window with this case,” he said.

The Army, which oversees all SOFA maters in Germany, did not respond to questions about what prevents it from providing legal support to affected personnel.

In Germany, military commands are often involved when situations arise with government authorities. For example, traffic violations and speeding tickets from the Germans are run through command offices before troops are informed, Larsen said.

“In this case, where something could evaporate somebody’s entire life savings, something that can affect your security clearance and job, (military leaders) aren’t involved at all,” Larsen said. “This is huge stuff. It baffles me to no end.”