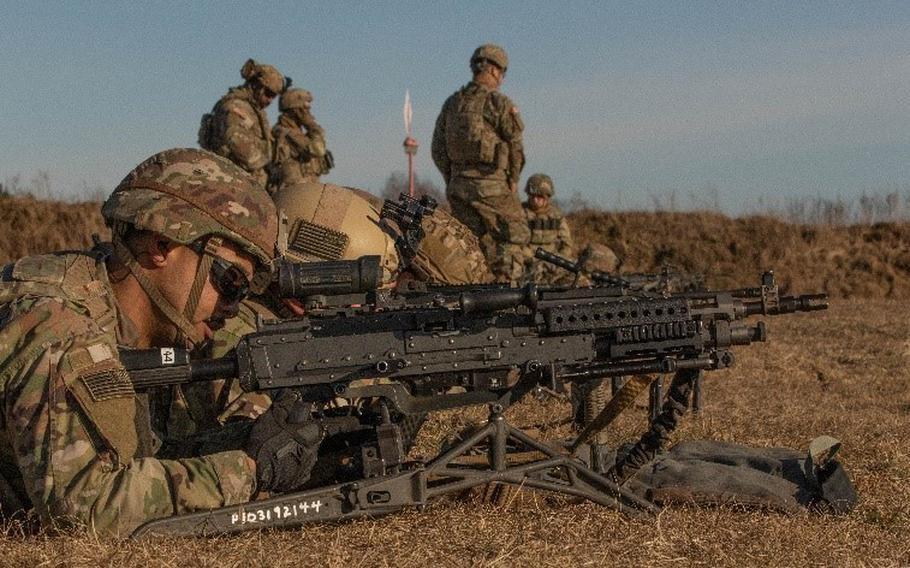 WASHINGTON — U.S. military personnel will remain in Poland to help defend the NATO country despite a Russian missile attack over the weekend on a Ukrainian military facility about 15 miles from the Ukraine-Polish border, a senior U.S. defense official said Monday.

About 35 people were killed in the Russian strikes, Ukrainian officials said Sunday. However, the U.S. official on Monday could not verify the casualty count.

The strike was Russia’s closest yet to a NATO country since the war in Ukraine began Feb. 24. Under NATO’s common defense policy, the U.S. military is required to come to the defense of Poland — or any NATO country — if attacked.

The U.S. has roughly 8,750 troops in Poland — more than half of whom were sent to the country in the past six weeks as tensions increased with Russia leading up to its invasion of Ukraine. Some U.S. troops were already in the country on a rotational basis.

But the defense official said those troops will not reposition as Russia’s offensive strikes creep further west.

"This has not changed our posture and it certainly hasn't precipitated any specific decision to move or reposition anybody else into or out of Poland," the official said.

The U.S. does not know why Russia launched the strikes in western Ukraine, chief Pentagon spokesman John Kirby said Monday, adding “Russian targeting justification” is “not always clear to us.”

“This is now the third significant strike in western Ukraine,” he said. “It certainly appears as if the Russians are broadening their target set.”

Kirby shot down assertions that Russia could have targeted the facility to disrupt foreign security assistance to Ukraine, telling reporters at the Pentagon that the Yavoriv facility was not used for delivering such equipment and materials to the country.

“We've been very careful about not wanting to talk about the routes through which security assistance is getting to Ukraine,” he said. “I would just tell you that we have multiple routes to get security systems into the hands of the Ukrainians. This was not one of them.”

The U.S. continues sending security assistance and President Joe Biden on Saturday approved an additional donation of $200 million in defense material from Defense Department stocks to Ukraine, according to the White House. In total, the U.S. has pledged $1.2 billion in security assistance to Ukraine in the past year.

“We are in constant communication with our Ukrainian counterparts about the types of assistance that they need,” Kirby said.

Russia launched the missiles that struck Yavoriv from long-range bombers in Russian airspace — “not from inside Ukrainian airspace” — the official said, noting a no-fly zone over Ukraine would not have prevented the missile strikes.

“For the advocates of a no-fly zone, this is an example of [how] a no-fly zone inside Ukraine would have had no effect on this particular set of strikes,” the official said.

Ukraine President Volodymyr Zelenskyy, among others, has called for the United States and other NATO countries to enforce a no-fly zone over Ukraine as Russia continues its airstrikes on the country.

NATO members have rejected a no-fly zone because it would draw alliance forces into direct combat with Russian warplanes.

“Last year, I warned NATO leaders: if there are no strict preventive sanctions against Russian, itʼll start the war. And I was right,” Zelenskyy said, according to a Monday tweet by the Ukrainian Ministry of Foreign Affairs. “I repeat once again: if you donʼt close our sky, Russian missiles will fall on your territory, on NATO territory. Itʼs only a matter of time.”

As of Monday, Russia has launched more than 900 missiles into Ukraine, the official said.

The Sunday strikes came after Russian troops launched long-range ballistic missiles Friday at two military airfields in the western Ukraine cities of Luska and Ivano-Frankivsk, which are about 70 and 130 miles from the Polish border, respectively.

While those strikes weren’t the first time that Russia had targeted areas in western Ukraine, its forces have largely stayed away from the part of the country that borders NATO nations such as Poland and Slovakia, and their ground forces remain in eastern Ukraine.

"It's not like there hasn't been any airstrikes in western Ukraine since the beginning of this operation 16 days ago, it's just that we haven't seen that as a routine,” Kirby said Friday. “Now you've got two in one day. That's notable."