Poland, in Russia’s shadow, nervous as war in Ukraine intensifies 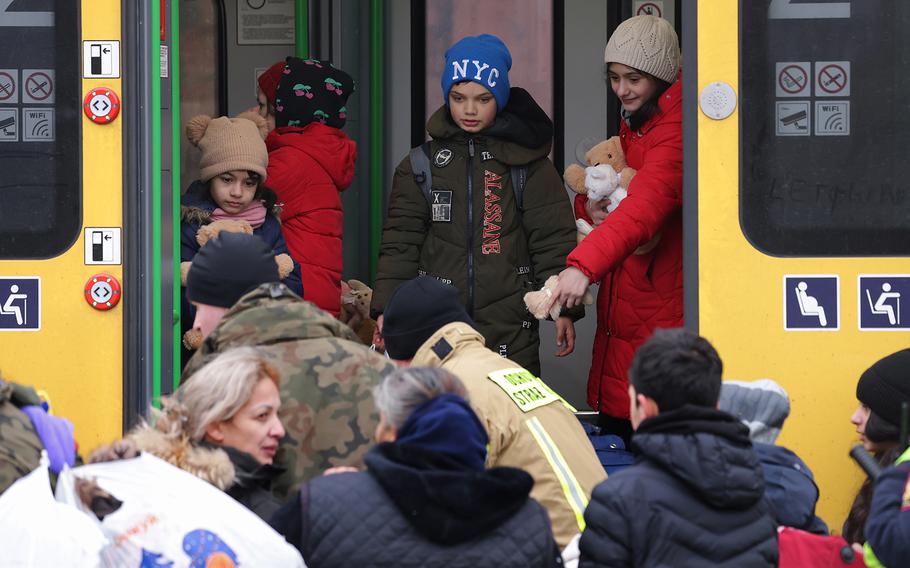 People board a train following their arrival from war-torn Ukraine at the Medyka border crossing on March 9, 2022, in Medyka, Poland. Over 1 million people have arrived in Poland from Ukraine since the Russian invasion of Feb. 24, and while many are now living with relatives who live and work in Poland, others are journeying onward to other countries in Europe. (Sean Gallup, Getty Images/TNS)

WARSAW, Poland — Justina Dziwicka was not yet born when Poland shed the shackles of the Soviet Union and joined NATO, the U.S.-led alliance that would protect the Eastern European country. But the child-care worker is getting a swift lesson on what a Russian-generated conflict looks like.

“I feel that the war came to my country,” she said. “And I feel terrible.”

Dziwicka stood on a street corner here in central Warsaw, the Polish capital, waiting to cross a busy boulevard. On one side of the street was the main train station, where on her commute, Dziwicka sees increasingly large numbers of refugees filling the corridors and spilling outside.

On the other side of the street was the hotel where Vice President Kamala Harris is staying for her visit this week.

Harris is holding meetings in Poland on Thursday and Romania on Friday with the countries’ leaders in an effort to reassure the deeply nervous former East Bloc nations that with their membership in NATO — and backing from Washington — they remain safe.

The two countries also want assistance in sheltering many of the more than 2.1 million refugees who have fled the ferocious Russian onslaught in Ukraine. It is the fastest-growing exodus in Europe since World War II.

“I’m here, standing here on the eastern flank of NATO to reaffirm our commitment, the United States commitment to Poland and our NATO allies,” Harris told Polish Prime Minister Mateusz Morawiecki on Thursday in her first appearance here. They sat with empty tea cups in Morawiecki’s official office. Both said they wish they were meeting under different circumstances.

Harris thanked the Polish people and said she would discuss ongoing promises to provide defensive weapons to Poland and help with processing refugees.

At 22, Dziwicka has never known a time when her country was aligned with Russia. Poland on Saturday will celebrate the 23rd anniversary of the day it joined the North Atlantic Treaty Organization.

Still, there’s a sense of vulnerability and fear that is more pronounced in Poland and Romania — as well as the three Baltic states northeast of Poland — than in older NATO member countries, given both their history of Soviet domination and their location. Poland sees itself once again in the crosshairs of a superpower struggle with potentially catastrophic outcomes. 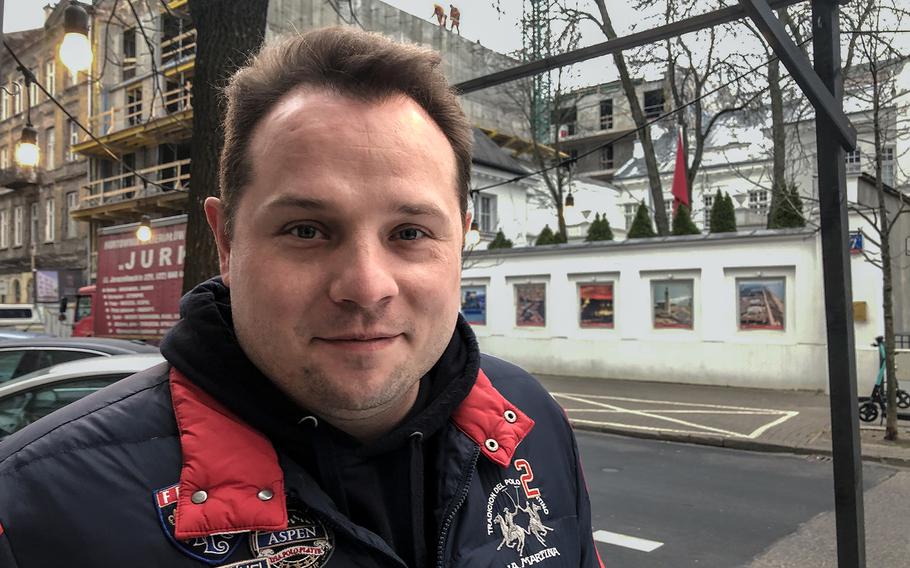 “We have one crazy man … and he sits in the bunkers,” said Max Mrozowski, a 39-year-old entrepreneur on a smoking break, referring to Russian President Vladimir Putin. “He’s killing people, slaughtering children in Ukraine.”

“So it may also come here,” he said. “You never know. He might find any kind of reason to start it.”

Mrozowski sounds stoic but is keeping close tabs. He knows Poland’s NATO anniversary is near. He thinks about Hitler and World War II and draws worrisome comparisons. Asked about the idea of his country sending fighter jets to Ukraine, he cites Ukrainian President Volodymyr Zelenskyy’s calls for more help from the West but then points out the potential for giving Putin pretext for more aggression.

The Harris mission became complicated at the last minute when Polish officials — surprising their U.S. counterparts — announced that rather than send Soviet-era fighter jets to Ukraine, as Ukraine has sought, they were sending the aircraft to the U.S. Air Force base at Ramstein, Germany.

This was Poland’s way of extricating itself from a transaction that risked inviting Putin’s wrath. But it turned what had been careful U.S. negotiations on their head and left American officials struggling to make sense of it.

While rejecting the offer and calling the Polish preference to have the U.S. deliver the planes to Ukraine “untenable,” Biden administration officials have sought to downplay the obvious wrinkle in much-vaunted NATO unity.

The Pentagon then announced it had positioned two Patriot antimissile batteries in Poland as what an official called a “purely proactive” measure to protect NATO’s eastern flank from Russian air attack — another sign of deep worries about Moscow’s aggression.

“The Poles are nervous, of course they’re nervous,” Daniel Fried, a veteran diplomat and former U.S. ambassador to Poland now at the Atlantic Council think tank in Washington, said in an interview. “They have the Russian army destroying their neighbor ... and making nuclear threats. [Putin] hates the Poles, not quite as much as he hates the Ukrainians.” 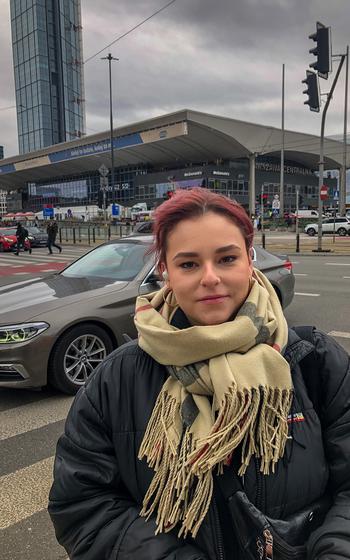 Justina Dziwicka, a child care worker, stands in front of the main train station in Warsaw that has become a hub for Ukrainian refugees. Born after Poland joined the North Atlantic Treaty Organization, she has never known life under Soviet domination. (Noah Bierman, Los Angeles Times/TNS)

This presents Harris with a formidable challenge, Fried said. “She must listen to the Poles,” he said, to their concrete concerns and fears. And she must explain the longer-term U.S. posture toward Russia and elaborate not what the U.S. cannot do for Ukraine — like send fighter jets — but what it can do.

“She knows this is messy,” Fried said. “She’s going to have a helluva time.”

Poland’s tumultuous history — just in the last century — took it from a Nazi occupation in the 1930s and ‘40s that bore witness to some of the deadliest slaughters of Jews, to the ranks of one of the largest economic powers within the Soviet sphere. It then took the lead of the anti-communist movement under the auspices of labor leader Lech Walesa, garnering crucial support from then-Pope John Paul II, a Pole. More recently, a once-flourishing democracy has taken a regressive turn against judicial and press freedoms under President Andrzej Duda, an admirer of former President Trump, a fellow right-wing populist.

Warsaw’s modern glass skyscrapers share a skyline with the Stalinist Palace of Culture and Science over low-rise Soviet-era apartment buildings, a mix of architecture reflecting decades of change. Younger people with brightly dyed hair and fashionable shoes eat from chic cafes that serve traditional pierogis along with coffee and cakes.

But another chapter unfolds now at the train station.

Refugees from Ukraine who spilled into the tents outside the station carried suitcases or pulled pet dogs on leashes, having left behind apartments and relatives, not knowing where they would wind up. Volunteers handed out water and sandwiches and processing paperwork; a truck provided free internet access.

Mamoud Krgbo, who was born in Sierra Leone and met his wife in Ukraine, stood with her and their 4-year-old daughter, trying to hail a cab to the airport. They had plane tickets to Ireland — a country they chose in a hurry — but did not know whether they would be allowed in.

He had little hope that Harris or any other politician would be able to give Ukraine the help it needs.

“It’s a disappointment,” he said. “They are just talking.”