‘Every inch of NATO’: Blinken seeks to deter any Russia thought of pushing beyond Ukraine 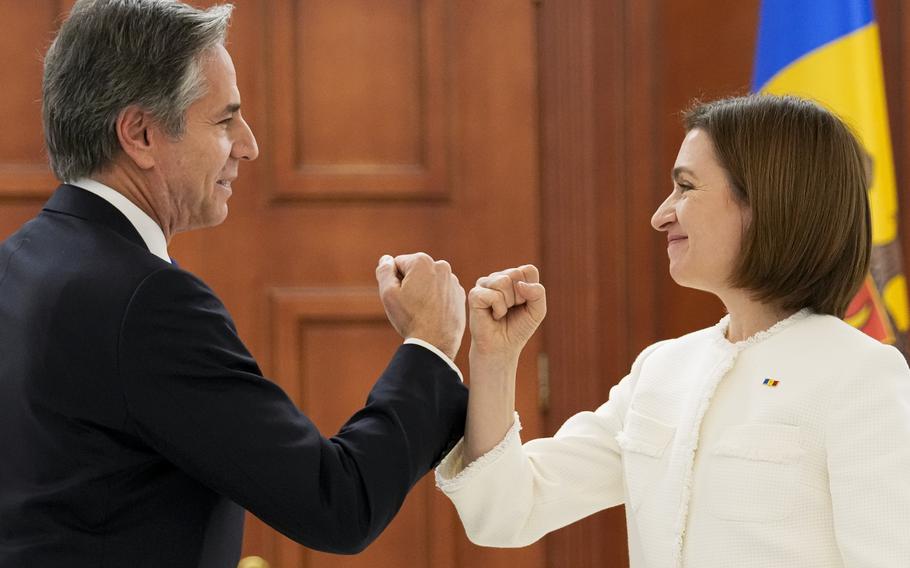 TALLINN, Estonia — At nearly every stop on his whirlwind European tour over the last week, U.S. Secretary of State Antony Blinken had an identical message seemingly directed straight at Russian President Vladimir Putin.

“We will defend every inch of NATO territory with the full force of our collective power,” he said during a visit to Tallinn, Estonia on Tuesday, in what became a verbatim refrain throughout his six-day sprint from Brussels to the Baltics.

Blinken’s trip, capped by a brief stopover in Paris on Tuesday for talks with President Emmanuel Macron, was an attempt to illustrate Western unity and a warning to Putin to banish any thought of lashing out at NATO nations as he presses deeper into Ukraine. It unfolded as Putin’s invasion becomes more deadly and the West’s unprecedented economic reprisals sends tensions with Moscow to levels not seen in generations.

The sole exceptions to Blinken’s delivery of carbon-copy comments came during an overnight stop in Moldova, the tiny, constitutionally neutral nation where Russian forces occupy a breakaway region; and during a 15-foot incursion into Ukraine, when he strolled past the Polish border with his Ukrainian counterpart as part of a visit to Poland’s border with Ukraine. Because neither Moldova nor Ukraine is a NATO member, they fall outside the curtain of mutual defense that alliance leaders now feel more urgently compelled to defend.

Blinken’s message, which echoed President Joe Biden’s State of the Union address, was especially pointed during his stops in Latvia, Lithuania, Estonia and Poland. Those countries could be among those affected should Putin act on his wish to roll back the presence of NATO troops and equipment in Europe back to lines of the late 1990s, before the alliance admitted former Soviet republics and Warsaw Pact nations.

While most Baltic officials have said they do not see an immediate military threat from Moscow — in part because Russian forces are now bogged down in Ukraine — countries across the alliance have been unnerved by Putin’s willingness to use force and his ominous references to “consequences” for countries that obstruct him. As the Russian leader appears increasingly isolated, questions have intensified about his decision-making and access to accurate information.

Even as NATO Secretary General Jens Stoltenberg insists that NATO is not a party to the Ukraine conflict, the alliance has announced the deployment of additional troops and weaponry to its eastern reaches. Member countries are also stepping up their supply of weapons to Kyiv, as Ukrainians vow to defend their nation no matter the cost.

Estonian Prime Minister Kaja Kallas, speaking after talks with Blinken, called for the world to “adopt a new reality, raising the cost of aggression to Russia.”

That must include, she said, further steps to isolate Russian and Belorussian banks and to reinforce NATO defenses in Eastern Europe. Estonia has announced it will increase its defense spending, while still small in absolute terms, to 2.44% of its GDP by next year.

“Russia expects us to make a step back soon,” she said. “So we will prove them wrong. They will come to test us, and yes, we will have to resist.”

The specter of a wider conflict hangs over debates about how far the West should go in supporting Ukraine. While Ukrainian President Volodymyr Zelensky has pleaded for additional military aid, NATO nations have ruled out establishing a no-fly zone, saying it would probably trigger a Russia-NATO war. But alliance nations have appeared more open to Zelensky’s request for donated fighter jets, judging that Moscow’s response would be more muted to such a step.

Late on Tuesday, the Polish government said it was ready to put its fleet of Soviet-designed MiG-29s under U.S. control at Ramstein Air Base in Germany, and called on other NATO states to do the same. The United States all but declined the offer from Poland.

“We do not believe Poland’s proposal is a tenable one,” said Pentagon spokesman John Kirby.

“The message that Secretary Baker heard at that time from Estonia, from the Baltics, was: ‘The hard-liners will come back, please help us; they’re going to come back and try to snuff out our independence,’” Roraff said during a meeting that Blinken held with embassy staff. “Thirty years later, the region still faces a Russian threat.”