MUKACHEVO, Ukraine — Local officials in the southern Ukrainian city of Kherson said Friday that Russia is not living up to its side of the bargain on proposed “humanitarian corridors,” even as supplies of food and other necessities begin to dwindle in the region.

Leaders from Ukraine and Russia announced Thursday they had agreed to temporary cease-fires to support “humanitarian corridors” for civilians to be evacuated and so food and medicine could be delivered. But local Ukrainian officials in the Kherson region say that the Russian military is not working with them and is instead pushing a plan to distribute its own aid unilaterally.

Regional governor Gennady Laguta wrote on Facebook on Friday that the “occupiers” had not given the go-ahead to send humanitarian aid to the Kherson region through the proposed corridor. Laguta said that Ukrainian authorities had readied 19 trucks, but they were not yet being allowed to go in. The Russians “are saying that they will provide humanitarian aid themselves,” Laguta wrote.

In his own message to Facebook, Kherson Mayor Ihor Kolykhaiev said that the agreement was not helping the city. “Despite yesterday’s agreements at the highest level, in practice,” Kolykhaev wrote, “all this is not yet working.”

“Apparently, the ‘good liberators’ are preparing to bring their ‘salvation’ to Kherson. First, they brought the situation to a critical point, and then they will heroically rescue us,” Kolykhaev wrote, referring to Russia.

A vital port and Black Sea shipbuilding city of almost 290,000 people that lies northwest of the Russian-occupied Crimean peninsula, Kherson was among the first Ukrainian cities that Russian forces targeted as they swept into Ukraine. Eyewitnesses say it is the first major city to fall to Kremlin forces, though Ukraine’s Defense Ministry has not confirmed it is controlled by Moscow.

The city, which lies on the Dnieper River, is considered strategically important as its occupation could help Russia cut off Ukrainian forces from the Black Sea coast. Russian forces have also targeted Mariupol, another southern port city, and many expect Russian troops to move on Odessa in the west soon a well.

Any delay in the deliveries of supplies to Kherson could have a serious impact on civilians. In an interview on Thursday, the secretary of the city council, Galina Luhova, said the city was low on medicine and food, and facing a “global catastrophe” if no solution could be found.

“In Kherson, we are running out of food — literally, we can still last for maybe three, four days,” Luhova said in a telephone interview on Thursday. The fighting has left large portions of Kherson without electricity and running water. “People are in a panic, people are tense, people are frightened just to the core of their souls,” she said.

Kolykhaev said Russian forces were preventing Ukrainian government officials from bringing in supplies, mobile communications had faced problems and the local television center had been taken over. “I give you my word: I do what I can. But I don’t know how long it will take. Please: think, stay human, help each other,” he said.

Though Russian troops have suffered set backs in their offensive and have failed to take Ukraine’s capital, Kyiv, they have had more success in the south and east of the country.

The mayor of Mariupol said Thursday that a Russian siege and hours of shelling that battered rail links and bridges had cut off water, power and food supplies. The mayor of Odessa said the population was preparing to mount a defense amid unverified reports that a large fleet of Russian warships was heading toward waters off the coast. 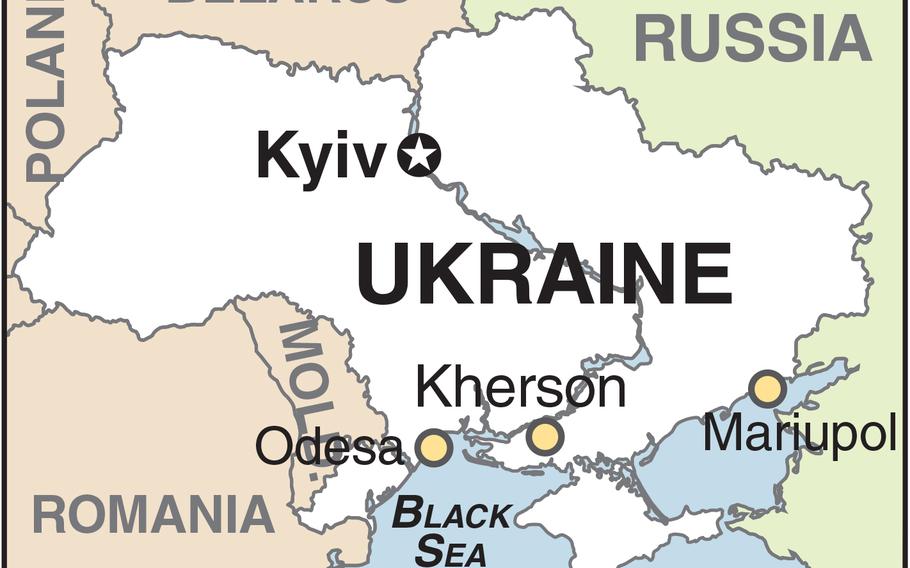