He loaded his minibus with supplies and drove over 1,000 miles to Ukraine to help refugees 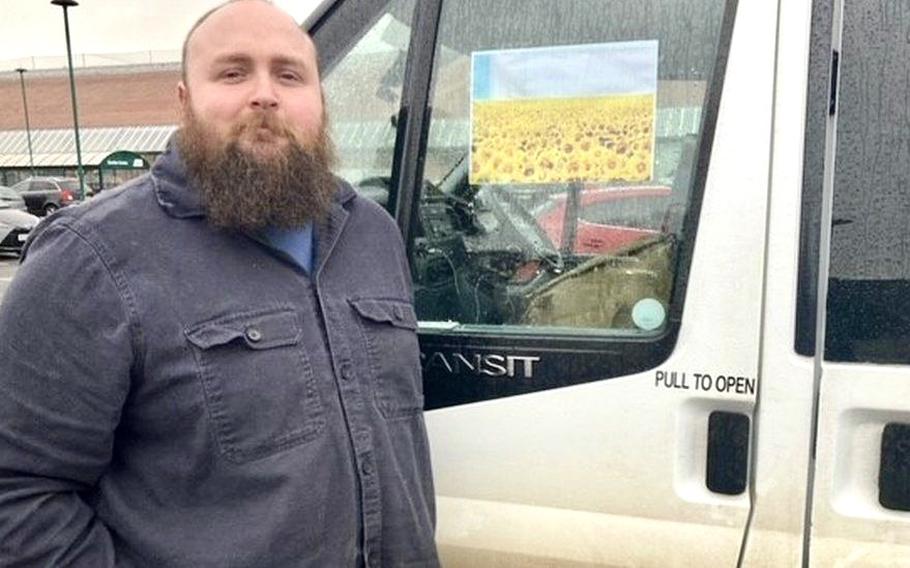 Tom Littledyke drove 1,000 miles from his home in Lyme Regis, U.K., to Ukraine's border with Poland to deliver supplies and transport refugees to safety. (Courtesy of Tom Littledyke)

As the Russian onslaught intensified in Ukraine, Tom Littledyke decided he could no longer sit idle.

During a restless sleep Sunday night, the U.K.-based pub owner got an idea: He would drive more than 1,000 miles from his home in Lyme Regis — a tiny coastal town in West Dorset, England — to the Ukraine-Poland border, where thousands of displaced Ukrainians are seeking to flee their besieged country.

Littledyke, 31, decided to fill his 16-seater minibus with essential supplies and deliver them to refugees.

He and his partner, Georgia Wellman, put out a plea on social media soliciting support. They created a JustGiving page, with the goal of raising about $1,000 to purchase supplies. Within several days, they had collected more than $15,000.

“I had no idea it could reach so high so quickly,” Littledyke said. “It has blown away my expectations of what people are capable of.”

Seeing harrowing photos of innocent Ukrainians, especially children, being uprooted from their homes motivated Littledyke to do something. Although he has no direct ties to Ukraine, witnessing the way the country has been attacked compelled him to act.

“As soon as I saw images of children and people being taken away from their families and ripped away from their normal lives, I couldn’t help but think, ‘What if that was my loved ones?’ ” Littledyke said.

Before Littledyke left Lyme Regis at noon on Monday, he and Wellman told the local community about their efforts and said they would leave the minibus unlocked in front of their home in case anyone had supplies to donate.

“Within an hour and a half, the minibus was full of kids’ toys, food, sanitary products, sleeping bags, thermals and tents,” said Wellman. Neighbors donated “anything and everything that people thought they needed.”

“It’s just amazing, the generosity of people,” she added. 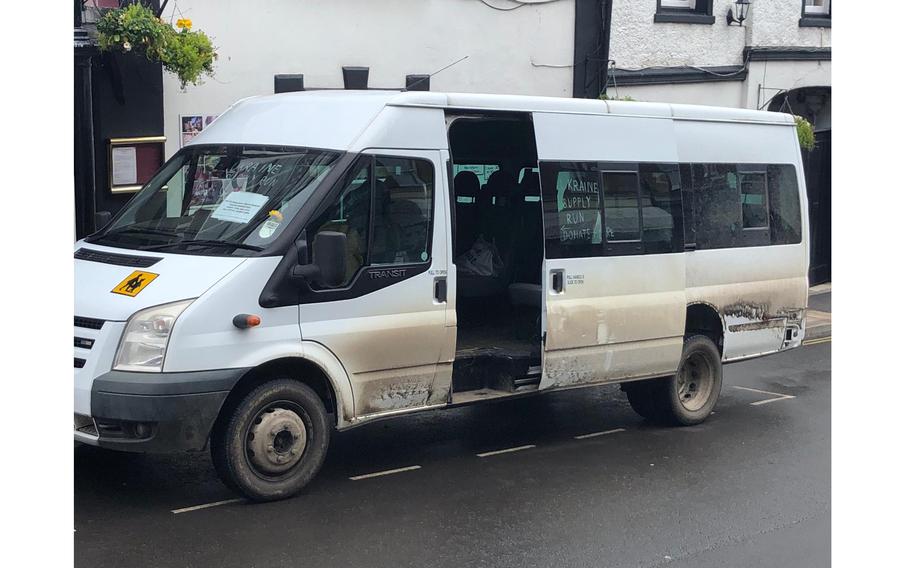 Neighbors filled Tom Littledyke's minibus with supplies while it was parked outside his home in Lyme Regis, U.K. (Courtesy of Tom Littledyke)

Littledyke called it “a real mark of humanity for me to see how clearly people want to help.”

“People’s inspiration has inspired me to keep going and hopefully inspire others so that we can just continue this chain of making things happen,” he said.

Littledyke embarked on a solo, 1,000-mile mission, which took him 28 hours, including breaks to rest. He arrived at the border at midnight Tuesday and was immediately overwhelmed by what he saw.

“I felt pure sadness for the fact that it was such a horrible way for these proud people to leave their country,” said Littledyke, who was a member of the Royal Marines Reserve. “It was barren and dark, and they had these posts designed to keep people out.”

Since Russia waged war last Thursday, more than 1 million people have fled Ukraine and crossed into neighboring nations. Groups of displaced people are congregated at border crossings, clustered tightly to combat the cold. Drivers, including Littledyke, have had to wait in miles-long lines to pass.

Littledyke’s initial plan was to deliver supplies to Ukrainians at the border and at refugee camps in Poland, but once he saw the dire need for transportation, he decided to start driving groups of Ukrainians from a busy train station in Lviv, Ukraine, to the border near the Polish village of Korczowa “so they could cross into Poland,” he said.

When he pulled up at the Lviv train station, “all these people were huddled around, crying, holding their children, waiting for buses in the thousands,” said Littledyke, who also transported men back to Ukraine to fight in the war after they dropped off their families at the border.

“The pride that you can see from all the Ukrainians is palpable. It’s humongous,” Littledyke said. “What I’ve seen is pure strength.”

So far, he has taken several trips from the train station to the border and has brought with him about 65 refugees. Mainly, he has transported women, children and older adults. Although there is a language barrier between most people he has encountered, Littledyke has managed to build a bond with many of his passengers.

When some of the refugees realized he hadn’t eaten in nearly a day, he said, they eagerly offered him coffee and sandwiches.

While Littledyke — who has been chronicling his trip on Facebook — is out on the road, Wellman has stayed home with their dog, Bucky. In her partner’s absence, she has been managing their pub, cafe and restaurant, all three of which they run together.

Wellman also has been contacting refugees on social media, then sending Littledyke their locations and information so he can pick them up.

“I’ve been dealing with the admin. side of it,” Wellman said.

Although she is worried about Littledyke, “I couldn’t be more proud” of him, she said.

She described him as “brave, big-hearted and a little bit crazy.”

Seeing the need up close, the couple has decided to organize an additional trip in coming weeks with a group of volunteers, who will travel with supplies in a convoy of cars.

“I’ve been receiving so many messages from people begging to join me on the next one,” Littledyke said, adding that he will use the funds raised to secure supplies, equipment and medicine.

“The more people I’m able to bring with me, so they can see what’s happening here, the more they can spread the message. It just echoes on, and we can keep helping,” he said.

Littledyke, who plans to be back in the United Kingdom by Friday, said the experience has been a whirlwind.

“I’ve been running on pure adrenaline,” he said.

Given the awful circumstances, he said, there’s nowhere else he’d rather be.

“I will never regret being here,” Littledyke said. “I feel very humbled by the fact that I’ve been able to help others.”