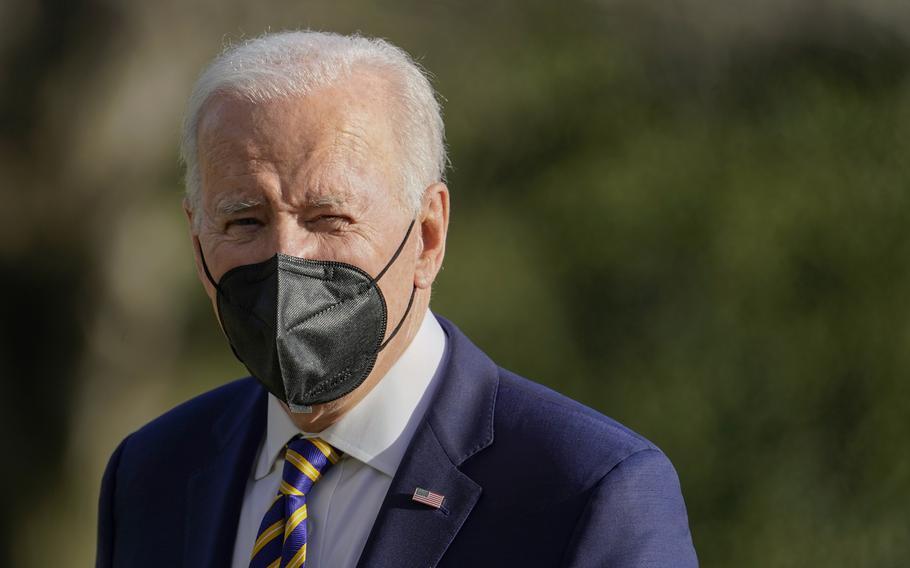 President Joe Biden walks on the South Lawn of the White House after stepping off Marine One, Thursday, Feb. 10, 2022, in Washington. (Patrick Semansky/AP)

The Biden administration’s warnings of a Russian invasion of Ukraine have taken on the feeling of the Weather Channel tracking a hurricane.

Since U.S. officials first bannered the gathering strength of Russian President Vladimir Putin’s forces at the border more than three months ago, they’ve repeated the threat with escalating alarm. Last week, new U.S. assessments emerged that Russian combat firepower had reached 70% of the gale force needed for a full-scale Category 5 assault. The Russia storm, the United States concluded, could overwhelm Kyiv, Ukraine, within two days, leaving as many as 50,000 civilians dead or wounded.

Few things in geopolitical crises are more sensitive than intelligence. And yet, from the beginning of the Ukraine crisis, the Biden administration has been extraordinarily vocal about U.S. knowledge of Russian movements, tactics and planning. One analyst dubs it “Biden’s megaphone strategy.” Others say you need to go back years to find a similar crisis where a U.S. administration has shared this much information with this level of specificity this quickly.

“This is unprecedented, even going back to before my professional life,” said John E. Herbst, the U.S. ambassador to Ukraine between 2003 and 2006, told me. “Maybe you could compare it to the [1962] Cuban missile crisis ... [or] the build up to war in Iraq.”

There can be strategic reasons for being tight-lipped. Too much detail can compromise intelligence assets and risk future access to information. But there’s another big reason for discretion. Intelligence gathering and processing is more art than science, a tapestry of secrets held together by analytical assumptions. Intelligence can be — and often is — spun, and can be — and often is — wrong. The textbook example: U.S. warnings of Saddam Hussein’s nonexistent weapons of mass destruction, which were both spun by the Bush administration, as well as wrong.

That doesn’t mean U.S. assessments are off now — or that the Russian bear won’t claw its way into Ukraine. In fact, so far, the sense of Herbst and others is that the administration has gotten this right.

The administration has also been increasingly clear on what it doesn’t know: Whether Putin has made the critical decision to actually invade. That finer point came into focus after an exasperated Ukrainian President Volodymyr Zelenskyy decried Washington’s breathless warnings for causing “panic.” Last week, the White House backtracked on using the word “imminent” to describe the prospect of a Russian attack.

Some argue the administration is erring on the side of caution because it is sensitive to its foreign policy failures over the past year, particularly the sense that the U.S. government defense apparatus completely miscalculated the speed of the Taliban takeover in Afghanistan, which led to a messy withdrawal and broad recriminations.

That doesn’t mean its warnings are being taken at face value. As it borders on oversharing — President Joe Biden even said a “minor” Russian incursion would be tolerated in a gaffe that had the ring of candor — the administration is in a jam over the credibility of U.S. intelligence and the reliability of its disclosures.

That distrust went on full display last week, when the administration outlined a deep fake operation allegedly being weighed by the Russians as a pretext for invasion, and for which the Ukrainians would be falsely blamed. State Department spokesman Ned Price told reporters about the production of a Russian video with “graphic scenes of false explosions — depicting corpses, crisis actors pretending to be mourners and images of destroyed locations or military equipment — entirely fabricated by Russian intelligence.”

“Where is the declassified information?” Matthew Lee of the Associate Press asked.

“I just delivered it,” Price said.

“No, you made a series of allegations,” Lee responded.

“The exchanges were ... a sign of increased skepticism of the Biden administration when it comes to intelligence and military matters, particularly after officials failed to anticipate how swiftly the Afghan government would fall to the Taliban last year and initially defended a U.S. missile attack in Kabul as a ‘righteous strike’ before the Pentagon confirmed the action had killed several civilians but no terrorists,” ruled Chris Megerian of the Associated Press.

But many observers say the administration is tactically smart to get out in front of any Russian operation in precisely the way it’s doing.

Overwhelming disclosure has enabled Washington to present a highly public case for a real and present danger, narrowing the daylight between the U.S. and European allies on decisions for high sanctions for Putin that could ultimately serve as a successful deterrent to invasion. Differences between allies on a coordinated response no doubt still exist — but even the reluctant Germans are beginning to talk tougher.

And if Putin had hoped for a stealth attack, he now has the eyes of the world watching.

“The Biden administration has waged a campaign of deterrence in what the Russians sometimes call the ‘information space,’ “ wrote The Washington Post’s David Ignatius. “To mobilize allies, U.S. officials have shared sensitive intelligence about Russia’s moves; when they’ve detected Russian plots, they’ve disclosed them. These aggressive tactics have checked Russia’s usual advantages of surprise and stealth.”

“Radical transparency” may be the best way to deal with Putin’s dark tactics.

“Russia’s hybrid war is based on sowing confusion and disinformation,” Richard Gowan, an International Crisis Group analyst, told Spanish newspaper El Pais. “By adopting radical transparency, the U.S. is complicating Russia’s task of disseminating disinformation about its actions. The Russians have tried to ignore or dismiss the accusations, but they have also had to go on the defensive in public. And this extreme transparency also makes things easier for Washington when it comes to keeping NATO’s allies more or less united.”

Still, the decision to play this one anything but close to the vest harbors risks. For one, if it is a bluff, then calling Putin on it might trigger action he never intended. “This megaphone diplomacy could make it complicated for Putin to do nothing,” Gowan added. “Now it will be harder for him to back off without a certain sense of humiliation.”

Another risk: That Russian troop movements are simply a ruse to capture the West’s attention, ice Ukraine’s hopes of ever joining NATO, test the will of the United States and Europe, and force a dialogue over its claimed security concerns.

“What if this diplomatic show was exactly what Putin wanted out of his move?” wrote Foreign Policy columnist Caroline de Gruyter. “What if the West played into his hands by trying to deter him? What if the West actually fell into his carefully laid trap?”

If there is no invasion, the United States and Europe could still be dragged into a long, diplomatic morass over Ukraine’s future that will suck time and energy from other important global affairs.

But that’s still better than war, which the administration could claim to have headed off by calling Putin out — or at least say it tried if he does invade.

“The downside is not so high. If it doesn’t happen, everyone will be saying ‘Thank God it didn’t happen,’ “ Herbst said. “I actually believe it’s highly unlikely the Russians will do a major operation, and less than 50% of something minor. But I believe that is because the Biden administration has been solid on this.”