As warnings fly between US and Russia, how real is the threat of war in Ukraine? 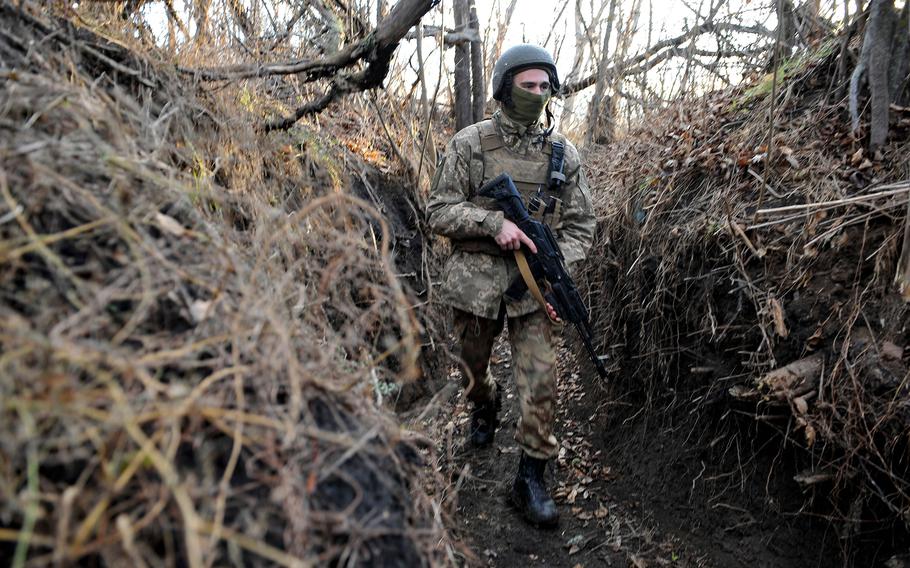 A Ukrainian service member walks along a trench on the front line with Russia-backed separatists near the village of Talakivka, Donetsk region, on Wednesday, Nov. 24, 2021. (Sergey Volskiy, AFP via Getty Images/TNS)

(Tribune News Service) — So far, it’s been a war of words. Could it flare into something more dangerous?

Against the backdrop of a major buildup of Russian forces near Ukraine, a former Soviet republic and struggling democracy sandwiched between Russia and the West, the rhetoric and prospect for conflict have been sharpening daily.

U.S. Secretary of State Antony J. Blinken, meeting his Russian counterpart in Stockholm on Thursday, explicitly warned Moscow against an invasion — a scenario that Ukraine’s government, backed by both NATO and the Biden administration, has described as a real possibility. The Kremlin, in turn, has hinted that an intervention by its troops may be necessary to halt escalating separatist fighting in eastern Ukraine.

Much of what unfolds in coming days or weeks is up to Russian President Vladimir Putin, whose motives and intent are not entirely clear. Analysts say that as always, Russia’s autocratic leader is cannily weighing risks and benefits — determining whether concessions he might extract by threatening Ukraine are worth the now-heavy odds of punishing Western sanctions and the chance of a domestic backlash if Russian troops suffered significant casualties.

“Putin is definitely as serious as he could be,” Hanna Shelest, a leading Ukrainian security expert, told an Atlantic Council webinar on Thursday. “He’s definitely raising the stakes in this game.”

Although the direct involvement of American ground troops is considered a nonstarter, Washington sees Ukraine as a close partner, and the U.S. has for years provided sophisticated weaponry, including Javelin antitank missiles, to the Ukrainian government.

And even sometimes fractious European allies are showing notable solidarity in warning of painful economic consequences should the Russian leader become overly aggressive.

Here is a look at some of the factors at play in Ukraine’s latest crisis.

How serious is Russia’s buildup of forces?

After Putin’s audacious 2014 seizure of the Black Sea peninsula of Crimea — which Moscow then illegally annexed — Ukraine has considered itself to be under constant threat.

Supporters say that’s with good reason: Russia backs a separatist movement in eastern Ukraine’s Donbas region, where fighting has killed about 14,000 people, according to international observers. And Moscow has periodically made seemingly menacing troop movements. In the spring, the United States European Command heightened its alert level after Russia moved forces within its own borders closer to Ukraine and deployed some units into Crimea.

Russia’s recent military activity near Ukraine has set off alarm bells not only in Ukraine’s capital, Kyiv, but in Washington and Europe as well. U.S. intelligence indicates Moscow has positioned about 100,000 troops and heavy weaponry that could allow a swift, large-scale, multi-pronged attack on Ukraine.

How has the Biden administration responded?

Blinken minced few words in his meeting Thursday with Russian Foreign Minister Sergei Lavrov, declaring that if Moscow “decides to pursue confrontation, there will be serious consequences.”

As the two met on the sidelines of a ministerial meeting in Stockholm of the Organization for Security and Cooperation in Europe, the secretary of State stressed the United States’ “strong, ironclad commitment to the sovereignty and territorial integrity of Ukraine.”

Defense Secretary Lloyd J. Austin III too has been outspoken on the subject. On a visit to South Korea on Wednesday, he said the U.S. and the international community would act in concert to counter any Russian military moves in Ukraine. Asked whether he was speaking of steps such as economic sanctions, Austin didn’t directly respond. But Blinken and Austin, together with other senior officials, have emphasized that diplomacy is the preferred solution.

What has the Kremlin said?

Moscow’s principal tactic has been to turn the situation on its head and accuse Ukraine — far weaker militarily — of being the aggressor. Kremlin spokesman Dmitry Peskov, who is close to Putin, on Thursday cited Ukrainian authorities’ “increasingly intensive provocative action” against pro-Russia separatists. In a conference call with reporters, Peskov also complained that comments by Ukrainian President Volodymyr Zelensky, who has said Russia is preparing to invade, showed that “the Ukrainian leadership doesn’t rule out a forceful scenario.”

Lavrov, in Stockholm, repeated Putin’s warnings against North Atlantic Treaty Organization military assistance to Ukraine — and reasserted the Kremlin leader’s position that granting membership in the alliance to Ukraine or other states Russia that considers to be within its sphere of influence would be a grave mistake. A NATO expansion, he said, would “infringe on our security.”

All in all, Kremlin spokesman Peskov said, “the probability of hostilities in Ukraine still remains high.”

Ukraine is not a NATO member, though it aspires to be, so an attack on it does not trigger the 30-member alliance’s founding principle that an attack on one is an attack on all. But NATO Secretary-General Jens Stoltenberg says defensive military support by the alliance for Ukraine is in line with international obligations. And Stoltenberg this week rejected Putin’s demand that NATO promise to refrain from eastern expansion, saying Moscow “does not have a veto.”

What does Putin hope to gain?

The Russian leader wants a host of things, particularly an easing of sanctions. But analysts also point to Putin’s overarching desire for the West to acknowledge him as the legitimate leader of a great power. The onetime KGB spy never accepted the new world order after the 1991 breakup of the Soviet Union, longtime Putin observers say. Most of them doubt he will ever give up his ambition to be the primary arbiter of not only Ukraine’s energy wealth, but also its political destiny.

As a perennial sore point, Ukraine’s situation leaves Washington and its allies with an “uncomfortable dilemma,” Alexander Baunov, a senior fellow at Carnegie Moscow Center, wrote this week on the blog Carnegie.ru.

The choice, Baunov said, is “whether to boost Russia’s status, thereby rewarding the dangerous exploitation of a simmering conflict, or refuse to give Moscow the promises it desires, thus conserving the conflict in its heated state.”

Despite President Biden’s stated wish for a stable relationship with Russia, Putin is likely to keep actively sowing discord in the West. Few believe that the migrant crisis in Belarus — in which Alexander Lukashenko, dubbed “ Europe’s last dictator,” deliberately funneled desperate migrants from the Mideast and elsewhere to the EU’s eastern borders, in Poland and Lithuania — would have happened without his knowledge and assent.

“This is a Russian-instigated crisis,” he told the Atlantic Council webinar. “We shouldn’t reward them for taking down a crisis that they put up.”