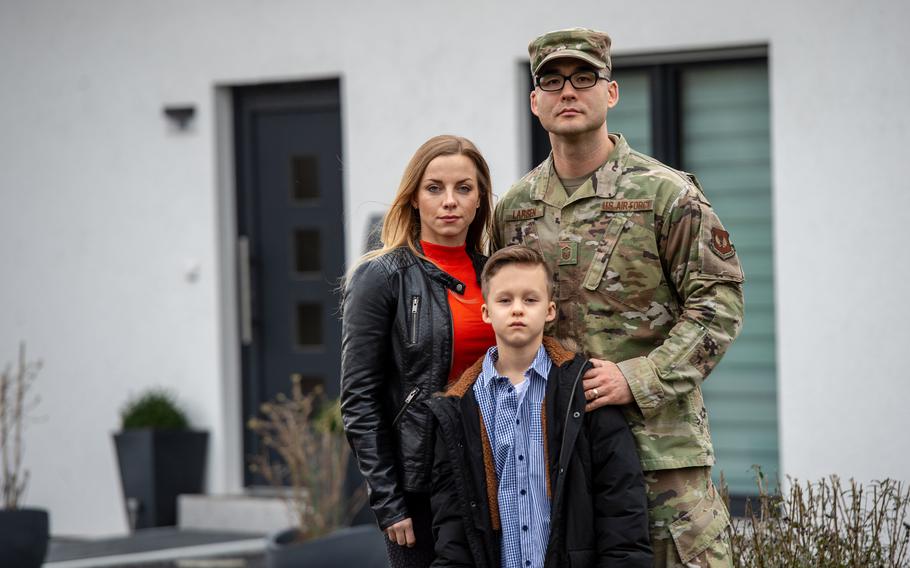 STUTTGART, Germany — German authorities have fined a recently retired U.S. airman for not paying German income taxes on his military pay, a legally questionable move showing that even after active-duty personnel return to civilian life in America, the German version of the IRS remains on the hunt.

The U.S. State Department has said repeatedly that local tax offices are misinterpreting the NATO Status of Forces Agreement by forcing U.S. personnel to pay German income taxes and penalties that have reached six figures in several cases.

But while the issue was broached by Defense Secretary Lloyd Austin with his German counterpart in June and has been discussed among diplomats for over a year, nothing has been done yet to protect service members and Defense Department civilians from the financially ruinous practice.

Matt Larsen, who retired from the Air Force in July soon after the military moved him to Florida, said he was stunned earlier this month to get word that German tax collectors were still trying to track him down.

“I don’t know where to go from here,” said Larsen, who retired as a master sergeant following a tour at Ramstein Air Base. “What’s happening is so unjust and we are not getting any support.”

A Nov. 8 letter from the Kusel-Landstuhl finance office, first delivered to someone living at his former off-base residence, said he must pay a 200 euro fine for not filing German income taxes in 2019.

The relatively small fine represents an opening move. The Kusel-Landstuhl office, which is responsible for much of the area surrounding Ramstein Air Base, has imposed tax penalties as high as $300,000 after military pay and benefits like housing allowances, base discounts on gas, commissary privileges and access to free Defense Department schools get factored in.

Larsen said he has no intention of paying the Germans a fine or submitting his U.S. tax forms. Larsen’s attorney in Germany, Detlev Albrecht, sent a letter this week to the tax office, telling them to back off.

“It is well known (by your office) that Mr. Larsen is a professional airman of the U.S. forces and that there is no legal basis for him to be taxable under the NATO Status of Forces (Agreement),” Albrecht wrote. He said that the office violated its own protocols by issuing a fine before delivering a warning.

The tax office in Kusel did not respond to a request for comment.

The attempt to treat Larsen as a local resident traces back to early 2020, when he was first informed by finance officials that his marriage to a German woman made him a viable tax target.

The case put a spotlight on the financial danger faced by some U.S. military personnel in Germany at the hands of local tax offices, which have argued the SOFA treaty designed to put military pay off limits can be disregarded under certain circumstances.

For years, the U.S. military failed to mount a serious challenge against German tax collectors, a situation that left personnel fending for themselves in disputes with finance offices. But Larsen’s case, first reported by Stars and Stripes, elevated the matter to high levels of government in Washington and Berlin.

“State and DOD are engaging with local and national German officials on a range of levels, but we do not publicly discuss the contents of our diplomatic conversations,” said a spokesman for the U.S. Embassy in Berlin in a recent statement to Stars and Stripes. “Our position remains that the vast majority of these cases are brought under a misinterpretation of the NATO Status of Forces Agreement, and we are working strenuously in concert to protect the rights granted under that agreement.”

The U.S. says the troops and civilian personnel on military visas are exempt from local taxation on their U.S. paychecks.

But some German tax offices say that under Article X of the SOFA, military personnel are protected if they come to Germany “solely” for their jobs.

Marriage to a German citizen, extending tours, buying property, owning a German specification car and sending a child to a German school could indicate interests in the country that extend beyond the job, according to the German authorities. In such circumstances, some tax offices contend that the military visa’s protections are voided.

Critics call that interpretation hair splitting by small-town tax office workers that violates the intent of the SOFA treaty, an international legal framework that enables the U.S. to base forces overseas.

In no other country where large numbers of troops are based — including Japan, South Korea, the United Kingdom, Italy and Spain — do U.S. personnel face the risks encountered by those in Germany.

While his individual command had his back, he said, higher headquarters, including U.S. Air Forces Europe, U.S. Army Europe and Africa and U.S. European Command have failed to sufficiently sound a warning.

“All you hear is how great it is — all the opportunities in Germany,” Larsen said. “But there are no disclaimers, like what if you are married to a German, or if your send your kids to a local school. There was none of that. They are setting everybody up for failure.”

The exact number of personnel affected by the tax dispute in Germany — where some 32,000 troops are based and thousands of military civilians also work in supporting missions — isn’t known.

German tax offices haven’t been forthcoming about the number of cases they have against U.S. personnel or how much money they’ve seized from them over the years. But last year, the Kusel-Landstuhl office told Stars and Stripes that it alone had about 400 cases against SOFA personnel.